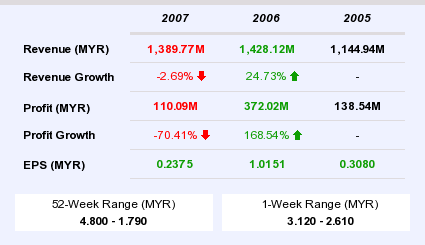 UPDATED 2.30PM: Let’s take a quick look at Puncak Niaga, one of the main water concessionaires in Selangor.

You can see that the firm is making huge profits. (Profits for 2006 were higher as there was a gain arising from the partial disposal of a subsidiary of RM206m in 2006.)

The group had close to a billion ringgit in deposits, cash, and bank balances as at 31 December 2007 and a net current asset ratio of 1.2. In other words, very liquid.

Syabas, which is 70 per cent owned by Puncak Niaga, received a government grant of RM250 million (that’s our money) “solely for the purpose of financing the costs and expenditure of the non-revenue water” to reduce unaccountable water loss.

The federal government also provided a support loan (current carrying amount close to RM80 million) to finance construction of the Wangsa Maju water treatment plant. It was originally repayable over 20 years (from 1999) at 8 per cent interest rate. But in 2004, the federal government “restructured” the loan: the interest rate was reduced to 3 per cent per annum retrospectively and the repayment schedule revised. How thoughtful.

Having made super profits with the help of public money, Puncak Niaga is now asking for a higher price than what the Selangor government is prepared to pay (RM1.6 billion for Puncak Niaga and RM1.5 billion for Syabas) to nationalise water assets in the state.

The total offer price of RM3.1 billion in total is based on the valuation of the water assets using book value (without any liabilities being assumed) as at 31 December 2007:

(Source: Puncak Niaga’s general announcement to Bursa of the letter of offer from Selangor state government dated 13 February. Deadline for acceptance of offer is 20 February.)

For the record, these are the directors of Puncak Niaga (during the financial year 2007):

* This Director had been redesignated to Non-Independent Non-Executive Director with effect from 1 January 2007.

The firm paid out close to RM11 million in directors’ remuneration in 2007.

According to the  Annual Report 2007, these are the number of directors whose total remuneration for 2007 fell within the following bands:

Gamuda also has an interest in water in Selangor. 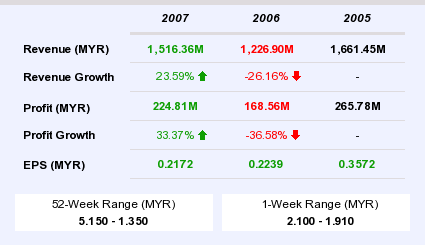 These firms are rolling in profits  – and yet, there could be a 30 per cent water tariff hike in Selangor from April!

To daniel, yes exactly! Selangorians drinking dirty water from river THAT SUPPOSED TO BE MONITORED BY STATE GOVT … and Puncak Niaga treated it and makes it clean. Are you from Selangor? Because if don’t I bet u’ve been drinking ‘teh tarik’ from your water tap now 😉

The Selangor Govt. made a big blunder by privatising the WATER WORKS DEPARTMENT in the first place, before the privation the water rate somewhare in the 60’s was (for domestic supply) 0.40cts for 1.000 gellons, about 4.5 metric cube, and the WATER SUPPLY DEPARTMENT STILL SURVIVE WITHOUT HURTING THE POPULATION OF THE SELANGOR RESIDENCE. But what done is done, back to the present, The latest News how an Executive like Tan Sri Rozali just in a nunber of years manage to inherit A BIG sum of MR that enable him obtain …. this is where our money goes, for the… Read more »

How cruel the ruling government and their cronies can be, (squeezing) the poor rakyat hard earned money this way.
First we have the Highway contracts money…, follow by Electricity(another money milking scam by the BN politicians) and now we have the same greedy issue with Water.
Only God knows, when this will end.
The present Selangor government must take over the water concessionaires at all costs….

Heloo…BN TIPU ORANG KAMPONG LAGI…..this will be out to every villager right from Batu Laut to Sawah Sempadan…… game over.

The profit/cash flow from 2005 or 2006 or 2007 could easily have repaid the govt loans and yet the BN govt gave them an even lower interest rate to pay back ?

If I were Syabas/Puncak Niaga, I wouldn’t repay either at such wonderful rates especially if I can put the same amount of money on deposit for an equal or higher rate.

How do I lobby for such a sweet deal ? Do I need to join UMNO ?

Its so obsene and sickening that these people are getting so much from a resource that should be given at cheapest possible price to the rakyat. Essential services like water treatment and distribution, highways and healthcare must never be privatised so that heartless people like these live like lords while the poor and needy are suffering. What has become of this country???

Botox lah give to all the crony

wah thats bad .at the first who gave them this water project ? must investigate who is behind this stupid rozali….. may be mike got the answer

From the names of the board members it can be seen that this is the BN method of rewarding all component parties at the continued expense of the man in the street!

This is our reward for keeping them in power all these years!

Profitability dropped 70.4% from 2006 to 2007, and yet directors’ fees increased 17% for the same period. This is robbery of shareholders’ value.

And which idiots would want to pay RM10.8m to the directors to make a profit of RM110m, close to 10%?! Of course much of this eventually goes into …

easy money for this umno cronies!

Both Puncak and Plus are very much common, “Day light highway ….”. Our government should learn from the country across the causeway. Their water supply utilities is still under government (PUB)and very well managed and can produced world class water although the raw water is being fed from our country. We have abundent of raw water throughout the country but it is “purposely” poorly managed so that could hand over to people like Tan Sri Rozali Ismail to managed it properly. No end to this unless the government put a stop to unnecessary privatization schemes.

Is the BN governmant that naive to allow a private Company to control the water resources in Selangor and pay a huge sum to to directors at the expense of Rakyat’s money ? Khir Toyo talking like a perfectionist yet right under his nose this has happened ? May be he thougt like in Indonesia , in Malaysia too ” semua bisa di atur”.

Tan Sri Rozali Ismail a felda boy from Gedangsa Felda became a millionaire out of the blues through political connection UMNO …
A lawyer graduate but can hardly articulate … has not contributed anything to society.
The State government should conduct an inquiry as how this Felda boy was awarded such a lucrative project. Dig deeper and don’t let them continue to (take) the rakyat money.