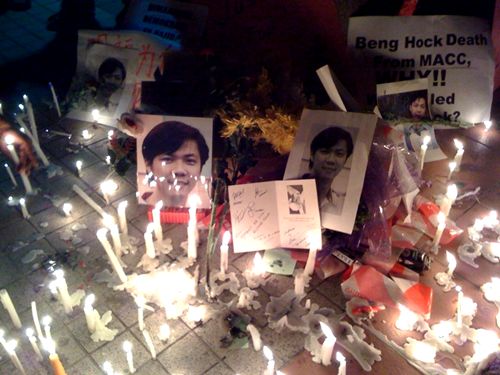 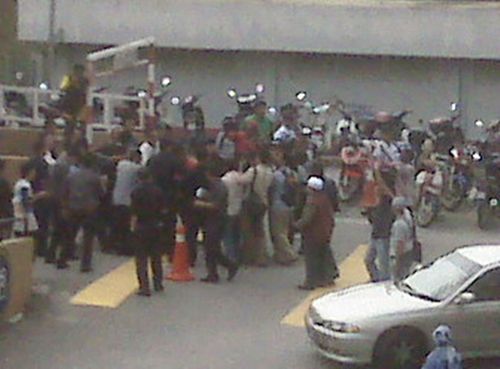 Protests and vigils have been held outside the Selangor and Penang offices of the MACC since the death of Teoh Beng Hock last night.

Last night, some 200 people turned up outside the Selangor office of the MACC for a vigil. This morning, about a hundred demonstrators showed up. Seven of the demonstrators were reportedly arrested including Kapar MP S Manikavasagam and Selangor state exco member Dr Xavier Jayakumar.

Over in Penang, some 30 DAP leaders and supporters clad in black, surrounded by a throng of journalists, gathered outside the MACC office for about 20 minutes after 11.00am.

The protesters expressed dissatifisfaction with the MACC and spoke out against what they felt was selective action against opposition reps, according to a contact at the scene.

A bouquet was placed at the entrance in memory of Teoh.

It is clear that many Malaysians are upset with this tragic turn of events.

Whatever PR initiatives and measures Najib has taken to try and boost the popularity of his administration appears to be unravelling in the light of what has happened.

The MACC appears to have been focusing on Selangor after its recent investigations in Perak yielded “success”. For all its claims of independence, in the eyes of many Malaysians – and perception is important – the commission appears to be selective in its investigations along partisan lines. That’s the message I keep hearing.

An independent inquiry must be held to get to the bottom of this tragic incident.

Anil, sorry I can’t vote because you do not appear to have included the follwing as an available option:

Because it is in effect a potent external power support tool employed to increase the staying power of many of the impotent pencil pricks and pathetic eunuchs now infesting a non-performing UMNO/BN to enable them to continue to unaccountably plunder and rape and sodomise the wealth and people of Malaysia without their consent.

hai guys, don’t be silly to fall into (alleged) BN plot to impose
martial law…. learn from the history of May 13 and wait for the timing…

I don’t think all those candle light vigil will impress uon Najib and goonies. They are just laughing their hearts out. DAP just cannot threaten
them this way, and the UMNO/BN goons knows it. They will continue with their persecution and so what? What can Pakatan Rakyat do? PR is only good at organising candle light vigils and talk, talk and mor talk only. Wasted my votes for them.

This damn … government stings! How nice if tomorrow is GE13 day…

Yup, civil strife is precisely what our dear leaders (appear to be) aiming for.

Why do you think they keep repeating on the radio:

Human life is more important then Political survival that MACC is all about……., u think we the rakyat are all that stupid.

MACC these are all B….. and are all BN UMNO Goons. This B….. don’t even belong there just like their D.G.

I agree with Buster Douglas. DAP don just waste time doing candlelight vigils & singing songs.U must build up yr guts & stand up against the ignorant regime of BN. Wake up DAP, one of yr guys have lost his life supporting u fellows who r enjoying life as CM,Deputy CM, MP’s,Senior Exco’s,Exco’s & Aduns. But there’s not much spark of protest from DAP? Especially from Penang i dont see much reaction.Maybe DAP in Penang r more busy with the developers. Lately DAP leaders in Penang r acting more like Umno. Demolishing hawker stalls and (allegedly) collabrate with BN goons…

I wonder if Merdeka Center will carry out a survey of Najib’s popularity now. This will be a good test of his 1Malaysia. I bet the result will be embarrassing.

Anil, maybe you should do an electronic survey.

Don’t let Teh Boon Hock die in vain. Only cowards like BN will never speak up. Well, Hindraf did through a measly press statement from the good old England. I challenge you Hindraf. Be at every function with the people. Be at every gathering before Sunday. Otherwise, you are just as crooked as BN.

MACC … YOUR INTERROGATE IS EVIL …
MACC U REALLY SUCKS…SUCK….SUCKS

I am deeply saddened by this utter discontempt for human rights and life.

This man’s life should not have been (lost), and the family should really not be there mourning now. There is just no word to describe how ridiculous the political scene in this country is becoming.

If an AntiCorruption agency can behave like (this), then what do we common folk have left?

It does not matter why he died. IT really does not. The bottom line is that THERE IS ONLY ONE WAY to change corruption, crime and judicial system and that is kicking out BN/UMNO out of office. ITS THE ONLY CHOICE. There is no other morally and logically. Simple as that..

The MACC investigation on PR was supported by BN politicians, and instigated by them. (Teoh’s death) blew up in their face. They are now scrambling for cover. The politicians, of course, had ran away. MACC who created the s*** is now left holding the pot of s***. Keep up the pressure. The balloon will burst.

On the comment of DAP’s attempt to hijack the issue and politicising. I say, dont let the young man die in vain. I dont think he want that. Let him by a martyr. Carry on his fight.

referring to your poll. i believe you left out one option: a blatant tool of barisan nasional to suppress opposition and oppress the rakyat.

There are more pictures of the protest in front of Penang MACC this morning here.

for 100 days, HE has planned how he going to deal with PR supporter, now, he unleashed his … to conquer and destroy the democratic we believe, to kill the rules of law, to change malaysia to HIS-1-malaysia, to instill fear among his enemy (PR), i feared we are entering into a 1black malaysia, may god save our country

Is this part of the ploy by Najib’s administration to create civil strife inorder to justify imposing emergency rule so as to avoid facing the people in elections?

Afterall, even manek urai has shown that even in gaining ground by BN they still lost..clear indication of the public’s outrage, disgust and anger with the BN administration.

Buster “Bloodvessel” Douglas – I perfectly understand your rage and the urge to translate it into violent reaction. That is precisely the excuse Najib needs to declare martial law. Sadly, it appears he has the backing of the royals as well as the police and the army. The only way out of the present moral morass is for the comfortable capitalist upper middle-class to get out of their “apolitical” cocoons and “point the bone” at Najib (in aboriginal communities when the elders decide to point the bone at somebody it means he or she is a social outcast and is… Read more »

Go read RPK’s piece – “The writing was already on the Wall” at Malaysia Today[ http://mt.m2day.org/2008/content/view/24426/84/ ]where he postulates on the cause of Teoh’s death. Compare with MACC’s bizarre explanation. Which sounds like the truth to you? Truth is simple and elegant because it has a ring of truth. It does not require improbable explanations which raise more questions like this one: Why would Teah hang around in a hated place after being released from interrogation with a marriage registration to attend hours away? Why was Teoh’s trousers ripped at the back? Which scenario could explain it – RPK’s or… Read more »

This is tragic and deeply upsetting. But the right response of all Malaysians is to mourn and then ensure an impartial and in-depth investigation is carried out. Unless the cause is established, everything we say is merely speculation.

However, DAP’s attempt to hijack the issue and politicising it only shows that they are more interested in benefitting from the poor man’s death than genuinely upset.

DAP, you should be ashamed of yourself. This is an affront to the deceased.

I have been following your work for a while and like your consistently even reporting.

Your online poll on the MACC however, needs one more option:

i totally agree with Buster Douglas, these stupid vigils are a waste of time. … Freedom comes at a price. But all PR is doing is talk talk talk and more useless talk! Some of you may disagree with me … think really hard, all this while has the peaceful and legal methods adopted by Malaysians really brought any change? The answer is NO. Time to change tactics people. Please don’t expect that by doing the same thing over and over again you will get different results.