Here are three burning questions that need to be answered:

1. Can the state justify its population projection for the three islands to reach 446,000 by 2030, as stated in the environmental impact assessment report? Where are these people coming from considering it took over 200 years for Penang Island to reach 700,000-plus?

2. Can the state explain how it will fund the PTMP projects, which will cost billions, when its expected net revenue from reclaiming half of Island A would probably be about RM600m in seven to 10 years’ time? This is equivalent to about one year of Penangs state’s revenue. However, the environmental damage and social losses would cost many times as much, if they are truly accounted for

How many foreign expats and retirees are gonna come to Penang. From 2010-2020, are there even 20k who actually buy property and stay here? By thinking logically, reclaiming three islands in the southern side of Penang will be nothing but a big failure.

You think the islands are 2 minutes instant noodles and can be eaten straight away. It takes few years to reclaim and more than 5 years for the islands to be stablised before roads and structures can be build. more than 15 years. not 2010 to 2020. Why not ask banks to do better giving higher interests? People thinks they can do better by property investments. Lands are limited and in fact land are shrinking eaten by the sea. You can do better if you do as what you said move to Kelantan. In Kelantan beach there used to be… Read more »

Since Salma Khoo is reluctant to appear on AnilNetto.com, readers can view and understand alternate views expressed here :

Personally, i feel Penang government after 2013 has prefered short cuts via collaboration with business communities. Look at the cilurrent state of Penang Road, Campbell Street and Komtar vicinities where small businesses cannot reinvent with success all these years. For this readon i have little faith in 3 reclaimed islands as they will further divide Penangites by income status with foreigners coming in.

Thanks for sharing, Ray.

They are old town – Wong Fei Hoong shop houses and $20 backpack losman. How many go there now? Who wants to go there in narrow roads and spent hours in the jams? Developers build a/c shopping malls and hypermarkets and hyper food courts with BIg McDonalds where parents can send their kids to play. The old town only ah peks and ah mas. Like Seberang, how often they want to travel to Pengland? They have ormost everything and likewise Tunlang only travels to mainland when he goes to belum or atas valley in his 4 wheels.

Penang wants to be like Dubai. Dubai have oil, Penang have DAP. 446k in the three island by 2030 is a biggest joke ever to put through! Do the state gov. honestly think the majority of Penangites will be able to afford the houses in the newly reclaim area?

milk tea, where did you get the information that pengland wanted to be like dubai? It is not only the biggest joke but mother of all blowing water? You are part of inner DAP member getting such information?

Do you know how big the three island is going to be? They are running low in money and they need it for the survival of their own party in Malaysia’s political landscape. Do you honestly think the state government is better than its predecessor? I cringe hard when they say “LGE developed Penang”.

teh susu, you orso knows they are running low in $$$? Many contacts in DAP inner circle? You Dap man? Like UMNO? Now no power no jalan sini dan sana? MCA best and Gilakan better not part of the team?
If islands not, you want 3 islands to be vey small …

The question remains – if two of the ferries can be converted for pleasure cruises, why can’t Transport Minister Wee Ka Siong save the Penang ferry service by allowing at least four of the iconic ferries to continue operating to transport vehicles and passengers?

Have WeeKS shown the public cost analysis of using traditional ferries over the new (sorry refurbished ones at new prices?) fleet of so-called speedboats?

Many locals take ferries out of travel neccessities and enjoy leisure cruise as added bonus.

Now the speedboat can be fast in 10 minutes a trip but at the expense of the joy of sea breeze WeeKS csn never apprrciaye because he can afford luxury cruises elsewhere most locals cannot.

Follow Malaysian Football Naturalisation program, Penang can grant residentship to foreigners when they buy the new condos on the 3 reclaimed island.

GAMUDA and Ideal Properties can pump in the cash in exhange for the land to build commercial and exclusive residential properties.

Inflation. 5kg cooking oil was RM16 5 years ago now RM32.
So inflation is the reason when economy stagnates.

(4) Does the gomen think the new islands are safe – kebal – from climate change including typhoons and rising sea level?
(5) Does this project reduce or increase the GHG pollution of the country?

Not safe but have done many even much bigger around Malacca, Johor, Lang kawin and even Kedah wants to join in the race and part of the group.

Look China, reclaim a few island around S.C. Seas and survive the monsoons

Any rebuttal from PG forumers ? Honestly speaking only developed first world nations will her people voice out against ecological/environmental damage. Not the case here where especially during this pandemic people barely managed to put food on the table(doubt the majority of PGtites even knew of this project existence). As LKY used to say, hard truths. 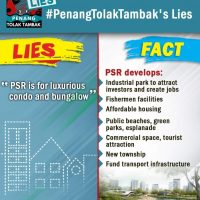 This is what EC is saying about palm Oil. But we are living in the well not knowing jungles and forests are cleared in unfriendly and green way. Yet when we see green palms, everything is green and fine but no one dares to talk about biodiversity otherwise will be eating curries

GEORGE TOWN, June 15 — The Penang South Islands (PSI) project, also known as the Penang South Reclamation (PSR) project, has been a hot-button issue in recent weeks with everybody — both sides of the political divide, civil society and neighbourhood uncles and aunties — weighing in.

Probably “Penang My Second Home” could be the answers to the questions. Foreign rich migrants to finance their stay in the (new) island(s)?

Foreign retirees can stretch their savings in their twilight years living in Penang as 2nd home or retired home.

Foreigners are not rich. If rich, who wants to come to Pengland? LOS is many times better. They can AGO AGO every night. Those buying are only middle class and can afford, In HK and China, small apartments cost a few millions. If convert into Malaysia dollars, it is still millions of Malaysia dollars. Our monetary value is very low and our earnings are orso very low. Now LOS baht bullock cart wheel is mich bigger than ours. Many Pengland kias sell hokkien mee in Sing apor gets say Sing 1.5k which is 4.5k rinngit.and if he save 1.5k per… Read more »