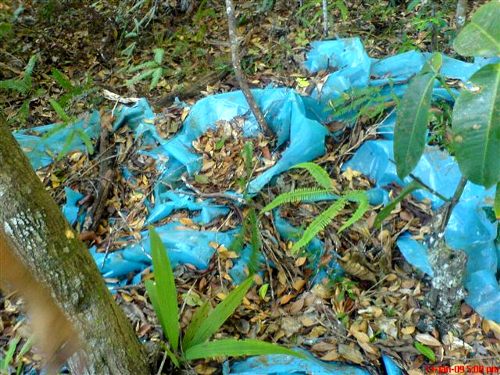 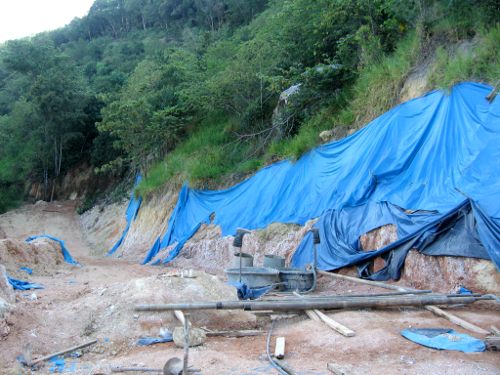 Residents of Chee Seng Gardens in Tanjung Bunga, Penang, are now worried about an outbreak of dengue fever.

On 11 January, 10 Chee Seng Garden residents visited the area around the construction site and found what they said was “rampant irresponsible disposal of plastic sheets and other recepticles in jungle fringes, ….uncovered hill slopes which should be covered, proximity of land clearing activities to PBA Land, blasting near to Straits Regency, hill gradient at near 90 degrees when terraced…”

They are worried about a possible outbreak of dengue fever and point ot the following to show their fears are not without any basis:

In addition, the residents have complained of incessant drilling and loud blasting and claim that the hill-slopes being terraced are way above the maximum limit of 35 degrees.

The residents want a stop work order so that the developer can cf lean up the entire area and ensure that the hill slopes are effectively covered. They also want the blasting to stop and other measure taken to remove boulders and rocks.

So far, they have been disappointed by the various authorities’ lack of an adequate response and are growing increasingly impatient.

Seventeen+ cases of dengue in the last few weeks definitely warrants attention. Putting private economic interests ahead of community health and indiviudal lives would, in my opinion, be going overboard. Yes, mosquitos breed in natural surroundings but the dengue mosquito tends to breed in urban areas near human habitats. The site needs to be cleaned up to avoid future cases. Checking out other development sites and public areas, in addition to the routine private checking that occur would be a proactive approach that would appear favourable to public interests. An outbreak of dengue would clearly impact the economy and outside… Read more »

construction sites are practically almost the same throughout the nation, and dengue is not only in chee seng garden.Just don’t go overboard, at least the project can assist in the economic sense during this trying times

Why so alarm? In hydrology and runoff, the natural vegation helps to retain the runoff and prevent flooding downstream. If the natural vegetation (small natural depressions) holds the water, naturally, moquitoes will breed in the holding water and yet no one complains. In the new DID requirements, any new development must ensure that there is no excess runoff and they must be detain in a tank and slowly release. Why no complains to DID about how mosquitoes will breed in the detention tank?

True, dengue threat is real. I hiked up the steep wall above Chee Seng a few times in the last 2 years. The striped mosquitoes were attacking us high up the slope on hot and relatively dry afternoons. Such mosquito activity took place higher than I would expect of such a windy and steep slope. I noticed boot-size ponds made of dented plastic sheets, on dry stretch of days. In fact, one of the earliest weeds/plants planted high up on the slope was apparently a strain of rice !! I was surprised to see many fruiting rice plants more than… Read more »

The state government should look into this matter seriously and carefully. We may not want deaths by dengue in Chee Seng area. But as what you mentioned Anil, the CM is also considering business-people in terms of the state economy. Thus he should find a win-win situation. And to me, at this moment, i myself am still analysing what can be a win-win situation but maybe the CM should meet the people and the developer and have deep consultations with them before making a decision.

YAB Lim’s government should heed to the voices of those affected. If those in authority would put their own dwellings in the place of the agrieved, they would be more sympathetic and proactive.

Penangites have high expectations of this DAP led government.

Backlash can be severe if the state government doesn’t walk their talk.

Where is this Chee Seng gardens?

Thanks, I have added the info in the post now… it’s in Tanjung Bunga, Penang.. – Anil

Don’t look so far, if the government themselves are not that bothered, close one eye attitude, what do you expect from the rakyat/ people themselves?