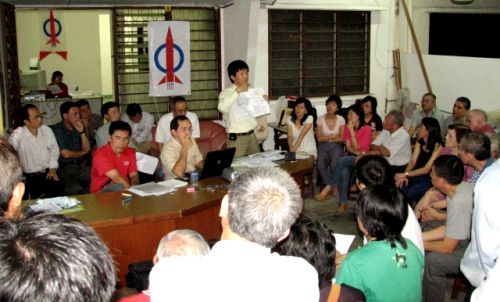 A small victory for People Power

Some positive news from Chee Seng Garden in Tanjung Bunga, Penang, after the ‘miraculous’ flooding on hill-slopes (caused by hill-slope apartment/condo projects). The MPPP has said there will be no more projects on steep hillslopes. It’s a small victory of sorts for People Power over irresponsible developers.

A resident George Aeria sends us an update:

Since the floods on 6 September, we met up with the MPPP Engineering Dept directors and the developers on the 10th, but their response was pathetic. Thus, we, the residents, pushed for a meeting with the MPPP YDP and we finally got it on 20 September.

This meeting was a surprise to us as he acted as the role of residents’ champion and instructed all parties – both the developers, his MPPP Dept directors and all other government departments – to act responsibly and to resolve all issues at the housing estate. He even stated in the meeting that he would NOT approve any more hillslope developments above Class 4 slopes i.e. > 35 degrees.

… I guess the challenge now is to see if ACTIONS match the words. All I can say in the meantime is that the new DAP government has really been good to get such a response from the MPPP. Under the Gerakan – I know as I had another issue with them in 2002 – Gerakan MPs and Adun did not help me out the way Teh (Adun for Tanjung Bunga) and Liew Chin Tong (MP for Bukit Bendera) did (in arranging) both meetings.

So let us just wait and see if the developers do whatever rectification as promised and wait for the rains to see if it is resolved. Thereafter we have to measure the YDP’s words with his forthcoming actions. SHOULD they approve anymore NEW hillslope development, then they are rubbish – CAKAP tak serupa BIKIN. 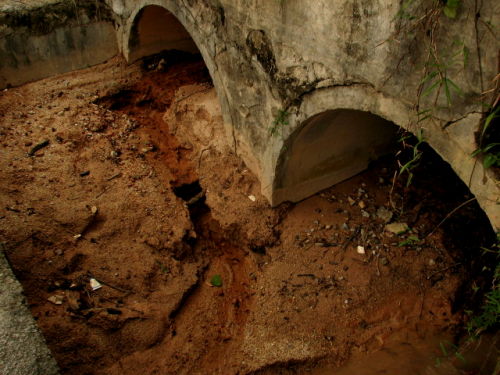 Meanwhile, the MPPP has slapped both developers with stop work orders. These orders can only be lifted if the developers comply with requirements imposed by the MPPP. The developers will have to, and I quote from the minutes of the meeting:

Residents will be monitoring closely to see if the developers comply with these requirements before the stop work orders are lifted. 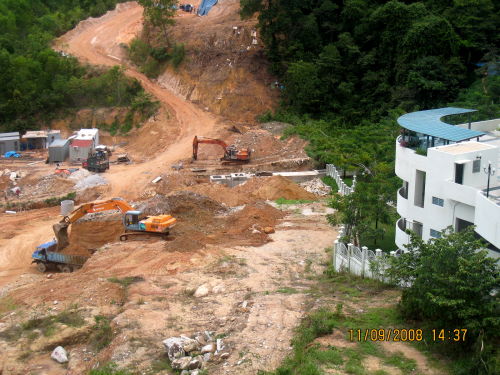 Not just the MPPP, but the residents too will be closely monitoring…

At the meeting – to allay fears of residents – it was also agreed that any rock-blasting would have to be done by the book/guidelines and MUST also be overseen by the Geo-science Dept; otherwise, no blasting is to be undertaken.

Meanwhile, Tanjung Bunga Residents Association represetatives highlighted their concern over hill development in Penang that went well beyond the Environment Ministry rulings in 2002 which restricted development in Class 4 hillslopes (> 35º).

To this, the YDP stated that he has instructed his department officers to ensure there will be no more development on hillslopes that exceed a 35-degree gradient.

So, are they going to stop that particular project or does it apply only to new projects? I think our Government should stop that project and other similar projects immediately before it is too late.

We must learn to love our land and environment. Otherwise, we and our children will suffer the consequences of the destruction we failed to stop.

Han2 wants existing projects to be stopped as well:

I hope they not only stop approving new projects but get rid of the ongoing ones. It is really scary driving pass these projects during the rainy season on a daily basis to and from work.

We are in 2010 now, so sad to see so many projects going on, I feel the impact already. Within 5-10 years Penang will be not a good place to live anymore. I’m selling now before it hits this beautiful Island.

We, the residents of Chee Seng Gardens, who started the fight to get the Stop Work order in Sep 2008 are now pushing for the project (BOlton Surin) to be stopped altogether as the hill slope is really very steep (above 60 degrees and maybe more) . The recent Bukit Antarabangsa tragedy have shown us that no hill can be developed and a slope so steep be made to just stay steep without falling down some time in the future. This is made worse by the fact that Malaysia has a VERY lousy history of Slope Maintenance, or rather, no… Read more »

If PR government has reason to believe some of the on going projects and new projects can endanger the life of home buyers, then they should be stop until further notice , to protect the life of citizens is one of the most important responsibility of this new state government since BN has failed miserably in carrying out with their solemn duty to all Malaysians.

I think the project should stop but to be realistic, if the current Gov stops it who will pay the penality for stopping this project?

The previous gov had approved yet expecting the current “good gov” that we voted to bear the consequences..

How smart. I recon there should be a bill passed that who ever responsibile for such action will have to take out any lost if found endangering the benefit of Malaysian citizen

Congratulations on the efforts of all those involved to get the GREEDY IRRESPONSIBLE DEVELOPERS to at least clean up some of their mess and damage. We (believe) that (certain) MPPP inspectors and officials responsible for ensuring safety are (allegedly in the pocket of) THE DEVELOPERS. (So are they closing) one eye while these crazy projects spoil Malaysia for good, flood our streets, spoil the sea, etc? Yes, they make big talk when the cameras and reporters are around, and then go back to their office to approve more ridiculous, low quality, unneeded projects… They should all be thrown in jail,… Read more »

True, existing or already-approved projects will still pose major problems. One problem is the lack of sense or coordination as a community in Tanjong Bungah. Because of the hill and bay geography (and probably lack of parking space for car-reliant residents to meet), TB residents tend to be dissected into separate small, weak, groups, with fragmented information. For example, * rock blasting at Mount Pleasure does not evoke response from people at Hill Side. * Stilted development proposal behind Mt Erskine (Pearl Hill) gets less response from people at Chee Seng Garden, * Chee Seng flood is not seen at… Read more »

It will be difficult to stop existing projects approved earlier by the BN government without the threat of long drawn litigation in court which may most likely result in the PR government having to pay millions in compensation to the developers.

We need the PR government to push through a law which will make it mandatory for the approving bodies to publicly display all pending development projects on the internet for public scrutiny and debate for a certain period before they are considered for approval.

I am glad that the present state government is making an effort to do the right thing about hill-slope projects. Some years ago a developer attempted to build apartments on the hill slope off Mt Erskine Road in Penang. The hill was cut but the project was abandoned after a while. The residents who were living in that area complained to the state government and asked that the project to be stopped but nothing was done. Sadly, the beautiful hill was destroyed and today there is no more vegetation – all we see is the hard rocky surface of the… Read more »

I am happy that the PR/Dap Government is responding to our need in Penang, if they keep up their work they should be holding on to the Penang state Government for a very long time.

The current YDP is one of the best Penang ever had in a long time. I have raised several issues directly to him in the past and he personally replied my emails and even called me on the phone after office hours to check. I have full respect for him. Thank you Datuk Zainal for the good job! Hope you don’t get transfered out after 2 years.

This is a good move..

I drive past there almost everyday, even thou’ I dont stay there and during the recent rainy season, the amount of erosion shows that indeed this is a tragedy-waiting-to-happen. Besides there are already too many hi rises on that hill.

I hope they not only stop approving new projects but get rid of the ongoing ones. It is really scary driving pass these projects during the rainy season on a daily basis to and from from work.

Well, if DAP/Pakatan state government handle this issue, I think they will GE 13 anytime. Might have forgotten about the FAP issue brought up one blogger in which the whole leadership is judged negatively.

All Penangite should be proud because they voted in Pakatan… under Gerakan or UMNO/BN this kind of people winnings will never happen.

Again it proves that voting for Pakatan, especially DAP is the best choice for Malaysia ever to go forward and become a trully liberal, democratic and advance country.

hi Anil, thks for report. i appreciate your work.

One small step , one BIG victory for Penang !
So Penangites any regret in the change ?
Onwards Penang , Onwards Malaysia !

So, are they going to stop that particular project or does it apply on to new projects? I think our Government should stop that project and other similar projects immediately before it is too late.

We must learn to love our land and environment. Otherwise, we and our children will suffer the consequences of the destruction we failed to stop.

Congrats to the YDP of MPPP, the Tg Bungah Residents’s Association and the elected reps YB Liew and YB Teh on the positive response,with an even more positive decision not to approve any more hillslope development of more than 35 degrees gradient.

Thanks to all NGOs and individuals who have tirelessly monitored development that is not environmentally-friendly. I’m confident that all parties would always be vigilant and keep Penangites informed!

Thanks Anil for updating developments in the State.