The termination of MMC-Gamuda as the contractor for the RM17bn underground portion of the MRT2 project in KL highlights a fundamental flaw in the project delivery partner (PDP) model, which is also being used in Penang.

And that flaw is having a consultant, the project delivery partner, earning 6% in project fees and later possibly being involved directly as contractor for the various infrastructure projects or indirectly in other ways. This is tantamount to a conflict of interest, especially in the case of Penang.

The original transport consultant in Penang was Halcrow, which was paid just RM3m to come up with a transport masterplan for the state. Halcrow came up with a plan for a RM27bn transport network. 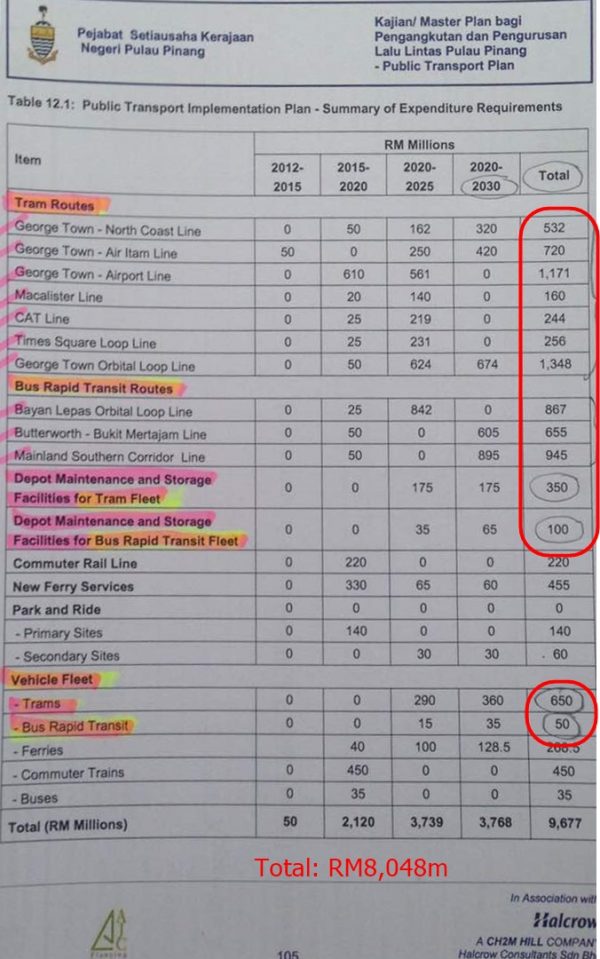 The Halcrow plan comprised RM10bn for public transport (including RM8bn for bus rapid transit and trams) and the balance RM16-17bn for highways (including the controversial RM6bn undersea tunnel-and-three highways that the state government wanted).

Now, SRS supporters say this Halcrow plan was “just a conceptual plan”. Yes, of course it was – hey, what do we expect for RM3m? But the Halcrow masterplan did lay the blueprint for a sustainable mobility framework.

Next, the state government came up with a ‘request for proposals’ for a so-called project delivery partner to implement the Halcrow masterplan. I wonder where they got the PDP idea from, eh? I have a good guess.

In the end, they selected SRS Consortium (comprising Gamuda Bhd 60% and two Penang-based property developers, Loy Phoy Yen Sdn Bhd and Ideal Property Sdn Bhd). If you ask, why are property developers in the consortium, I would say that is a good question. No one has given me a satisfactory answer. Similarly, if you ask what does a transport infrastructure contractor know about sustainable mobility planning….

Under SRS Consortium, the cost ballooned to RM46bn as the consortium came up with a more exorbitant proposal than the Halcrow masterplan – and radically different:

Instead of the more cost-efficient BRT and trams (which include segregated and elevated sections) that Halcrow had proposed, SRS came up with a rojak of more expensive elevated LRT, outdated monorail systems, cable car systems and whatnot.

And for good measure, it threw in the highly controversial 19.5km six-lane Pan Island Link, which was not even in the Halcrow plan. This highway alone will cost RM8bn – the same as Halcrow’s entire public transport budget for the whole state.

The Pan Island Link highway – half the length would be made up of tunnels – would link the 900-acre land reclamation off Gurney Drive in the north of Penang Island with the 4,500-acre three-island reclamation off the southern coast near the Penang airport. Not surprisingly, many see the highway as facilitating high-end property development with “sea view” condos on artificial islands in both these areas. A property play, as they say.

But SRS Consortium didn’t count on the property market overhang, which has thrown a cangkul in the works. Hence, the Penang government is now seeking a RM1bn loan from the federal government, ostensibly so that it can build both the elevated LRT and the Pan Island Link simultaneously. But it has also mentioned that if it doesn’t get the loan, the PIL could be delayed to 2027, ie after the LRT is completed. My guess is that the state would find it hard to sell reclaimed land on two islands simultaneously (as they had originally planned under Phase 1) given the high-end property glut; so now they are mulling creating just one island under Phase 1 to finance the elevated RM8bn LRT for a start.

At the Penang Transport Council, the issue of a conflict of interest inherent in the PDP model was highlighted on many occasions – but it mostly fell on deaf ears or was largely ignored.

After all, the higher the value of the work proposed, the more the PDP fees. And what if the type of work proposed (eg lots of expensive tunnels) oh, just so happens to fall within the area of expertise of one of the parties in SRS Consortium, the project consultants? Would the consultants then go on to participate in the actual construction work either directly as contractor or indirectly? At the transport council meetings I attended, they said no, but…

Even Gamuda founder Koon Yew Yin expressed concern. So too Penang Forum. Tony Pua pointed to the inherent problems of the PDP model in the Klang Valley. An international banker wrote that the PDP model was unsuitable for a large, multi-generational project such as the one in Penang.

For that matter, experienced transport planners point out you don’t plan so far ahead when so many things may change, like technology, even the population (the present total fertility rate in Penang is well below population replacement level). Planning for 15-20 years, yes… but 50 years?

This is why Penang Forum called for the SRS Consortium’s transport proposal to be reviewed by independent globally renowned experts in sustainable mobility.

This is why 17,000 Penangites have signed an online petition asking for the Pan Island Link to be scrapped and the SRS proposal to be reviewed. And why not? They don’t want an exorbitant but short-sighted contractor-developer-driven proposal.

And now, after what happened with the MRT2 project in the Klang Valley, even more serious questions will be asked about the appropriateness of the PDP model in Penang and the SRS proposal.

Why there is no Project Delivery Partners for community projects in Penang ?

Why no partner for a library, eg Ideal or Ivory contribute vacant property as library site ???

How big and complex are community projects? Even pg forum and tung lang talk so giganto they do not want to stand for election. You think big highways and tunnels very chip chip? Many state goments and even HK gomen and MRT has problems and issues dealing with the project even though they have many experience in managing the projects. Budget over run and delays. In pg, can you gave some names of those have experience in managing projects? If Ideal or Ivory do not want to be the partner for the library, how about you? You can be the… Read more »

Just relocate that underutilised library at Komtar to Bayan Baru to serve the needy residents.

Don’t make a big deal because cancellation is due to country no money. Please don’t anyhow spin.

The government needs to find other sources of funds to pay its debt, including imposing new taxes and selling some of its assets, says PM Tun Dr Mahathir.

“That is one of the ways for the government to raise money but we haven’t decided on any new tax,” he said at the “Malaysia: A New Dawn Investors’ Conference” here on Tuesday.

The new Tourism Ministry is sleeping still after 5 months?

30% drop in the arrival of PRC Chinese tourists yet that Tourism Minister cannot think out of the box and can only suggest staggered school holiday to avoid congestion at local places of interest? Cuti-cuti Malaysia for local tourists cannot bring money with mere domestic consumption, instead should go all the way to attract high spending foreign tourists especially those from China. Faham tak?

If Gamuda-MMC is so confident of their pricing as they seem to imply, they can participate in the international retender. They also have the significant advantage of knowing more about the site conditions compared to other tenderers because they have already done about 40% of the work, which in turn will lead to more accurate costings. Heck, they may even get awarded the tender at a HIGHER price than what they offered the govt, yet still be the lowest priced tender. And their 20,000 staff, including the 26 year old first class engineer can continue to get employed. So, why… Read more »

I am not a KL resident, so go ahead to cancel this MRT project. Anybody nowadays can get retrench, no need sympathy for the affected workers. LGE must be form in the interest of our nation. Retrenchment is a new normal, get use to it.

Do more for the people, less for highways. Read: Nigeria, Singapore and India fuel wealth gap – Oxfam https://www.malaysiakini.com/news/446502 Nigeria, Singapore and India are among countries fuelling the gap between the super-rich and poor, aid agency Oxfam said today as it launched an index spotlighting those nations doing least to bridge the divide. South Korea, Georgia and Indonesia were among countries praised for trying to reduce inequality, through policies on social spending, tax and labour rights. Oxfam said inequality had reached crisis levels, with the richest one percent of the global population nabbing four-fifths of the wealth created between mid-2016… Read more »

Should India be sending a rocket to Mars when 40% of children are malnourished?

The wage gape is not going opposite direction, the poor now is so much better than 20-30 years before. It’s just increasing at a slower rate compare to the rich. What you are saying somehow tells me that you like socialism.

The fact is inflation is eating away purchasing power of the M40, what’s left for the B40??? And do you know the rich & super rich controls most big corporations like Big Pharma monopolising + manipulation price mechanism eating away affordability for both M40 + B40??? Don’t you think this is not palatable instead of just vomiting socialism??? The reality is the world get … by the excess greed of materialism + for money no wonder ‘Cash Is King’ was & is still worshipped by our ex-PM to the extend of almost destroying this Tanah Air Kinta Ku. So, now… Read more »

B40 likely be affected badly by technological disruptor since they are mostly low skilled and never think of upgrading themselves.

Inflation is everywhere except in belum. Why don’t go there and solve your problem

Malaysia is better off than Singapore in wealth gap, because our B40 can own and drive personal cars, unlike those poor Singaporeans taking SBS buses and MRT.

PDP modal in Malaysia is a jokes!

No but ah pek has been there? So been to drinking hole? No vodka and had to go for toddy? Buy Malaysia and support local.

Yet again, they want a massive development on Swettenham Pier Cruise Terminal (SPCT). Never mind about our fishmen’s livelihood !

GEORGE TOWN: After more than a year’s delay, the RM155mil expansion of the Swettenham Pier Cruise Terminal (SPCT) is set to begin early next year.
Upon completion, the joint venture project between Penang Port Sdn Bhd (60%) and Royal Caribbean Cruises Ltd (40%) would be able to handle 1.7 million passengers a year by 2021.

The fishermen are forced to venture further out, sometimes putting their lives at risk due to unpredictable sea conditions, or when they trespass into Indonesian or Singaporean waters.

Saying, grass is greener over the fence. Good hunting is always in new hunting ground. Otherwise pg will not have khoo and chua kongsi

Who fish in Swettenham pier? You want to eat contaminated fish near the ferry terminal and port nearby?

We all know you eat imported fish! Keep it up!

We know ah pek has been eating fishes from swettenhem pier and the port.

Ah pek been feeding on fishes from swettenham pier and around the port?? Moh tuck thing??