It is not just in Malaysia that people are concerned about 1MDB. Apparently, certain parties in the Middle-East are getting a bit jittery. This was the lead in the Business section of the Gulf Times on 15 January 2015. 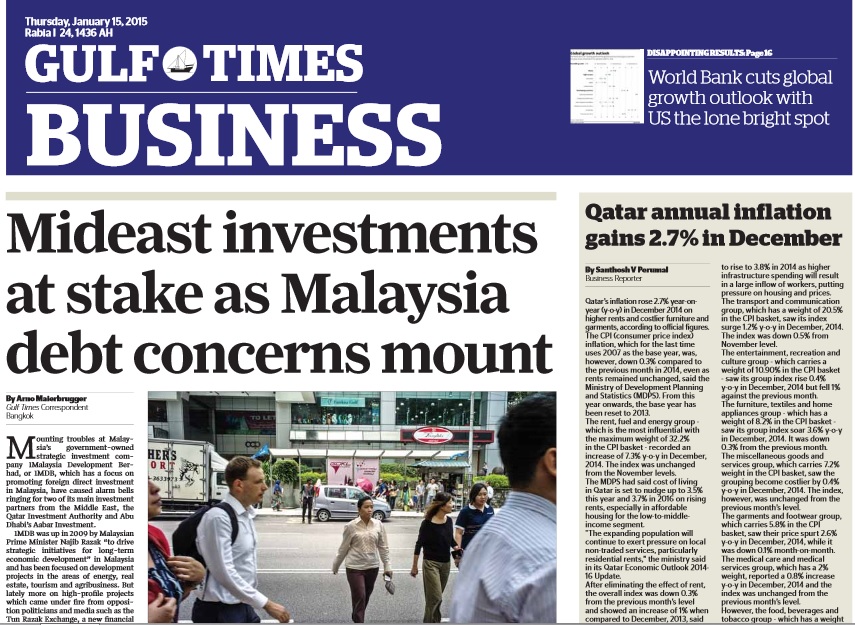 This is what happens when governments set up companies to dabble in business on behalf of the people with little transparency or accountability in Parliament.

The full report from the Gulf Times is reproduced below:

Mounting troubles at Malaysia’s government-owned strategic investment company 1Malaysia Development Berhad, or 1MDB, which has a focus on promoting foreign direct investment in Malaysia, have caused alarm bells ringing for two of its main investment partners from the Middle East, the Qatar Investment Authority and Abu Dhabi’s Aabar Investment.

1MDB was up in 2009 by Malaysian Prime Minister Najib Razak “to drive strategic initiatives for long-term economic development” in Malaysia and has been focused on development projects in the areas of energy, real estate, tourism and agribusiness. But lately more on high-profile projects which came under fire from opposition politicians and media such as the Tun Razak Exchange, a new financial district in Kuala Lumpur named after Najib Razak’s father and partly funded by Aabar, and the 200-hectare Bandar Malaysia project, an integrated urban development also in Kuala Lumpur, of which one of the partners is the QIA. The value of Middle Eastern investment in these two projects alone is $8bn: Qatar has pledged $5bn for Bandar Malaysia, and Aabar has raised $3bn through its 50:50 joint-venture with 1MDB called Abu Dhabi Malaysia Investment Company.

However, both projects are way behind schedule, and the Middle East partners have reportedly become displeased with the lack of transparency in sharing 1MDB’s plans and strategies with investors, as well as with delays that are causing financing costs to rise. According to sources quoted by various Malaysian newspapers, both Qatar and Abu Dhabi are considering to step back from the projects, as is an Islamic bank from Kuwait, reportedly Kuwait Finance House, and US-based Insurance company Prudential.

Things became worse for 1MDB when the fund missed a loan-repayment of $563mn due end-December 2014 to Malaysian Banks Maybank and RHB, causing concerns that the fund might have trouble to manage its total borrowings of $11.8bn. 1MDB also had to repeatedly delay the planned initial public offering of its power plant unit which was expected to reduce the fund’s debt burden. However, a longer-than-expected due diligence process and debt refinancing negotiations lead to another delay.

Early January, Mohd Hazem Abdul Rahman, 1MDB’s managing director and chief executive officer, stepped down after less than two years in the position. He has been under fire for the huge debts the fund accumulated, as well as for certain investment decisions and high fees for consultants. Rahman was replaced by Abu Dhabi-based Malaysian investment banker Arul Kanda, formerly executive vice president and head of investment banking at Abu Dhabi Commercial Bank.

It is quite obvious that the decision to replace the CEO with an experienced Abu Dhabi banker was driven by 1MDB’s strategic partners in the Gulf after rumours of a possible default of 1MDB started spreading.

“It would upset lot of people including Malaysia’s strategic partners in the Middle East if a default happens,” the Malaysian Insider newspaper quoted a Singapore banking source as saying.

Critics argue that the debt-ridden investment fund has become a “threat” to Malaysia’s entire financial system where 45% of sovereign debt is being held by foreign creditors, mainly in sukuk and other Islamic financial instruments.

Foreign investors also have started to worry about the sovereign credit rating of the country which is currently A3/A- but could possibly drop to the level of Thailand’s Baa1/BBB+ in case of continued refinancing problems of 1MDB or even a necessary bailout by the government. This would be a huge embarrassment for Malaysia’s prime minister who is also chairman of 1MDB’s board of advisers.

Bloomberg has reported that 1MDB is planning to seek another one-month extension” on its RM2 billion loan “to give it more time to sell a stake in its energy unit”.

We are curious why 1MDB could not repay the RM2 billion loan with the proceeds of the US$1.1 billion (RM3.9 billion) fund from its Cayman Islands investment?

The inability to resolve the meagre amount relative to its RM42 billion debt is an indication that 1MDB is in serious financial trouble?

Is Ananda Krishnan bargaining hard with Arul Kanda for lower price to acquire a stake in a 1MDB’s energy unit?

Bank Negara has not yet confirmed that 1MDB has yet to get the fund back from Cayman Island despite repeated questioning from the opposition.

Ananda is now said to be lending RM2 billion to 1MDB to service its overdue debt.

Ananda has (allegedly) screwed 1MDB, selling asset to 1MDB at high price and buying back at low price. Perhaps others also benefited from such transaction?

Now what have we to say about this. I believed some will say the people of this INTERNATIONAL audit firm are (up to the mark) or the govt must have some insider dealing or maybe NST must have make up a good story for 1MDB or too obsessed with Pua and Rafiz figure.

PAC chairman says since an international audit firm has already given 1MDB the thumbs up, PAC has no basis to investigate the company further.

This is the result of when we have a joker helming the country, sure koyak !!!

In that case, i think it would be wise not to put your hard earned monies in the above 2 banks, goyang-goyang…

Vote la beramai ramai 1mdb, you and your family will be saved/safe !!!

I believed your retarded brother knows that banks in Malaysia including the above 2 are PIAM protected. Don`t you know that !!

Najib is asking rakyat to shop more so that BN can derive more GST revenue?

The Singapore dollar rose against the Malaysian ringgit on Tuesday (Jan 20), briefly crossing the psychological 2.70 ringgit level as Prime Minister Najib Razak cut the country’s 2015 economic growth forecast and said the fiscal deficit will be larger than previously estimated. The Singapore dollar traded around 2.6827 ringgit at the end of the Asian trading day, up from 2.6773 early in the session, according to Bloomberg data. The level is the highest since 1981 when the data became available on the system. Reuters data showed the Singapore dollar hit an intraday high of 2.7019 around 5 pm. The ringgit… Read more »

So Malaysian Couples (many Penangites) can easily sell off their Spore flats upon retirement to settle at Straits Quay high end condos.

Those Penangites who have been working and staying in Singapore should be able to afford those expensive condominiums on Penang island with their Singapore Dollar. So those who are staying put in Penang since Gerakan days are now complaining as they do not like to be advised to buy properties in SP with their Ringgit.

What is your opinion on the revised budget based on $55/barrel of oil?

The current account surplus narrowed by almost a third to RM7.6 billion between the first and third quarter of 2014, and the prospects of a deficit are looming as oil and gas export earnings fall. Malaysia already is a net importer of foreign capital. Its households are bursting at the seams with debt.

The $102 billion (RM363 billion) of short-term borrowings Malaysia has to pay back to the world, was barely covered by the $116 billion (RM413 billion) of foreign exchange reserves held at the end of 2014.

US & Western countries would always paint a bad picture of Asia especially China and Russia and those that do not toe their line. Qatar also has one of the biggest investment failure not too long ago. Compared 1MDB to it, its very small. While 1MDB is in a solvency state that Qatar investment is a total failure. So we do not have to believe so much of these cock and bull stories from these foreign correspondents.

Yang should not believe too much what he read in NST.