A businessman from Muar has insisted he despatched mangosteens to China on board the ill-fated flight MH370 on 8 March 2014.

Sounding agitated, Poh said this was not the first time he had sent such shipments. “I also made similar despatches on 6 and 7 March” as well as a day or two after the incident. “You can check the customs documents for those dates.”

A question on many people’s minds was put to him: how was it possible to find so many mangosteens in the off-season?

“You ada duit? (You have money?)” he asked. “If you have, I can source mangosteens for you.”

But where did he source those 4.5 tonnes, especially as Johor Fama had stated that that quantity of mangosteens could not have come from the state?

“A little from what I planted (saya tanam) in Muar, the rest from elsewere.”

Elsewhere? From Indonesia, Thailand or Malaysia?

“Outside Johor, within Malaysia,” he replied, without wanting to be specific when asked for a more precise location. “I have my sources.”

Poh complained bitterly that he had no peace since the MH370 incident. Reporters had been snooping around in his neighbourhood, he said. “Instead of asking me, they were asking my neighbours all sorts of things.”

He declined to discuss the nature of the company he is involved in or his other plantation interests. “Let’s stick to mangosteens. Don’t talk about anything else.”

I had plenty of other questions to ask him, but I felt he was not prepared to disclose more or might not know the answers. Questions like: How were the mangosteens transported to KLIA? Where was it stored in KLIA? Was that batch of mangosteens actually put on board the plane? Who checks that the cargo is intact before it is loaded onto the plane? How thoroughly is the cargo inspected?

The following document was part of the cargo manifest released by the government on 1 May 2014: 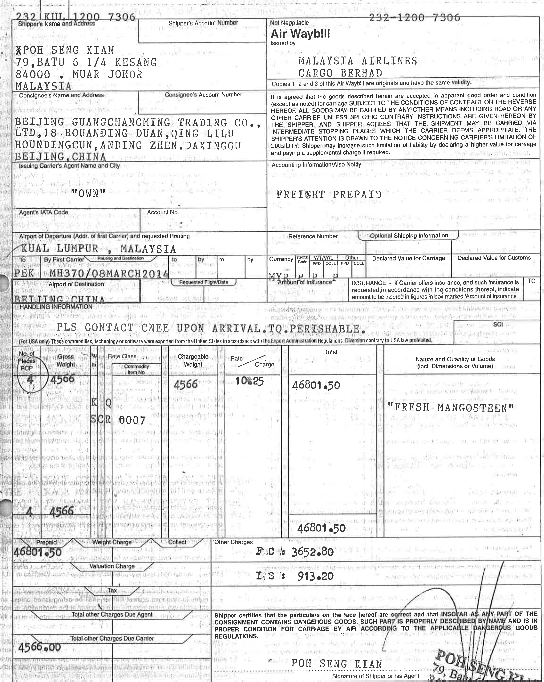 Interestingly enough, on 30 April 2014, a day before the government released its preliminary report on MH370, a Facebook user by the name of Seng Kian Poh (who had started his Facebook profile in April 2012) changed his profile photo to one depicting mangosteens (below). 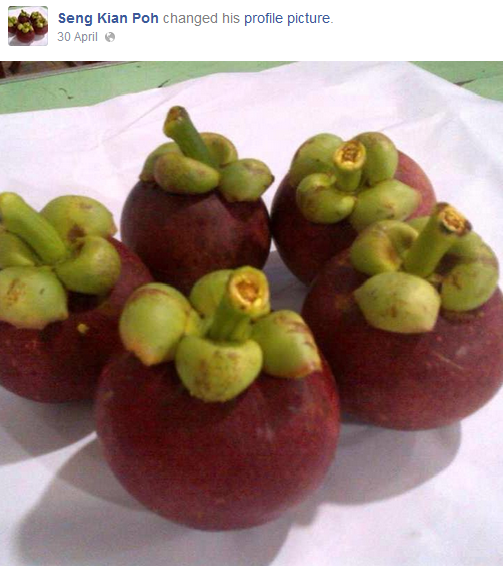 Tun Mahathir Mohamad has claimed in his blog that CIA is a possible suspect as US could have hijacked the plane with the help of Boeing technology via remote control. The same way the US twin-tower were attacked in 911?

911 & MH370 both unwittingly share the same circumstantial evidences of secret government involvement on the very days of infamies: 1) no military jets were scrambled to the air space to intercept during the 1st hour of terrorism or no contact. Both identical responses were highly suspicious of delay tactics for the fulfilment of evil by proxies (such as Osama bin Laden). 2) military exercises of air force, navy & army in US & Cobra Gold & Cope Tiger in Thailand. SiSi-IA & Global Cop have been in this ‘dirty’ covert business for a long, long time – to gain… Read more »

Hishammuddin was quoted on the Four Corners programme recently:
“If you’re not going to shoot it down, what’s the point of sending it (a fighter) up?”

I thought the primary purpose of the ‘interception’ is to investigate and thereafter, if found wanting, to warn and confront. Shooting down should always be the last resort

Such careless remark by Hishammuddin shows incompetence as a Defence Minister?

Yes, what a disingenuous remark.

MAS is to undergo restructuring, that could include the partial sale of its engineering unit and an upgrade of its ageing fleet. But will there be lay-off of some of its 20,000 employees?

Struggling Australian airline Qantas will make dozens of pilots redundant for the first time in 40 years, reports said Wednesday, as it looks to slash costs to contain massive losses.

MAS is cutting costs in a heartless way so much so that the caregivers are no longer given to the families of the crew on board the lost MH370 crew?

Mangosteen came from Sarawak probably. But how was it shipped to KLIA? Why wasn’t it shipped directly from Kuching International airport to China? hmmm…..

Has the mangoesteens businessman got any connection in Putrajaya ?

That Poh guy said if you ada duit i can source mangoesteens for you!!!

He can source tons of mangoesteens out of season and put on the fateful flight, everything can be kautim if ada duit, human lives can be compromised in this kk land… and the kk n 1 ringgit chicken pm with his good cousin and gang will do all the (alleged) cover ups for you. Remember, you garu my back and i garu yours, i syiok you pun syiok…

Continue to vote la for this satu ringgit chicken land all the bodoh bodoh !!!

If you got money the CAT can also let you and developers sell low cost unit at higher price and direct to the buyer without referring to the list. Now we are really the bodoh bodoh and the CAT the smart. Just like bodoh that believed in his persuasion to vote PAS and now must aligned ourself hand and limb to be chopped.

Maybe that PCM candidate can tap on you for election issues in Bukit Gelugor by-election?

The mangosteen is (allegedly) a cover-up of the US military hardware taken by Taliban in Afghanistan for sale to China, as exposed by the article in Malaysian Chronicle?

The next time I want to go missing in Belum Rainforest, I should get gunny sacks of mangosteens & get them verified by Perhilitan with official rubber stamps. That way, my insurance will accept the mangosteens as material proof of my accidental MIA in Nature & pay full coverage. Also, no need to “kwai-kwai, sui-sui” to proof otherwise against the law of missing. Sometimes, it’s hard to swallow a decent purplish Malaysian fruit as a contentious material proof in one of the perplexing aviation mysteries in recent history. I thought mangosteen is only available during the Hungry Ghost Month (July… Read more »

The list has stated mangosteen. The businessman has already confirmed it. Now what ?? What are all these opposition shenanigan trying to prove. Cari pasal ?? Frankly the oppostiion should not be allowed in the briefing. They will then come out with all sort of lies just like DAP LGE that blame the govt for hudud when it is their own Pakatan partner PAS that is the cause of all these trouble.

If indeed the plane was carrying mangosteens why the govt. is so secretive with
the maniifest? Even this disclosure is full of holes. No wander the opposition MPs
were excluded from all parlimentary briefings on the missing MH370 – scared of
being questioned.

More talks, more mistakes; more mistakes, more contradictions.The truth is always ONE,
but lies can be MANY. Let’s not waste our time and energy putting our fingers working
on the keyboard’ I bet even the keyboard itself is tired of all this nonsense.