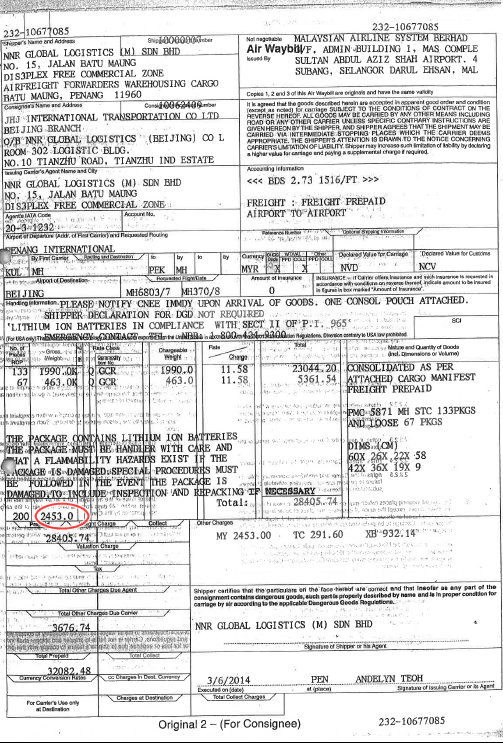 In fact, the shipper NNR Global Logistics confirms the batteries amounted to less than 200kg. But they couldn’t reveal what was in the remaining 2232kg – for legal reasons, apparently. Why not, if they were just radio accessories and chargers, as Mas claims?

The Star reported the following:

According to NNR Global Logistics (Malaysia) Sdn Bhd in Batu Maung, the batteries formed only a small part of a “consolidated” shipment weighing 2.453 tonnes.

The batteries weighed less than 200kg, a company spokesman said. He would not say what the remaining 2.253 tonnes of cargo was.

“I cannot reveal more because of the ongoing investigations. We have been told by our legal advisers not to talk about it,” he said.

He said he could not name the company which manufactured the batteries, stating that the matter was confidential.

Malaysia Airlines CEO Ahmad Jauhari Yahya had also announced on March 24 that 200kg of lithium batteries were on board the plane. He said they were packed safely.

In a statement issued last night, MAS said the rest of the consignment was radio accessories and chargers. But this has not been disclosed before and is not stated in the cargo manifest.

The MAS statement said: “About two tonnes, equivalent to 2,453kg, of cargo was declared as consolidated under one master airway bill. This master AWB actually comprised five house AWB. Of these five AWB, two contained lithium ion batteries amounting to a total tonnage volume of 221kg. The balance three house AWB, amounting to 2,232kg, were declared as radio accessories and chargers.”

The manifest released in the preliminary report on the missing MH370 on Thursday, however, shows that NNR Global shipped 133 pieces of one item weighing 1.99 tonnes and 67 pieces of another item weighing 463kg for a total weight of 2.453 tonnes. Neither the number of batteries nor its weight were specified.

The manifest came with an instruction that it should be handled with care and that flammability hazards exist. Its flammability had been the source of many earlier theories over how the plane was lost. However, most of the theories have been debunked.

NNR Global is located at the Dis3plex Free Commercial Zone at the Airfreight Forwarders Warehousing Cargo Complex, less than 100m from the Penang International Airport. The complex is guarded by the police and only those with passes are allowed entry.

At the port of destination, the consolidated shipment is separated (deconsolidated or degrouped) back into the original individual consignments for delivery to their respective consignees.

Why is the name of the manufacturer of the “batteries”, etc regarded as confidential? What is there to hide? If we can know the names of the passengers, surely we are entitled to know the identities of the manufacturers/suppliers of the cargo the plane was supposed to be carrying. It is this sort of lack of transparency that fuels more questions and doubts.

I heard many people say could be a USA military drone? … that story is all over the internet. Just search google for “pakistan drone china mh370” you will read the original story there. Boeing can remote control all their planes from the ground, the pilots cannot do anything if the remote control takes over. Yet suddenly now Boeing is silent. Who turned off the transponder? Certainly someone with good knowledge of the plane and planned it before hand. Why did the plane turn around and move to the direction of Maldives? The story says it is because USA has… Read more »

Why can’t the authorities be straight? Them with their half truths are not helping the investigation.

In March 2000, an MAS A330 was destroyed because it carried a toxic,and highly corrosive chemical from Beijing to India via KUL. So much for declarations on AWBs. Of course, it will be stated it is packed properly according to ICAO requirements etc, but knowing
MAS, can it be trusted?

Shouldn’t be surprised (if) the 2 Iranians were on CIA payrolls, much like Osama bin Laden, a proxy-scapegoat of created terror for the new world order in progress. Anyone ask why should Osama’s body be thrown to the sea without facial photo evidence, just b’cos US paranoid gomen didn’t want his tomb to be a martyr’s site symbol for future terror wannabes. A plane that went U-turn, flied low on designated course & disappeared in the dead of night without a trace beats normal air plane disaster. “Ban-ban lai ke-ke chhoe, ku-ku be-ki ka liao” seems to be CIA’s dirty… Read more »

wanna wade into the cesspool?

read themalaysian insider. allegations by experts that the recordings are edited. if thats is true (you can expect denials from you knwo who), it only creates more red flags.
whats up MAS?

Police said hundreds of people questioned incl people who picked the mangosteen, packed the mangosteen (allegedly frm Muar)…etc.
Then FAMA says mangosteen not in season in Johore.
Then police amend statement (kononnya misquoted) – only questioned packers not pickers. cannot revealed name of company coz owner begged him not to. Now checking to see if mangosteen in season in Perak.
So many contradictions, just for mangosteen!
Life would be simpler if they just said “mangoes”

As the perception of Hisham and gang trying to hide something gets deeper, the more mainland Chinese will not embark on ‘Visit Malaysia 2014’ and will not make their purchases on the Malaysian properties for their 2nd home. A big impact to our F&B sector and tourism dollars contribution to our GDP indeed. Meanwhile Vincent Tan’s Red Dragon (Cardiff) was beaten by the Magpies (Newcastle) last night to confirm relegation while wearing ‘Visit Malaysia’ on their jerseys. In contrast, Atlético Madrid wearing ‘Azerbaijan’ on their jerseys are poised to win the Spanish La Liga title as well as the UEFA… Read more »

Anything can happen. From mangosteen to lithium batteries to read attires….

I don’t really want to know more about mangosteens, lithium batteries or all the little details in the prelim report. What struck me more was why on earth Hisham and his bumbling gang kept the cargo manifest secret for so long, and refused to budge even when pointed questions were hurled at them repeatedly. Now when that manifest was revealed, it is an anti-climatic damp squib. Nothing really to justify the secrecy at all. Could be just deeply entrenched holding back as a show of power ego-tripping, but can anyone now be blamed if they wonder if that manifest is… Read more »

The circus has left, but the clowns remained, and we are back again in the same old rut.
Truth is always ONE, but lies can be MANY. It is the lies that divide people, truth unite
people. Mind you…even a bad watch tells you a correct time twice a day. Like the Bible (?)
says: Not all believers are stupid, but ALL stupid people are believers.

Which part of the Bible says that?

why are batteries allowed into passenger’s flight ? who were overseeing this transhipment & who ARE responsible for the infringement ?

MH passengers are still travelling even though the gang of three are slowly washing their hands of it, just like the first hijack crash in Johore. As time passes, nobody will shoulder responsibility or resign like the South Korean PM over the Sewol ferry tragedy……….

Daily now little by little of anomalies or shall I put it little lies that the Mas staff told and the extra weight that were waived by who and no excess weight was collected. Now you know why Mas is in the shamble that Mas is in, please remember that little drops make up the ocean ! Further investigation on this matter should be initiated and for sure it would reveal some one from (a certain party) has to be involved in this extra weight…

Care to comment on the earlier version of mangoosten aboard? MH370 doesn’t involves only Malaysia but the rest of the world. You can’t simply spin as you like. You can spin when reporting local news ! The local media thought that between our pair of ears lies a piece of useless brain. The distrust on the local media will eventually push the readers towards alternative trusted site. It is the beginning of the end for the local media if remedy steps are not taken especially political parties cannot own the media and to simply to report the news as it… Read more »

I will be writing about the mangosteens soon; so send me your ideas.

So that lends credence to the rumouredly story about MH370 carrying highly sophisticated US military gadgets to China with both Chinese & US spies on board. Sort of James Bond stuff and I’m just speculating.

Possibly more than 2 tonnes of lithium batteries onboard, but under declared?

Anyway, the US’ Country Reports on Terrorism 2013 released April 30 states that ‘Malaysia remained vulnerable to terrorist activity and was likely used as a transit and meeting site for terrorists’. So the two passengers onboard MH370 with stolen passports should still be suspects?

And they tell the china people they must not get angry as this is UNPRECEDENTED !!!

Heaven cries buckets of tears for these bodoh bodoh as God can only help those who help themselves… sigh sigh sigh !!!

Then they tell the china folks to accept the realities