MAS is in crisis after it posted a loss of RM2.5bn for 2011 while its short-term liquidity faces serious challenges with net current assets plunging deeper into the red to the tune of RM4.4bn. 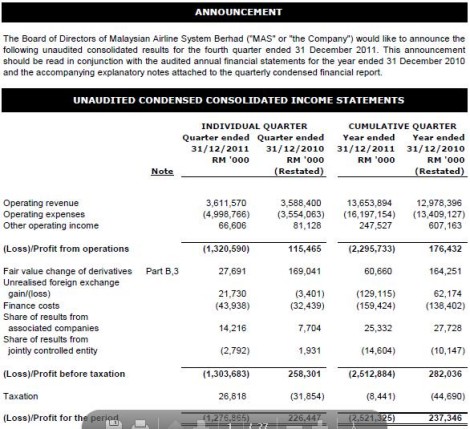 The real (unaudited) loss for 2011 is RM1.4bn but, as is often the case with some companies that post an unexpected loss, the management puts in all sorts of provisions. In MAS’ case, the provisions totalled RM1.1bn, giving a total loss of RM2.5bn.

This sort of large provisioning to add on to the year’s losses often ensures that the following year’s result will show a significant (artificial?) “improvement” or “turnaround”. If the loss is already bad this year, then might as well put in all these sundry provisions, so that the loss becomes larger and next year’s result looks much rosier than it really is – so goes the reasoning.

The MAS Balance Sheet is equally worrying. Cash and bank balances fell from RM2.1bn to just over RM1.0bn. 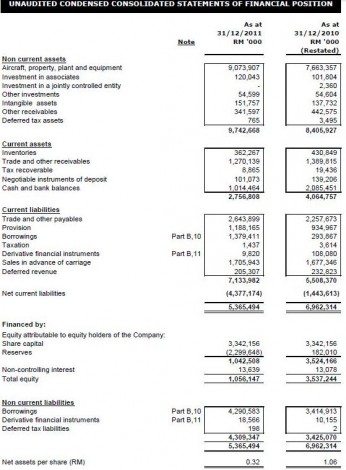 And look at the net current asset position, which indicates short-term liquidity. Deep in the red.

It is time to think seriously about the viability of the airlines after years of ‘bleeding’ and questionable management. After all, where does it say we must have a national airlines other than for reasons of ‘national pride’? But what national pride are we talking about if we are continually posting huge losses – money down the tube that could have been invested in, say, quality public transport across the country.

Can we still be surprised after more than four decades of the ever unending NEP mismanagement, nepotism, incompetence and corruption? Like this once iconic organisation, which we as true Malaysians beamed with pride whenever its name was mentioned, the Country is destined to follow the same ignominious path with present bunch of goons running it.

Billion lost – sup sup shui. Ask Perkasa, Jati , the MP frogs that jumps who wanted to protect the rights. They will contribute to defend what ever they have been screaming, yelling and even showing their armour.

They only knows how to suck.

could be some sort of auto-piloting AirAsia now as Tony has mentioned he’s looking for new leadership to replace him and other seniors.

Rafidah is on board who knows more retired BN politicians after GE13 will join the board.

remember Tony has heart health issue so a billionaire now plays his cards on his playthings like car racing and football.

We all know why MAS has been losing by the billions because it is run by who …….? What is the budget airlines Air Asia is making millions even though it is only pittance when one is to take into accounts of what the capital investment is. However little profit it may be it is managed by a non bumi and without any financial support from the government.

Why don’t the government just cut the chase and start appointing people who knows how to run the business, be the person a Chinese, Indian, Kadazan, Bidayuh, Murut, Iban, etc. I still can fondly recall the days when MAS was under the stewardship of Tan Sri Saw Huat Lye. Right from the reservation counter to the cabin crew, everyone seems to know their place, and I have no complains about the services rendered during this time. There were air stewardesses who could even speak 2 to 3 languages and this helps a lot in terms of public relations with the… Read more »

Many people can ask good questions like you but strangely still vote for BN to perpetuate the problem!

Since the spendthrift days of ApaNama adventurism in all things ApaEgo, where is the sense of national money management (of Ah Kong’s monies)?
At least the simplicity Ah Peks at inconspicuous kopitiams are better with their little cash in Milo tins which they can stretch-budget for months.
MAS is liken to an almost broke and retiring guy who still wanna drive a SLS AMG Mercedes in KL Times Square on 1 litre of 95 petrol on spare cord.

surprise with so much apanama misdeeds yet no prosecution for rakyat $ lesap into the air like smoke ?

no wonder apanama now very worried when someone else helms putrajaya …. think along marcos, mubarak etc..

Malaysian financial control is porous even a snake charmer can charm his way out of Boleh Land with hand carried money legalized in Snake Venom business! (metaphorically speaking unless I get bitten by King Cobra).
May find a Kerala associated doctor and ex-politician who sells snake venom oil as a legalized past time!

Read about ” Let’s learn from Mahathir’s mistakes ” in this great letter to malaysiakini:

Read about the 10 mistakes of Tun M here:

Certainly a good reading for all!

Fear not, super duper Tony is here. Soon, ALL can fly.

car fanatic
Reply to  Andrew I

sorry lah ….. tony has cashed out and focus his time on hobbies like QPR football n F1 racing cars !

Andrew I
Reply to  car fanatic

Wasn’t there some kind of share swap with Tony holding 3/4 of a baby?

Fahmi
Reply to  Andrew I

Do not have too much hope on Sir Tony.
He may not focus on AirAsia lately as his investment in QPR is in danger as the team could well be relegated.
With F1 season coming, Sir Tony may spend less time on AirAsia management…

Tony Fernandes has no business getting involved with QPR or for that matter any EPL team. There is nothing in it for him except fame, but no fortune. No he does not have deep pockets, he earns a currency that is 5 times lower than the Pound. He also runs an F1 team that makes up the back makers and will remain there for centuries, again no one knows what he is doing there. As Bernie A of F1 said, these guys should take off their glasses and look at the world in a more real way. From the games… Read more »