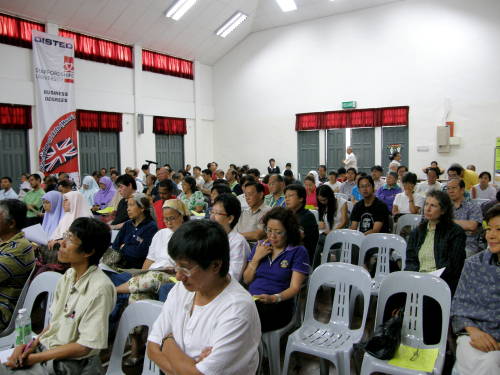 4.30pm – The world is watching civil society in Malaysia, which is blossoming and acting as real agents of change. “I’m enthralled by the response of you participants who have stayed on the whole day,” concludes Ahmad Chik, the moderator for the final session, thumping the table with satisfaction.

The participants of various ethnic and religious backgrounds, young and old, adopt a Penang Forum declaration for submission to the state government. Enthusiastic participants are signing up for various working committees, which will work on specific issues and come up with papers within three months. For the first time in years, many feel empowered and think they can make a difference.

4.00pm – Francis Loh points out that without local council elections, there is no mechanism to hold local councils accountable.

The Local Govt Elections Act 1960, Sec 5A (1) allows state governments in consultation with EC to hold local council elections. But the Local Government Act 1976 states that “all provisions relating to local government elections cease to have force or effect.” Still, Section 1A says the state authority may exempt any area within any local authority from the provisions of the LGA.

In the past, councillors (numbering 8-24 in all) were political appointees (largely male) and ultimately responsible to the state govt. Thus, the state was able to dictate the local govt agenda. The role of council president is critical but unfortunately, there has been no accountability.

Pending the reintroduction of council elections, there should be fair representation of women and other independent representatives. To promote accountability, council meetings should be made open to the public and the media. Similarly, committee meetings on land development, transport and environment matters, financial matters and tenders should also be open. Non-performing and corrupt councillors must be removed and detailed financial statements be made public.

NGOs can pursue partnerships with the new State Govt and hold regular meetings with the CM or Exco.

A restructuring of local govt in Penang is needed. Maybe there should be two councils on the island – one in Balik Pulau perhaps – and more than one on the mainland. Currently, less attention is given to the western side of the island and southern Prai.

One participant requests that the city status of George Town be restored, receiving loud applause from the floor. Another adds that we should also push for an elected mayor.

S P Choong points out that massive development projects require that objections be accepted only from immediate neighbours – when the impact is felt in a much larger area. Moreover, no reason need be given for rejecting objections from neighbouring residents.

Francis stresses that one big way to deepen democracy is to decentralise decision-making. Local democracy would be a significant step in this direction.

Lin Lee suggests that the new state government review some of the contracts for services that had been contracted out to the federal level.

A librarian proposes a Freedom of Information Act.

The tempo is picking up. People are now queuing up at the mike to raise questions and comment on:

– the possibility of publishing a Penang Reader

– the importance of reducing garbage – more recycling is needed

1.30pm – A university student spells out what is wrong with education. According to the THES ranking, Malaysian universities have been slipping off the radar of the world’s top universities. She highlights the impact of the University and University Colleges Act. Students are humans too (!) and therefore should be granted full human rights. The UUCA forbids students from saying or doing anything “which may be construed as expressing support, sympathy or opposition to any political party or trade union or as expressing support or sympathy with any unlawful organization, body or group of persons”. Lecturers too have to sign an Aku Janji pledge but dozens have refused.

She also speaks out against the corporatisation of universities, which has displaced academic culture with corporate culture. In its place has emerged a corporate and bureaucratic culture. Universities have begun to seek new sources of funding, introducing twinning programmes and raising student intakes. Students have been turned into products catering to the market.

12.59pm – A spirited Lim Kah Cheng draws loud applause when she suggests tax reforms to allow the state governments more say in deciding how our tax money is spent.

She explains that the politically correct term for disabled persons is persons with disabilities (PWDs). The ‘person’ comes first. Their actually needs are the same as the rest of us: quality education, decent incomes, leisure activities, the right to raise families, shopping and paying bills. But we tend to forget about them. We need a paradigm shift: PWDs need their rights promoted. Obstacles to access opportunities must be removed.

What is good for them is good for everyone e.g. ramps, lifts, bigger toilets, signages, larger print, disabled friendly public transport. A by-law in forces since 1993 requires all buildings to provide disabled access. Planning should be inclusive in its design and conception.

12.14pm – Kris Khaira then touches on workers’ issues. He highlights how the government has over the years been weakening the trade union movement. Workers who are active in unions can sometimes find themselves harassed by management.

One of the demands is three months’ maternity leave and one month paternity leave. The other demand is RM900 minimum wage and RM300 cost of living allowance and not more than 40 hours work a week. Jerit, an NGO coalition, has suggested a retrenchment fund should be set up with contributions from both employer (RM1 per worker) and employee (RM0.50). Alternative housing is also needed by retrenched plantation workers.

The same policies should be extended to migrant workers, who must be given the same rights.

11.46am – After animated conversations over the coffee break, the forum resumes. Many among the 150 participants, of diverse background and ethnic origins, are eager to speak and air their views. The next presenter, Prema Devaraj, calls on the state government to respond to the needs of women especially the protection of women and children.

We must ensure the full and equitable participation of women in the economy. Affordable facilities for child care are needed. Pay equity, flexibility of hours, a code of practice against sexual harassment and a minimum wage are needed. Training is also necessary to upgrade skills and empower women. A committee should also look into the rights of women migrant workers including domestic workers.

10.59am – Lin Lee briefs the audience on the world heritage listing for Penang. The application that has been submitted is titled “Historic Cities of the Straits: Malacca and George Town”.

She lists the advantages of a heritage listing: economic returns/appreciation in value, new business opportunities, increase in tourists, and prestige.

Conservation is needed to the protect heritage values and preserve cultural significance for present and future generations. Unesco requires a heritage management plan.

One participant brings to attention the importance of public libraries, which should be an essential component for cultural strategies.

10.40am – Tan Sooi Beng then speaks on the arts in Penang. Penang has rich and diverse cultures with home-grown singers, actors, and poets. We need to support the arts as it creates a sense of identity and social and political expression. It will have a positive impact on the youth. A culturally vibrant place can attract professionals to work in Penang.

But there is a lack of performance venues and rehearsal spaces, high rental costs and last-minute cancellations. Too many permits and high deposits. More arts events and festivals are needed featuring diverse cultural groups to bring audiences together and to provide space for local artistes to perform.

Himanshu Bhatt says there is no dearth of cultural facilities going on but what is required is more publicity for these events.

10.30am – A priority now is to do everything possible now to make subsidised public transport system like Rapid Penang work, says S P Choong.

One participant suggests that the second bridge be a dedicated light rail link to start from Butterworth and Prai and end up near the outskirts of George Town with a good bus feeder system. He says that the ferry service should be expanded rather than reduced as it is a delightful and practical way to commute.

Perhaps another possibility is an integrated subway system between the island and mainland, says another, while a third participant wonders how there can be a shift in the mindset of Penangites to turn to public transport.

Another argues that the taxi service should be improved with the use of meters enforced so that more people will be encouraged to use this mode of transport.

Lin Lee recommends the O-bahn system found in Adelaide. It uses ordinary roads with a special fleet of buses. As it exits the city it uses an electrical rail system on river embankments. And it is cost efficient.

10.14am – One academic says we should also consider the rural situation and the situation in Seberang Prai in the forum.

9.56am – Dr S P Choong now talks about traffic snarls in Penang. Public transport should be an essential public service and subsidies are needed. What we need is a pro-public transport environment.

Penangites are car-dependent because it is a necessity. It is a necessity because there is a planning culture framed by a mindset which feels that public transport will never come. So there is a pro-car environment, streets are widened, pedestrian walkways are narrowed, one-way streets introduced. It is dangerous to even cycle. Penang has one of the highest vehicle ownership per capita in Malaysia – higher than Singapore and it is rising 10 per cent annually.

9.45am – Why are their so many high-end apartments in Tanjong Bunga – for foreigners, wonders a Penangite.

What can ordinary Penangites do to preserve the environment? How was Singapore able to provide open spaces for 4 million people? Penang Island has only 700,000 residents. One possibility is to turn unused back-lanes in housing areas into green spaces.

9.40am – The people of Penang have to guide the new state government about their priorities, says a member from the floor. But only critical issues should be brought to their attention for immediate action, says another.

9.30am – Leong Yueh Kwong presents some of the serious environmental problems in Penang: the impact of land reclamation, hill slope development, the closure of beaches to the public. He also points out that there is a lack of recreational spaces in Penang.

9.15am – Ahmad Chik opens the Penang Forum, highlighting the role of NGOs and how they came together for last year’s Pesta Rakyat Merdeka. They also successfully opposed the Penang Global City Centre project. But the biggest breakthrough was the result of the 8 March general election, which has given many Penangites real hope that meaningful reforms are possible. There is a buzz of anticipation in the air among the 150 participants as the forum gets underway.