Political parties in Malaysia can learn a thing or two from Parti Sosialis Malaysia: the party has made it a point for their two elected reps and three councillors to disclose their assets and income to the public every year. 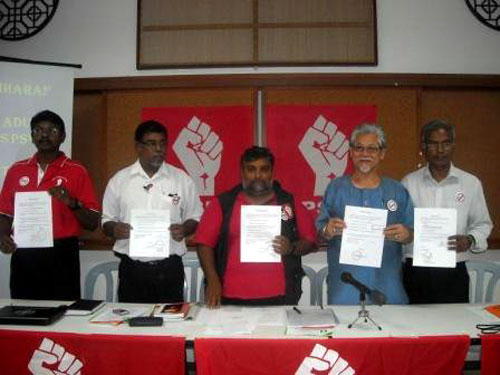 Their asset disclosures are each accompanied by an annual performance report.

You can see the asset disclosures here. Even so, the format could be improved to include disclosures of the assets belonging to immediate family members and comparative figures for the previous year to indicate if there has been any significant increase.

After all, which crooked politician would be stupid enough to acquire substantial assets in his or her name.

If the Pakatan parties want to be different from the BN, then they should seriously think of undertaking similar asset disclosures.

The Selangor Pakatan government leaders may have done a disclosure of sorts once but its forms did not really reveal their assets. The format needs to be revamped.

What about the other states?

Have you thought of the consequence, Anil?

Let’s say there is a very wealthy guy, but not many people know of his wealth. None of his wealth is off the ill-gotten kind, btw.

The guy wants to serve the nation.

By the standard of those in the picture above, that guy must declare to the world his wealth.

You want him to be a target of kidnappers, Anil?

Or are you saying that rich people have lost their right to serve the people, by default?

I commend PSM for the altruistic act, but if we are to view if from another perspective, how many people with considerable wealth will want to be in politics if this is what must be done. Without being disrespecful, PSM leaders have nothing much to hide because they don have `much’ compared with those in other parties. Many countries required their elected representatives to disclose their assets to an independent panel and I believe this is the better way to go. It’s a win-win for all the parties involved.

How can you compare? PSM is also a socialist party like PAP or DAP but more on the left.

We need dedicated people but if they have no talent and grey matter, the country will suffer. Look at Singkapore. In early days, the industries are manufacturing tires and textile. Then they have to change as Malaysia, Sri Lanka, Indonesia, now Cambodia, China also take this route. If we do not have visionary leaders, how do they place rice on the table for rakyat like us?

I am a Malaysian working overseas for the past 11 years and am sick and tired of most political parties and its leaders back home, who just talk and are not working hard for the benefit of the rakyat . I , however applaud PSM who seems to me may be small in its presence but with a lot of sincerity and great leaders such as Dr Nasir, Dr Jeya and Arutchelvem who do not care for personal glory but are simple human beings who just want to do good for the rakyat. I have been following their activities for… Read more »

go ask your toyo and rosmah to disclose first lah.

aiya. RM3.5m mansion only. i also want to buy lah…

ask me….Rob as much as u want but do what is right for the country and economy.Buy bringing up these u can rob more.yet don’t forget to revert it.It’s just a cycle.All the politicioan in wealthy country does this but they don’t forget to keep the economy up and keep some of it to the people and country.

Dear anil, I’m sure it’s unfair to compare politicians to tycoons and billionaires. For a start, these wealthy people do not lead as public lives as politicians. They also know how to protect themselves with bodyguards, security systems and high gates. Politicians have to be accessible to the public and attend innumerable public functions. Revealing their wealth may also subject them to all manners of pressure for charity including undeserving cases. Put yourself in their shoes, Anil. How would you like to declare all your assets to to your friends, relatives and colleagues? How would you like to do that… Read more »

The arguments against asset declaration are deeply flawed. It isn’t called the ‘public sector’ for nothing. These people don’t compete in industry to get these positions, they ask the people for their permission to represent them. It’s only natural to ask “who are you?”. Asset declaration has nothing to do with idealism. The reason why a public representative should declare their assets is that they are given a level of control over policy, law and planning which can greatly change the wealth of the individuals they are supposed to represent. The natural temptation is not to change laws, policies and… Read more »

But I agree with the other commenters here that politicians also deserve some privacy. Cuz there are situations where people don’t want to reveal all their assets, in case relatives or ex-wives want to be manipulative or cause problems for them. There are many such situations we must consider.

At the same time, mechanisms should be in place to ensure that they are not enriching themselves with public resources.

Point taken, but if tycoons and billionaires can have their total assets published in Forbes etc and other Top 50 or Top 100 lists … why are politicians, who are called to higher standards of public accountability and transparency, so “shy” to disclose their assets to the public? After all, they are supposed to be public figures…

Unless they want to pretend that they are poorer – you know, “politician of the people” sort of thing – than they really are? In which case, are we being taken for a ride?

It’s idealistic at best. Aren’t politicians entitled to some privacy too? Bringing in their immediate family members is unfair. There’s also the security risk of disclosing their wealth if it is substantial. Do they have to employ bodyguards to protect themselves and their family members? For me, I don’t mind politicians not disclosing their wealth to the public but they can do so to an independent body (not MACC). Unlike HK, our anti-corruption laws do not allow action to be taken against public servants for living beyond their means. Hence even if a certain politician in Selangor has a RM26… Read more »

Ask LGE to disclose his asset! Too scarce to let other to know?

Why only target on LGE?

I’m impressed with the PSM, despite the dated (it seems to me) rhetoric on their website. I like their stand against ‘parachute candidates’, but the “serve 5 years in the constituency first” seems guaranteed to ensure they’ll never grow.

This exact same question was posed to both Barisan Nasional and Pakatan Rakyat last year when Parti Sosialis Malaysia (PSM) declared its assets, in another blog: see right here.

True to their party’s principles of integrity.accountability and transparency. All other party reps SHOULD EMULATE these great political actions