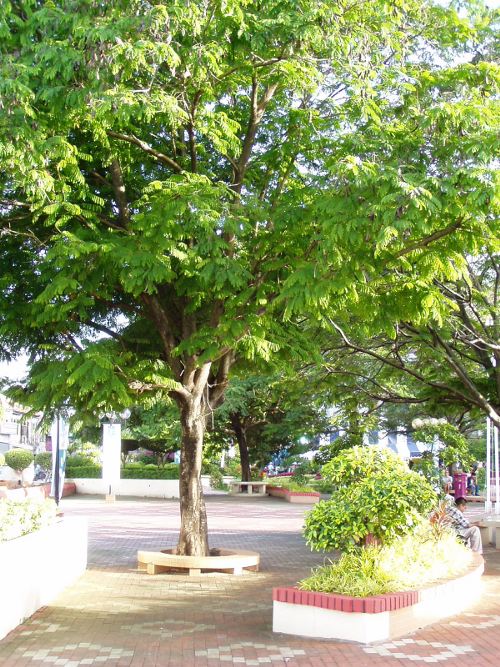 Before: Majestic trees provide shade for weary pedestrians next to the concrete jungle that is Komtar Photo by a concerned George Town resident 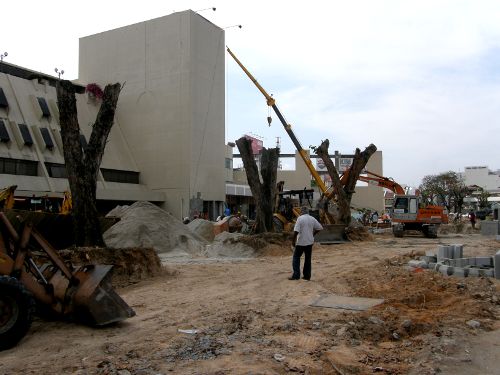 After: Going, going… and gone before you know it

They just can’t stand the sight of any greenery.

This was the scene at 3.30pm today outside Komtar, where about half a dozen trees lay mutilated while around them a crane and a bull-dozer snorted and grunted.

From what I understand, even simple tree pruning – let alone hacking and chopping – requires prior approval from the Penang Municipal Council. And from what I hear, an application was received by the Council last week, but before it could be approved… well, you can see what has happened.

Can the council and the state government confirm if they had given approval for the tree-cutting at their door-step?

Could we have some CAT here so that we know what is going on?

Whilst the rest of the planet is going green, Penang is still stuck in a 1970s mentality. So much for CAT; I think it’s CRAP (Continually Ruin Anything Pleasant).

It’s ironic. There was a talk on the expansion of the Botanic Gardens today. Expand one side, chop in the ‘heat island’ (trapped heat in built-up areas) on the other. These guys aren’t lining up for the Noble Peace Prize.

Apparently, some private firm is paying for this “beautification” project…  If the state has approved this, why aren’t they showing the public the plans? Or have they?

Funny they did it on Friday, school holiday, etc. Metropole, here we go again. They must think we are thick, blind or really don’t care… just like them.

It’s a pity as some of the Komtar interior upgrading work looks fabulous, especially the entrance area to Maybank. The irony is that the cladding on top of the tiles in the lift lobby after the entrance bears a tree motif.

Meanwhile, the Esplanade has still not yet been repaired after the tennis fiasco.

Someone is heard saying the following:

“Evidently, he is not even aware that every breath he takes is provided by these trees.”

If my every breath depends on those few trees near Komtar, heck, I would have been dead, like days ago already.

What does “he” meant by chopping down a few trees only and we are jumping. Evidently, he is not even aware that every breath he takes is provided by these trees. Hey, wake up and try to love nature more to provide a better world for your future generation. As for the massacre of these trees, I am too shock to think that PR is partly responsible. Please do not let me think that I have placed my trust into the wrong people by voting for you. Too much time has been spent on blaming the previous government. Grow up… Read more »

well said J Yeoh. If indeed the application was sent that day (or day before), entirely possible they “jumped the gun”.

PR also inherited the lumbering bureaucracy of BN style govt. Takes a while to change all that.. 🙂

The so-called pruning of trees in front of Komtar and indeed any pruning or cutting down of trees in Penang (and indeed anywhere) is uncalled for. While I am, at least for the mopment, prepared to accept that perhaps the present State Government was not advised of the decision (to “prune” the trees), I would expect the Government to come out with a detailed reply on who had ordered/approved this action and what action the Govt is taking to stop this needless “degreening” of Penang. To be absolutely fair to the present Pakatan Government not only in Penang but in… Read more »

Chopping down a couple of trees and you guys are jumping mad?

Jebat is perfectly correct. Trees and concrete buildings in harmony.
Matter of better planning. Singapore is a good example.

not only that the trees are fell, the mppp officers are (allegedly) going round air itam area asking for sort of protection money from shop owner. these shop owners are complaining & fast disenchanted with the present state administration. What hd happened to the anti-corruption drive or promise made during the GE?

what the hell is going on?? hey, it less than 1 year old but thing seems to be getting out of hand. imagine what will happen the next 4 yrs if this rate of self-destruction is not stopped now.

There are many reasons to prune a tree. One of them is safety. I see a crane in the background. Could it be that crane operator needs vision to work safely?
Please google “How to prune a tree”

We also have to be fair to all parties.. While the trees do provide shade and better environment but the root will cause damage to structure such as buildings and even padestrial…

Going green and development can be parallel, but choose the correct type of plant that will not cause damage to structures.

Oh my, see what happens when we have a Government that is too business oriented and lacks the knowledge of preserving the environments, think those trees must be more than 10 years old…

Its damn stupid, I say! Stupid people running the place down!

How can we propogate environmental laws when we are now merely only at a stage of fighting corruption, plundering and stealing?

MY OPINION IS VERY SIMPLE OUR NEW ELECTED PENANG STATE GOVERNMENT IS NOT SERIOUS ABOUT THE ENVIRONMENT, IF NOT THIS WILL NOT BE HAPPENED !!!
CAT – YES!! SOMEONE NEED TO BE RESPONSIBLE FOR THIS ACT !!!

oh my… 🙁 they were such shady trees..

what is happening to my lovely state!?!

I hope they leave those old trees alone, the ones near St George’s etc for example.. 🙁

in the times of global warming, we need those trees and these are part of our history too!!!

They want it to be a fully concrete jungle.

Don’t think penang is ready for green roofs when then can’t look after the bit of green we already have – Padang kota – more blue / black than green and now this!