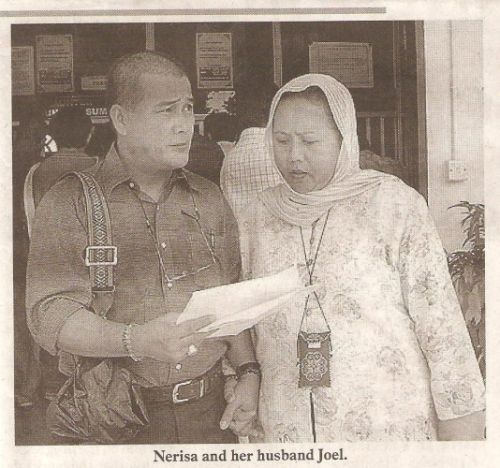 From Sabah comes an interesting case. A couple from Tawau, Nerisa A Kassim @ Nerisa Abdullah and her husband Joel Leona @ Jalil Abdullah, have filed a RM3 million suit against a female relative of Nerisa’s and a former private secretary of the Sultan of Pahang for alleged deception and misrepresentation. The female relative, who is trained as an accountant, is the daughter of Nerisa’s mother’s niece; both she and Nerisa had been brought up as sisters by Nerisa’s parents in Sabah.

They allege that Nerisa was duped by Nerisa’s relative and the former secretary into signing a blank form, purportedly to buy shares for Nerisa. The couple allege that the securities trading and bank accounts that were opened in Nerisa’s name were later used by the relative and the former secretary to move large sums of money – including a cheque for RM2 million – without her knowledge.

The couple are also suing the securities firm and the bank, where the accounts were opened. Nerisa claims she only came to know about the alleged deception when she applied for a bank loan with a different bank in Sabah only to be told she had been blacklisted for the earlier share-related transactions. A judgment in default amounting to RM294,934 in favour of the securities firm in Kuantan for those suspicious transactions had been sent to an incorrect address in Tawau, which meant Nerisa might even have been declared bankrupt without her knowledge had she not been alerted by the rejection of her bank loan application.

Here is a Daily Express press report giving more background to the case (click on image to see enlarged version): 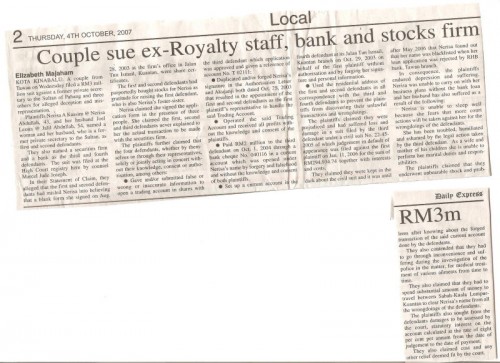 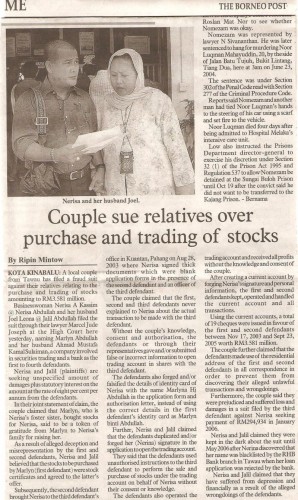 Nerisa and Joel can expect victory ,Anil . Numbers dont lie they say ,so anil that cheque number, No 040116 is that Ambank ? coz banks have a standard reference number for current account . I’am dealing with cheques every end of the month , maybank ,cimb , standard charterd each have their own ,.. Anyway i dont understand the post bout the 2 individuals Nerisa and Jalil’s quest for justice . You mean anil the Ex Secretary of Sultan Pahang is involved ? I’m an avid fan of the Malaysian royals.I liked to read their history and their so… Read more »

Aiyo, this scam is so common. Ask any stockbroker aor anyone who knows stockbroking and they can tell you that drivers, gardener, etc are nominees used by certain people to trade in shares. And most of the time, the dealers, remisiers and management staff of securities firm are aware of this. And RM294K is considered chicken feed to these crocs.