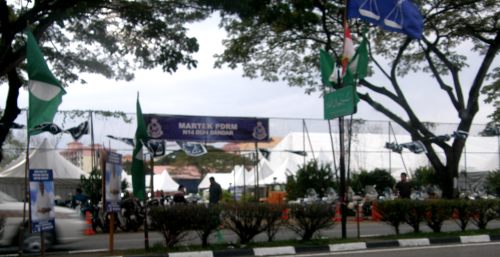 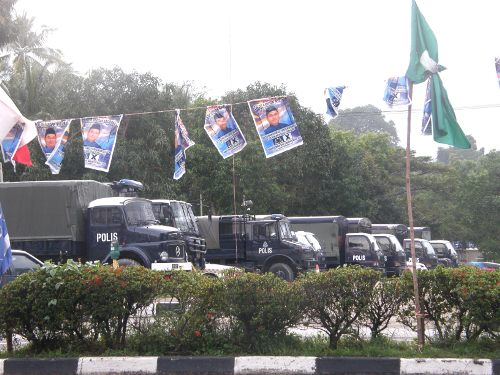 Here’s the bill for the deployment of 3,376 police personnel during the Kuala Terengganu by-election (as reported by Bernama with my comments in brackets):

Blog reader Ganesh from KL is thinking of quitting his job:

This figure is utterly shocking in an environment of economic downturn. Is this how the BN-led government conserves money during an economic downturn? If the police alone can spend RM15 million on such a small election, what was the final bill for all government agencies during the whole by-election?

Also, if the police can spend RM15 million on just one constituency, what happens in a general election? What is more intriguing is the detailed bill for the RM15 million figure. A shocking RM6 million, the  largest item, was spent for the rental of canopy.

I am resigning from my job with immediate effect and starting a canopy rental company. If a few days of work can reap RM6 million, in a fiscal year, I can easily make a couple of hundred million profit. This is definitely the business I want to go in. The profits are far higher than what most Bursa Saham companies make.

Wonder what the bill is going to be like for the coming by-elections. Then again, the expenditure could be included as part of the economic stimulus package!

That’s why Malaysia is close to bankruptcy.

How many canopies they rented? RM 6 millions? Isn’t that a huge amount? With this amount of money, it could be used to construct 200 low cost houses already. And bear in mind this is not purchase of the canopy but only rental.

With all that, the use of Postal ballots, etc…& THEY STILL LOST KT !

ah… but don’t think that they will foot the bill.
i know many catering, printing and canopy suppliers that never got paid –
don’t believe? go ask the chinaman canopy supplier in Penang and watch him weep.

aca, are u to dumb to realise that the author was being sarcastic when he says he wants to start a canopy rental business?

“Yes, you may dream on to start a canopy rental business in order to get rich from these people but can you get the business? Of course not. (Perhaps your chances would be better if you were):
1) A Muslim bumiputera
2) An Umno member
3) A close crony of Umno”

If the media reporters claimed that they had given money, the voters in KT were given all sorts of goodies, BeNd so call volunteers were given allowances and hotels accommodations for weeks, tell me how they are going to account for all these expense? If the police were given so much allocations, once thing is for sure, the BeNd make sure the Police will not abandon the orders given to them in case of trouble. Look at the situation when there is demo. Opposition always cannot get permit. BeNd no problem to get them. BeNd demo, Police give escort servive.… Read more »

Ganesh, thanks for the tip-off. you just lost the deal. I have it fixedup with a great bumi. No Ali Baba. Its a real JV. He will buka jalan for me. I take him to China to have a look at tents. We agree tens are tens and split down the line. We gonna get 20% more. Hmm…my conscience is killing me. Ok, Ganesh. How about Muhiibah biz subject to my partner’s consent. Since you give us this bright idea, we go three ways. 1 for you and 2 for us. But, the price will be double. Everybody happy, no?… Read more »

Another …. from bee end. That was too much. 6 million for the canopy. Total 15 million spent on police force on 10 days was a waste of rakyat money. Lets kick umno out!!!!!!

Any guesses as to who owns the canopy company?

Is it the same company which provides tents for National Service?

I am not paying my taxes! The IRB should no penalise me because I am robbing myself!

This is how they spend taxpayers’ money and the country’s wealth. Do the poor kampong folk know all about this? It reminds me of a packet of Maggie mee that cost RM4.50 ! Really sad…. we are slogging day and night to make ends meet and these people are spending like nobody’s business.

Does the police force need pisang goreng as dessert? maybe i can make a couple of millions selling it to them.. 😀

GUess I was not the only person to nearly go bonkers that the police deemed it right,properand needful to spendall those big bucks to do whatever they felt was needed during the KT by-elections. But the amount surely begs some serious looking into. RM6 million for canopy rentals? The rakyat are facing escalating crime rates, with many falling victim to rapes and killings at the hands of moreandmorevicious criminals. More and more housing areas have been turned into privately guarded communities, with each household paying hundreds of ringgit per month to do the job which the PDRM should have been… Read more »

And who is the contractor for the canopy? You know, I know!!!

I suggest who have resigned to go into canopy business, kindly feedback your business situation after a month or 2. Only then we can see if you really learnt any lessons!

Who care? Your money is my money.
You won the election.
I collect the winning chips.

UMNO cornies in KT are all laughing to the bank …

This is only one of the god knows how many cases of sheer wastage of public funds.

The usual questions that seem to have no answers or actions:

Where is the accountability?
Who is responsible?
Are there any elements of corruptions?
What are the actions against the culprits (if there is any irregularity)?

Anybody care to answer or your answer is as good as mine?

At the end of the day, semuanya OK in this Bolehland.

If they buy the canopy..
it wont reach 2Million. (with aircond etc)

but this 6 million just too much!.
totally rubish gov we had now. Next 13thPE, make sure wipe them all out!

Canopy rental $6M in rental? BN must be kidding Then to buy them must coat 2 or 3 times the rental cost? So China, Palestine must be spend a lot to house the refugees!

Vote for Bee End againlah, paying tax like no body business, they are spending like no tomorrow.