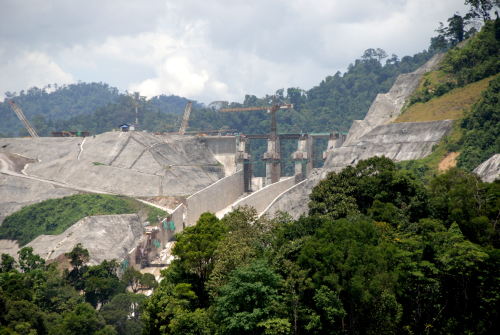 Even before they can make up their minds what to do with all the electricity to be generated by Bakun, they have already started preliminary work on the 944MW Murum Dam, which is just 60km upstream from Bakun. Remember, Sime Darby has pulled out from the project to lay undersea power cables to the peninsula.

About a thousand indigenous Penan will have to make way as their homes will be submerged by the Murum.

How will the Murum Dam, which will be constructed in the Bakun catchment area, affect the Bakun Dam?

These are some of the issues I looked at in writing this piece for IPS:

PENANG, Malaysia, Sep 27 (IPS) – Preliminary work on a 3 billion ringgit (875 million dollar) dam in Murum in the north Borneo state of Sarawak has put the spotlight on a controversial scheme to build a string of public-funded dams to provide cheap electricity for energy-intensive industries to the state.
Its advocates say that the proposed 944 Mw Murum Dam, near the site of the contentious 2,400 Mw Bakun Dam, still under construction, in the upper Rejang basin in central Sarawak will boost job opportunities, diversify sources of electricity generation and draw new investment.

But while private firms may benefit from the dam construction work and cheap electricity, critics argue that the human cost, the financial burden and risk to the state and the public, and the environmental cost could be too high. Full article ‘Power-Surplus Sarawak Funds Another New Dam‘ here.

Do u think Murum & Bakun dam is safe ?
Will Sarawak be drowned IF the dam made in Malsysia give way ???

Why there are no NGO in Sarawak on environment to stop the project?. No protest or court action, where Pakartan rakyat. What happen to the Native right? Clearing the forest and bring in major pollution industries. What kind of policy is that – sarawak bolih. Bear in mind the Taid family is like Soharto family, one day it will fall. Sarawak ppl should stand up.

Why is Murum proceeding? Simple, to guarantee that the smelter plant in Similajau happens. Rio-Tinto will not proceed with investing in the smelter project until they know for sure that there will be sufficient power. The full feasibility and EIA (perhaps the first EIA for a major project in Sarawak that will be available to the public) have not been finalised. Is Rio-Tinto convinced that Bakun can deliver the power over the long run? In theory Bakun should be able to supply sufficient electricity. But logging and development activities upstream of Bakun raise doubts about the initial projections for Bakun.… Read more »

Anil today we sing praises for future pr govt,what makes you think they will be any different from the beend govt. I say this after seeing sel pr govt, lots of talk but no action,only action being supporters getting contracts for cronies.If you want an example check out the contract given to … crony,the park by the klang river in klang. There many more examples of abuse and it has only been what 7 months of them running the state and already they are behaving like the bn govt.Politicians are all the same, the only way around this is a… Read more »

Dear anil,
…In Sabah they want ro build a 300MW coal power plant in the middle of a tourist spot (sepilok Orang Utan forest reserves and 5 km from town, with thousand of tourist visit per years. In the sea is the Sandakan Bay fishing ground and full of marine life and mangrowth swamp. Only reason we can think of someone what to make billion out of this project.

Only in Malaysia that politicians’ children are openly named as beneficiaries of government mega-projects and no one bat an eyelid! WTF is happening to my country, man!

Just today, we can see the mini landslides and red earth covering a whole stretch of road along Tanjung Bungah due to the hillslope development of super-luxurious bungalows… if Koh Tsu Khoon wants to claim development for Penang, I will remind him of these projects on the hillslopes of Tanjung Bungah. Thank God we managed to stop the crazy PGCC project.

Where are they going to sell all that electricity? Maybe that is not their worry. They just want to make the money building it.

So, who pays if not the taxpayers? This is plundering in broad daylight.

I am sorry to all of you anil, you all are like my brothers. … and TEACHERS

Hi Dalbinder, no need to apologise, you are welcome here; feel free to add your views, no matter how critical. cheers, man. Anil

The theme is this is yours this is mine in Sarawak. I am suprised no one from PRS who are suppose to be champions for the natives as far as NCR is concern voice this out. But that, it is going to be a frenzy of Dam building as this may be the last piece of cake left. Poor fatt A, her hands must be tired of writing vouchers to gelp Mr C siphon funds out, but who cares, the fees is good at 5% per voucher signed with your photo copy of IC. I think CM Taib may use… Read more »

I suppose in the imminent demise of the ruling elite,… for any given reason – reasonable or not! After all they’ll need an extremely heavy war chest to even consider an attempt at a political comeback after a respectful interval of absence from government. Once a politician, always a politician, especially if you’ve tasted the sweet opium of absolute power!

Hey Anil, believe it or not, i joined DAP at 8pm last nite. had a meeting with my uncle , YB Karpal and cousins (his children), and submitted my form, i have realised, well to me it was simple, i gave BN a chance, always they maaf zahir dan batin but they never do it . say only today pak lah on awani, maaf kalau salah dan silap, not even zahir dan batin words u knoe, he direct said maaf kalau salah dan silap, haha … food on the air meaning even in aeroplane is controlled by his family, whatelse… Read more »