Bukit Gasing residents campaigning against a property development project on a steep hill-slope are showing other Malaysians how to push for greater accountability from local government. 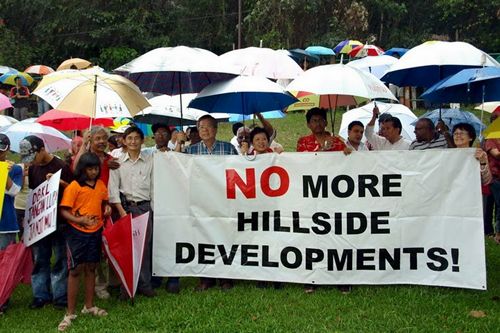 Their struggle shows that local residents need not remain helpless and disempowered when confronted with unsustainable development or environmentally risky projects by private developers. The residents’ campaign to save the area, which began in 2005, is finally seeing some light: obstacles have been cleared for the residents to now mount a full-scale legal challenge in court.

PUTRAJAYA: Some 108 residents of Bukit Gasing can now proceed to challenge a development order for a hillslope project in the area at the High Court.

The Federal Court has refused to grant leave to the Kuala Lumpur City Hall and the project’s developer Gasing Meridian Sdn Bhd (GMSB) to appeal against the Court of Appeal’s decision against them.

On Nov 20, the Court of Appeal dismissed the appeal by the two parties against an earlier High Court decision which granted leave to the residents to seek a judicial review to quash the mayor’s development order.

Yesterday, Chief Justice Tun Zaki Tun Azmi, who sat together with Federal Court judges Justices James Foong and Md Raus Sharif, ruled that the full merits of the case should be heard first at the High Court.

The Bench also ordered KL City Hall and GMSB to pay RM20,000 in costs to each of the residents.

R. Sivarasa, who acted for the residents, said issues to be heard would be whether residents in Kuala Lumpur had the right to be heard when a development project took place near their houses.

“This case is of public importance and raises important questions of planning policies of City Hall,” he said when contacted yesterday.

Sivarasa said the residents contended that they had the right to be heard under the Town and Country Planning Act 1976 which was now in force in Kuala Lumpur.

“The residents claimed that the City Hall’s development is violating the existing Federal guidelines on hillslope development which disallow housing development on slopes of more than 25 degrees,” he added.

Then Kuala Lumpur mayor Ruslin Hassan had issued an order dated Oct 2, 2007 to GMSB allowing the developer to carry out earthworks and subdivisions in the area.

In their application for judicial review filed on January 2008, the residents named City Hall and GMSB as defendants.

The residents claimed that the mayor had failed to take into account that they had a right under common law to be given due notice, and be given a chance to voice their opinions in the decision-making process of planning.

In a statement last year, GMSB reiterated that all approvals, including the development order, hoarding permit and earthworks permit, had been obtained and that the project had been reviewed by the sensitivity committee of the Federal Territories Ministry, which had representatives of 13 agencies.

Bukit Gasing is actually twice lucky with another unsung hero. Discrete yet effective local ADUN Edward Lee, actually holding the banner on the pic though without any party or state paraphernalia.
Kudos to Ed, whom you can still bump into the LRT from time to time. Malaysia is truly blessed to have such Yg Berkhidmat, I am also thinking of Subang’s Hannah Yeo among others, who are there simply to serve the Rakyat.
Quite a refreshing change from chauffeured-around self-convinced VVIPs on both sides of the divide.

Bukit Gasing has an unsung hero, Derek Fernandez, who will not hesitate to fight against injustice disregard of partisan stand. He may be a good friend of Khalid Ibrahim. He may be a strong supporter of Pakatan. He may be a councillor. He was the number 1 enemy of MPPJ. All this will not prevent him to fight for change. We need a good guy like him to fight for us, for real change.

Good to hear that the residents are getting a say in this matter. But the Sivan temple up the hill is still in limbo and it has been 5 years contruction has been halted. What is the MIC doing about this? For 5 years, many Indians have been waiting for their temple to re-open again. For years people have been going to the temple but now, the project is still in limbo. How long will this go on? If there is an approval issue, it has to be sorted out asap to enable residents to have their place of worship… Read more »

Well done, and keep it up!

This time the courts were with them (as they should be) but this instance is few and far in between.

I have always thought that residents nearby have always been given short shrift in the consultation process. Approvals and what nots are already given before we even know what’s going on.