At least we know one submarine works – but it doesn’t answer a host of other questions. 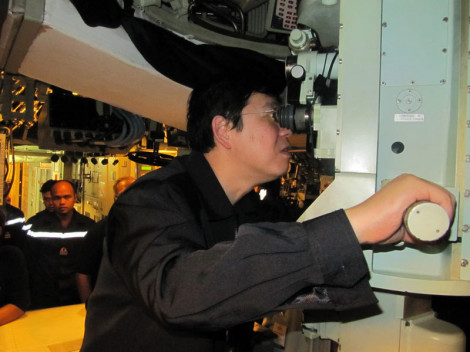 What about the other submarine, the KD Tunku Abdul Rahman, which suffered a technical defect that prevented it from diving for three months? The problem was reportedly fixed later (Malay Mail).

Is the Straits of Malacca deep enough for submarines to dive? Apparently, a German submarine was sunk off Penang Island during the War and the wreckage site is marked by a buoy.

It is a little known fact that Penang served as a German U-boat base in the Far East. U-511, under the command of Kptlt. Fritz Schneewind, arrived in Penang, then under Japanese occupation in July 1943, followed by U-178 in August 1943 [5]. This essentially started the U-boat campaign in the Indian Ocean and also provided the Germans with penetration into the Pacific for the first time, alongside their ally, Japan. Korvettenkapitän Wilhelm Dommes became the first commander of the U-boat base, located in the former British seaplane base in Penang

And can we have a full accounting of the amount paid to Perimekar for support services or whatever you want to call it?

Finally, do we really need such costly submarines?

How can you trust Zahid? He hasn’t only lied to LGE about Papagomo’s presence on board KD Tun Razak Scorpene submarin, He had earlier promise the Penang Chief Minister that he would accompany the latter for the ride, but reneged on the promise last minute. Zahid had even told reporters that no bloggers were on board claiming that “If we allowed any blogger to go, others would ask, too”. However Papagomo’s blogpost with pictures has proven beyond doubt that Zahid is not only untrustworthy, Papagomo is the numero uno Umno blogger, hatchetman and special advisor to the Defence Minister, or… Read more »

Pakatan people always have short memory, short of ideas and lack of vision. How can we vote for you?
Thank god it’s barisan as government, if we left PR to rule (prior to all the development projects and the even before the arrival of the “internet”), we would still be like Timor Leste. Sheeesh,, Thank god it’s Barisan.

Andrew I
Reply to  Pantai Dalam

Why not compare with Singapore, Thailand, S. Korea? Maybe after 53 years under PR we can compare, ok?

I suppose I have to agree UMNO 2011 appears to have a Vi$$$ion.
Malay$ia is theirs to plunder

Knowing some World War II history can help explain why the Malaysian government spending vast amounts of money on the two submarines is such a huge waste of national resources. The geography of the sea-bed, of course, has not changed in the 60 years since. British and American submarines were highly successful in destroying Japanese shipping in WWII, and they mostly operated in the deep waters of the Andaman Sea , hundreds of miles to the North-West of Penang and Langkawi. There is also some deep sea to the north and north-east of Sabah. Almost all the seas surrounding Malaysia,… Read more »

The submarine should be left in langkawi as a tourist ride to recoup the money spent.

I believed even after 3 generation, the money can still not be recouped

By then (after 3 generations) it will be towed to India to be stripped down to the bolts and sold as scrap metals in Kerala back lanes.
What a way of spending on depreciating toy value even at a cost of a human life!

PSSST…AGUAN AA…SEE ANY DAP MEMBERS PLANNING TO JUMP OVER TO OTHER SITE?

Last Christmas celebrations for “the frogs” before being toppled by Rakyat Spring ?

Did I hear someone ask “do we really need such costly submarines”? Tan Sri Abdul Aziz Jaafar, Royal Malaysian Navy chief admiral , thinks we need not just a miserable, albeit mighty costly, two. He stated that the “RMN plans to have a fleet of six submarines”. And according to him, the two Scorpenes have been doing a lot of good. They “helped complete hydrographic and nautical charts of the country’s coastline”… and “the process could be expedited and completed as the submarines were equipped with a sophisticated sonar system, among others.” See: Submarines help chart waters, says Navy chief… Read more »

Did I hear someone ask “do we really need such costly submarines”? Tan Sri Abdul Aziz Jaafar, Royal Malaysian Navy chief admiral , thinks we need not just a miserable, albeit mighty costly, two. He stated that the “RMN plans to have a fleet of six submarines”. And according to him, the two Scorpenes have been doing a lot of good. They “helped complete hydrographic and nautical charts of the country’s coastline”… and “the process could be expedited and completed as the submarines were equipped with a sophisticated sonar system, among others.” See: Submarines help chart waters, says Navy chief… Read more »

U mean it requires a submerged ship to chart the seabed levels better than a floating ship? Or the submerged ship needs help than those rescuers know how deep are the waters?

Umno blogger papagomo was onboard to provide coverage for Utusan and TV3.

As the late Altantuya was involved in the purchase of the subs, it is quite evident that anyone can have access to military deals and hardware. So this umno blogger being given a special pass to go for a taxpayer-funded dive is only proof that our uniformed custodians of national security will do anything for whoever looks after their interests.

Oh, sulking baby got his trip for free !!! He must be very happy now.

This is what I love about no one coalition having 2/3 majority. Everything becomes more transparent through the telescope. Just the question of cost now. Gherkin, your frustration is showing. No more doing what you like.

Another five years of the same checks and balances, please people. No need to kick anyone out. This is called a slow roast. Enjoy the aroma, everyone.

Its is 21 months later but then it does not absolve Zahid of a host of question and answer. But there is one baby who keep sulking. I am a loyal wannabe, how could you not let me try first.

No one knows the FUTURE. If that one sad day comes when Malaysia is being caught in a WAR, the first 3 … running into a submarine to hide will be the THEVA, DEVAN & TUNGLANG.

Who needs to be a hero a sinking submarine of sinking mentality and sinking financial future?
Belum Rainforest is still my best bet for survival, comes what may.
Time for Kopi-O kau kau Orang Kampung, a beverage accessible even within reach of Belum and worth my value for money many folds over than a non-performing sinking toy of the leeching regimes.

LGE, what Malaysia’s future did you see thro’ the periscope?

LGE is thinking of the following:

1) Why is the cost of the submarine much higher than market price?

2) Why did the government pay more than RM500 million to a newly-registered company, Perimekar, for consultancy when it obviously did not have any expertise in submarine or marine matters.

3) Why Altantuya Shaariibuu, who claimed involvement in the deal, was murdered and blown into pieces.

Submarine & Ostrich have one thing in common = go under.
One wholly sinks the country into beggar state sooner.
The other’s head went under ground oblivion to the dire straits in Penang.
Why Malaysia needs a submarine? To peep and at political blackmailing mermaids?
Enjoy this Ah Kong’s Money for Nothing:

more like Najib & gang are hunting for “red october” with the submarine ?

more like Najib & gang are hunting for “red october” with the submarine ?
More like pursuing red herrings 2.0 in Sodom-Me Theme Park or propagate ‘Hee’ frogs in Perak River mouth!

1st of all, why our country need a submarine, whether it works @ not 2nd issue? why do we need it? its the deal that the gov wanted!

The submarines were purchased just for filling up (certain parties’) pockets!!!!