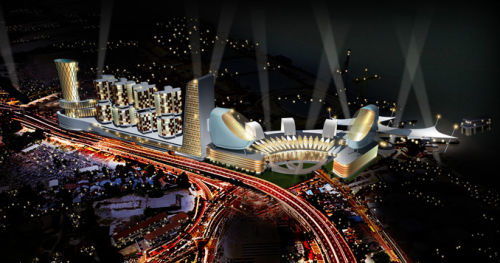 The proposed RM2 billion terminal – but not enough funds for public transport? (Image from penangsentral.com.my)

Here’s some food for thought.

Did you know that EPF is somehow associated with Penang Sentral?

Note 47 of the EPF Annual Report for 2007 shows a list of the EPF’s associated companies. Among them is Penang Sentral Sdn Bhd and it shows that the EPF has an effective equity interest of 100 per cent.

The principal activities of the firm are described as “pre-operating”.

It was reported last June that the RM2 billion Penang Sentral transport hub would be jointly developed by Pelaburan Hartanah Bumiputera Berhad and MRCB. The mega project was scheduled to be completed in 2015.

The EPF also has an equity stake in a few other MRCB companies.

thats a massive terminal up there in penang? KL still has Puduraya beside the failed Plaza Rakyat project!

how about scrips in a company to develop land in mongolia?

thats life under BN. they will milk the cows dry, one way or another.

I think by having Penang Sentral, it will encourage economic growth in Penang.

But why do they need such an expensive and huge Penang Sentral, when there are only a handful of trains arriving every day and the ferry service operates at only half the frequency compared to the 1970s?

It is an golden opportunity for EPF to be involved in this futuristic project to revive the Butterworth Town Ferry Terminal in Penang State into an envy Commercial Transport & Communication Hub of the State in the Northern region of Malaysia. Syabas to EPF and hope to see that the proposed project will be implemented soon during this economic downturn to help stimulate the economic activities for the benefit of the State.

I somehow like the idea of its link to Penang Sentral. Trust the gov on this, i’m sure this linkage is for a good use. When the Nation’s economy got problem, i think its the duty of its ppl to help; hence the EPF link to help Penang Sentral should be seen as a patriotic act. So support it.

I opted for the pension scheme with the government last month. I was with the EPF for the last 20 years. Looks like I made the right decision and hope to get my cash out from EPF the soonest.

There goes my retirement fund.

Don’t you know there are brilliant minds in EPF, minds equivalent to even the mind of Warren Buffet, who are managing our money in EPF.