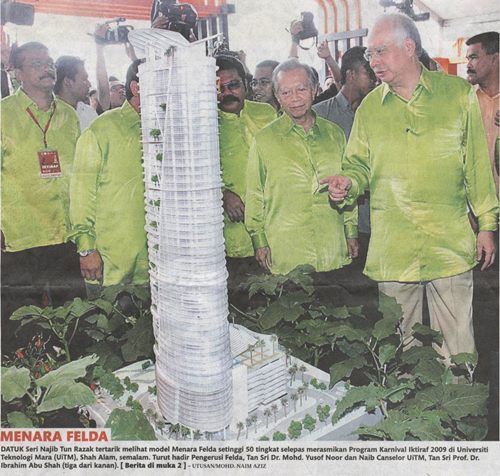 The agreement to buy Menara Felda at the Platinum Park Site, Jln Stonor, KL, for RM641 million was signed in 2008 and the building was reportedly expected to be completed in four years (2012). Has the full payment for the building be made now? When will the building be ready?

Felda’s cash reserves have dropped by RM2.7 billion in five years. This was explained as follows:

Ahmad admitted that cash reserves had gone down by RM2.4 billion (not RM2.7 billion?) while the assets has gone up by RM6.2 billion (Is this rise due to revaluation of land and buildings or due to actual assets acquired?)

This information is of course incomplete to draw any conclusions. It leaves many questions unanswered.

The office tower to be called Menara Felda is the tallest of seven towers in TTDI Development’s RM3.5bil Platinum Park, in Kuala Lumpur City Centre (KLCC). Construction will start this year and is scheduled for completion in four years.

The Felda accounts should be made public as this is a matter of public interest. A thorough independent audit is also required.

Don’t worry….God is watching…and the time for BN to be buried … in the next GE is very very near . BN is the so despicable that there is no correct or proper word to describe.

See how the Penan suffer and look at Taib. Can we afford another term for them.. Kick them out next GE

BN government there will stay until a better alternative arrived. So far, BN is the best available for us.

Other mosquito entities are not up to standard !!!

These and many are 52 years of corruptible, deceits and true lies from the UMNO BN & najib government. Make sure we kick them out next GE

Like all other classified information the government has the unreserved right to make it known only on a need to known basis.

I see a parallel in Felda and Petronas in terms of being cash rich and profitable, which made it possible to perpetuate intentional extravagance and wastages which benefited certain people at the expense of the rest. It is too simplistic to take the cash position in one year and that of a later year and take the difference as depletion of cash. As Husam has mentioned, there were profits during those years which should be accounted for when working this out. End of the day, I can foresee it boiled down to unwise or intentional decisions to profit certain individuals.… Read more »

It is not enough just to let rakyat know the asset is valued at RM6.2billion, we need to know what are components used as asset in Felda and what is the current and long-term liability of Felda? Felda can go and acquire bunch of fixed assets through borrowing or using other complex financial instruments to cloud the asset figures. We really need to see the accounts!

The Power that Be stripped Felda of its cash reserve so that when the eventual listing (public offering of shares) takes place, it becomes a ‘sick cow’ instead of ‘cash cow’.

Just see how profitable are the major plantation companies in Malaysia…Sime Plantation Division, United Plantations, IOI Corp, KL Kepong, TH Plantation just to name a few…compare their past 5 years with FELDA…’it’s like comparing an ‘apple with mata kucing’