Much has been said about the controversial award of a record 60-year concession for the proposed RM7bn West Coast Expressway. But who actually owns the concessionaire?

The concessionaire for the 316km expressway from Banting to Taiping is West Coast Expressway Sdn Bhd. It received an approval letter dated 26 January 2012 from the Public Private Partnership Unit of the Prime Minister’s Department to undertake the highway construction.

Now, we know that West Coast Expressway Sdn Bhd is a 64.2 per cent subsidiary of Kumpulan Europlus Bhd. But who owns the remainder of the shares in WCE?

A company search of WCE reveals the following: 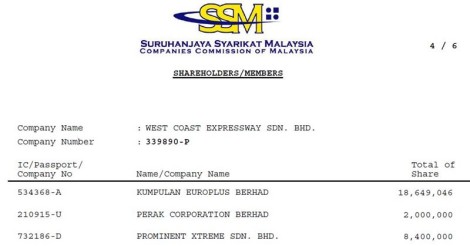 We know that Kumpulan Europlus is jointly controlled by Chan Ah Chye and IJM Corp Bhd. Chan is also on the board of the controversial housing developer Talam Corporation Bhd.

But what about the other two shareholders of WCE i.e. Perak Corporation Bhd (2m shares) and Prominent Xtreme Sdn Bhd (8.4m shares)?

According to the 2010 Annual Report of Perak Corporation, its substantial shareholders are Perbadanan Kemajuan Negeri Perak and Sime Darby Property Berhad.

That leaves us with Prominent Xtreme Sdn Bhd, an oxymoron – for it is hardly an extremely prominent company. In fact, you could say it is extremely obscure. So obscure that a company search reveals that it is ‘dormant’! Its revenue for the year ended 30 June 2010 added up to the princely sum of RM3843 (though it has assets and liabilities each side totalling RM20.8m). 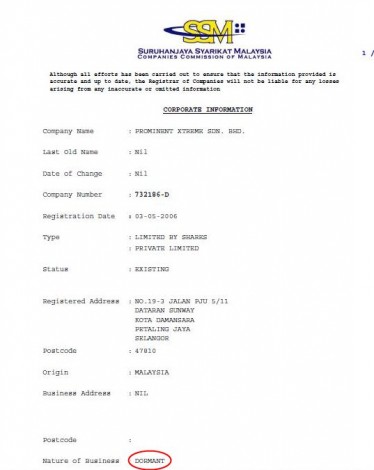 Now who are the shareholders of the obscure Prominent Xtreme, which owns 8.4m shares in West Coast Expressway Sdn Bhd? Not surprisingly, they are equally obscure names. 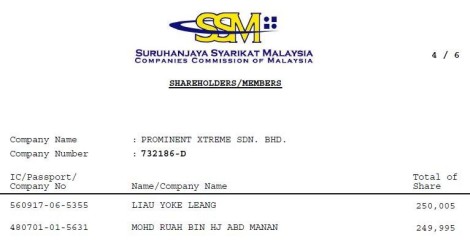 You won’t find much on them if you search their names online. Needless to say, there’s no website or telephone contact details for Prominent Xtreme.

I tried to find out who or what exactly was at Prominent Xtreme’s registered address at Jalan PJU 5/11. My enquiries revealed that only two firms are possibly at that address: a real estate firm and a company secretarial firm.

Another mystery: according to a circular to shareholders dated 6 May 2011, Perak Corporation had entered into a Conditional Share Sale and Purchase Agreement with Prominent Xtreme Sdn Bhd on 22 October 2010 to dispose of its entire equity interest in WCE, comprising 3.31m shares of RM1 each (representing 12 per cent of the issued and paid up share capital of WCE) for RM4m, which was fully paid on 21 March 2011.

But according to the company search of Prominent Xtreme, Perak Corporation still had 2m shares in WCE.

The government should clarify how a ‘dormant’ company can hold a 29 per cent stake in a concessionaire that is supposed to build a RM7bn expressway. Who exactly is behind this extremely obscure Prominent Xtreme?

Hi Anil, You will just be looking for shadows ! The register address at Jalan PJU 5/11 is probably just a Secretarial Service Address. Prominent Xtreme is probably a nominee company that is registered in the dozens by either Larut , Talam or Brisdale ( before PKNS took over majority shareholdings in mid 90s ). Chan Ah Chye was the controlling shareholders of the above companies then ! In the 90s, Acrocon was a major main contractor of Larut/Talam, building terrace houses and apartments at Pandan Jaya, Pandan Indah and Pandan Perdana – the so call Pandan Triangle . They… Read more »

Well done, Anil and all who delved and dug up yet another empty sardine can full of fat wriggling worms!

The major shareholder of Agrocon is the brother of Talam’s boss Chan Ah Chye.

A Fred Liau was senior general manager of Agrocon in 2007:

Anil,
You should change the title to “Dormant’ firm with virtual office holds stake in RM7bn expressway”

If any of you are around the area, could you drop by and check out the address?

I went to check the place. It is only a SOHO office providing virtual office, company registration and tuition services. That means the dormant firm only has a virtual office.

Did a bit of a google…. Mohd Ruah was a civil servant.. whereas Liau could it be Fred Liau who is heading a small developer, Agocon Sdn Bhd wit its office in Pandan, KL?

A Mohd Ruah is also the name of director of a small-time contractor firm:
http://www.cidb.gov.my/directory/local_contractor_details.php?cont_id=137623

A Mohd Ruah is also listed as a former lance corporal who received an honorific award in 1988;
http://www.istiadat.gov.my/v5/images/stories/1988.pdf

Not sure if these are referring to the same person.

“108. Liau Yoke Leang, Fred”
is listed as a member of the Malaysian Institute of Management

Let me find out the company at PJU5/11, just walking distant from my office ;->

Mr.Anil, In malaysia ,anything that is done by the powers that does not surprise anyone. One and only verdict is to banish BN to the back waters they duly belong. When PR takes over in the next GE, The first thing they must do is to go back 20 years in time and investigate how the country’s finances and project were managed. If the slightest proof of mismanagement is found, then whosoever was responsible must be charged in a reformed judiciary and locked up ,the keys must be thrown at the lynas dumpsite.All illgotten gains must be recovered. God have… Read more »