The other day, I visited a relative in a general hospital.

I was shocked to see how crammed the conditions are. In the ward section he was in, as well as in other nearby sections, a space originally meant for three beds on either side now had five beds on each of the two sides. 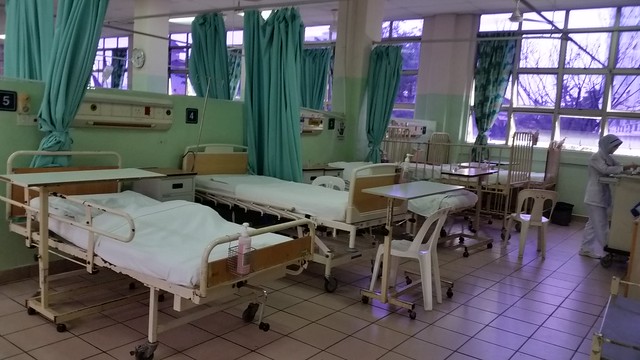 The middle space, which was meant to be an open space, had another two to four beds.

In other words, a section originally meant for six beds, (you can count the number of bed head panels nailed to the wall) now had 12-14 beds (see photo at top). Similar conditions can be found in some of our other general hospitals.

Why do patients have to be crammed in overcrowded government hospitals? Is it because our country lacks funds to provide adequate social amenities for everyone? I don’t think so.

We are supposed to be a resource-rich nation. But, we are unable to hang on to our doctors and specialists in the public sector or provide space for in-patients.

This is not a problem confined to Malaysia. Of late, we have seen how money has been transferred around the world and stashed abroad.

The Panama Papers provide a startling glimpse: a stash of 11.5m confidential documents about what was being hoarded in 214,000 offshore companies was leaked to the media.

These documents are revealing, as they provide an insight into how the rich, including several heads of state and government leaders, hide their money abroad.

Now, much of the money may have been acquired and then transferred abroad legally. But some of it could be money from shell companies or acquired from illegal activities, like drug trafficking or, simply stashed abroad to evade tax.

But less attention is given to tax avoidance, which is usually done with the help of tax accountants and specialists who give advice on the different kinds of tax incentives available and options a person or firm can use to reduce tax liability.

For an individual, sometimes, this could mean setting up a company to reduce the amount of tax paid or, it could mean spouses opting to have separate or joint income tax declarations.

Now, tax avoidance may be legal, but if those earning large incomes end up paying small amounts of tax, then there is something seriously and morally wrong with the system. Throw in an unjust distribution of national income and a regressive tax such as the GST, and you will find a system weighted in favour of the wealthy.

In the case of 1MDB, major questions remain about how public money and public land was used by this outfit. Public land was sold cheaply to 1MDB which, in turn, sold or revalued it at market price.

This is a loss of billions of ringgit in public money which could have gone to public coffers, had the government held on to the land. Given that the audited accounts for the year ended 31 March 2015 are still not ready and the auditor general’s report has been classified, questions about 1MDB’s massive investments and international transfers of funds have not yet been answered.

Speaking of the cases of 1MDB and Brazil’s Petrobas, Mark Branson of Finma, Switzerland’s independent financial markets regulator, had this to say:

“The extent of the cases, and the sums involved, are vast. We are talking about cash flows amounting to several billion US dollars, with individual transactions running into hundreds of millions. Those are significant sums of money for developing nations like Malaysia and Brazil, in which the average monthly income is less than US$1,000.”

The Bishop of Rome, Francis, is all too aware of the global reality. He has said that scripture demands that we work towards an economic system that caters to the needs of the poor and the excluded. “In the case of global political and economic organisation, much more needs to be achieved, since an important part of humanity does not share in the benefits of progress and is, in fact, relegated to the status of second-class citizens,” he once said.

Francis drew a parallel with the Gospel account of Zacchaeus, a tax collector who profited from an unjust economic and taxation system while leaving the multitude of hardworking taxpayers in misery (Luke 19:1-10). Zacchaeus was so touched by Jesus’ words that he was stirred to commit himself to giving half his possessions to the poor and to repay anyone he had defrauded four times the amount.

Today, it is not individual tax collectors who need to be reformed. The entire national and global financial architecture needs to be shaken up to remove tax havens for ill-gotten gains (a huge bulk of these gains perhaps skimmed off public funds).

We have to ensure that public money is channelled to those who most need it and not siphoned away. This way, we can change the current reality of patients having to be crammed into overcrowded hospitals and the poor denied the opportunities to live life to the fullest.

This article was first published in The Catholic Herald.

eveey buy election and state election armno gomen throw goodies and promises if they rlect they will get more funding. of course money will be diverted to them even if in umno sttonghold.

A couple of comments: 1) Intellectual victory of neoliberalism over Keynesianism (and the idea of the Welfare State) starting from the late 1970s till today. We are seeing the consequences in terms of public policy and the effects on ordinary people. Deregulation of the banking industry is linked to the scandals exposed by the Panama Papers. 2) Our 1Malaysia regime is spending all its time trying to pony up enough money to pay off the creditors (e.g. selling off the family silver to China), and on propaganda to mollify the increasingly upset citizenry. 3) 1Malaysia ruling class politicians increasingly sound… Read more »

What is the “international system” that needs reform? First, the ultra-rich, who do not appear on any list of billionaries, control governments. Second, the champions of democracy, who will attack your economy or invade you under flimsy ecuses have been dragging their feet over “offshore banks” and “tax havens.” This includes Labuan and squeaky clean Singkapoh. These champions want to “grease” their business and obey their masters. The total wealth hidden and laundered was about $21-32 trillion a few years ago. Third, Bolehland is a world leader, ranking no. 5, in illicit outflow of wealth. GFI says the total was… Read more »

Nowadays, money is tight & harder to stretch more than an inch. Private hospitals (the ‘hotels of recuperation’ & bin chui display of medical lifestyle – to some it’s highly fashionable to just pop into one with an insurance medi-card at a moment of head ache) is becoming more & more beyond the reach of many. Many of the middle class have resorted to send their sick ones to the Pg GH where treatments & medicines are at minute costs compared to profiteering private hospitals, no thanks to medical tourism expounded sky high, thus the sky-high fees of surrealism. Before… Read more »

Public money? Our country rich in resouses for us?
No such thing.
rajraman.Its belong to Political Traders once they are at the helm of power.They decide how to spend for us and they decide who get our tax payer money.
Voters comes first when election comes and the same voters comes last in their list when comes to welfare after winning the election.
Some buy new plane and some buy at discounted price.When question them some will ask to watch movies.

Malaysian PM Najib Razak’s close associate Jho Low played a key role in transactions at the state-run fund 1Malaysia Development Berhad and netted hundreds of millions of dollars, the Wall Street Journal reported Monday, citing investigators. 1MDB has been marred by a corruption scandal involving Najib. About $1 billion meant for a joint venture with PetroSaudi International Ltd. – an oil company partly run by a Saudi prince – and the Malaysian fund ended up in a bank account of Good Star Ltd., a company set up by Low and registered in the Seychelles, a person familiar with 1MDB dealings… Read more »

No wonder our country hospital no $$$.
All sapu and donated to foreign country for glamour.

Looking at the above pics, I assume it must be Ward C (of the older wing) of GH (near the Residency Road). Way back in the 90s, GH’s 3rd Class? Ward C was quite spacious where one could lay a foldable deck chair for an overnight stay with one’s relative patient. And occasional there would be an empty bed or two or more nearby (the Chinese has a pantan not to sleep on one of these empty beds but rough out on a deck chair if one has an over night duty to look after a relative). I remember in… Read more »

Somehow some rakyat that have not awaken have to go through the pain to realise the need for UBAH.

Nowadays government clinics restrict dispensing many types of medicines, and simply give Paracementol aka Panadol as easier or cheaper option to save cost???

Only because of hardship caused by barang naik phenomena that some rakyat can finally able to think rationally who to trust!

Panadol is dispensed to ease the pain of Barang Naik?