Some 300 people packed a hall in Penang this afternoon for a Malaysians for Beng Hock forum organised by civil society groups. 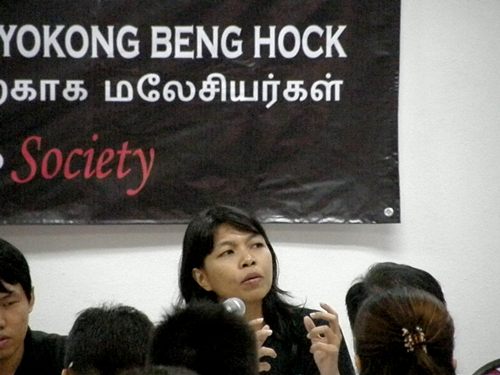 Aliran president P Ramakrishnan called for the Beng Hock inquest to be disbanded and replaced with a royal commission of inquiry.

“If you want real change, then change the government,” he asserted, at which the crowd erupted in thunderous applause.

The other speakers were Beng Hock’s sister, Teoh Lee Lan (via recorded video) and Toh Kin Woon.  The forum, moderated by Ng Eng Kiat of Suaram, was held at a hall in the Han Chiang School.

Gelak k, you know, your ah boy, Dr Koh already said sorry and apologised to the penang people for failing them…

anyway, i would still want to say, Malaysians as a whole and in particular, the Penang people are all very bodoh la as it took them almost 2 decades to realise …

KTK admitted (for the first time) there are many, many things he should have done, many shortcomings he regretted, so he has to apologize to Penangites. But he said he cannot reveal them now!!! Why???
Gerakan K, are you ready to hear them all?
Just do us a favour. Cajole him to reveal them without fear or favour.
He is a local boy, you know?

What are you talking about ???

KTK still is the Cabinet minister and the President of Gerakan.

If your feel that the state government giving away free money is the indicator of good government then you will certainly free sorry when there is no more free money around.

“Instant noodle” tactic won’t last for a long time and in the end of day you will find the regime actually did nothing for the whole session of governing.

Gerakan K, At least they did better than Gerakan. As always you were always wishing for benefits by being wannabe ….

Yo people! Ignore that Gerakan K fella. No use feeding him your anger, for we got better things to do.
The sentiments of the crowd at the forum was one of unity, the unity for want of change, and that is to (if I may quote Aliran’s president’s words)”change this rotten government!” Simple and straight to the point!

Let’s change the Penang government and pick a local boy as the CM !!!

It does matter whether he is a local boy or not as long as he does the job. Surely we don`t want a zero KPI CM . He has confirmed it himself that he is not competent and good enough by apologizing to the people. Beside lack of competency and failing the people, the worse part is that he continue to submit himself to his master UMNO.

Actually you know what? You are right. He’s doing such a good job making people hate and think Gerakan and the ruling federal government are a bunch of numb skulls so much so that I think he might actually be a PR agent….LOL

Yeah, Zaid maybe the UMNO agent too and he is contesting for deputy President of the party !!!

Umm, is he making people hate PR? Because if he is, I don’t think he’s a good UMNO agent then. I would say you are the better PR agent. Don’t worry, you are still the best :).

300 People of all races. So touching and I feel guilty for not going. I did give more money though..

HOW CAN RAKYAT IN THE MILLIONS LOSE TO THE FEW THOUSAND CROOKS ? PEOPLE USE TO SAY POWER = MONEY, THE WORST THE POWER KEEP THE MONEY AND RAKYAT VOTED FOR THEM ALSO SUFFER IN DAILY LIFE. WHERE GOT LOGIC ?
WHO’S STUPID LAH ? TO PROTECT THE FEW AND SACRIFICE THE RAKYAT. OBEY THE UNIVERSAL LAW. VOTE FOR CHANGE THAT WE BELIEVE IN. THERE’S NO OPTION. VOTE PR IN PR13.

I am very ashamed to confess that i didnt attend as something popped up, so i could not make it… Anil, how was the attendance? What Danny Lo said in his comments are very true… Mr PM himself said he wanted back Selangor by all means… and (then) Beng Hock lost his life just like that, his parents lost their beloved son, Lee Lan and her siblings lost a good brother, an unborn baby lost his father and Beng Hock’s fiancee, a young woman with so much to look forward to has now become a widow… Same thing exactly happened… Read more »

“Forgotten” is a very light and polite word to solve a criminal offense!… (f he was killed), the murderous culprits must be made answerable and charged…preferably, put away in cages!
Geakan K, it is rightly that the public cries for justice because we have a immoral … UMNO-led govt. To you, a shameless cherry picker, your conscience does not prick you!

How dare you said “murder” when most of the pathologists made the conclusion as of suicide case rather than homicide ???

Beng Hock death in MACC because (someone) wants to bring down the Selangor State Government. Else how can you explain a witness death for a RM2,400 case and there is no action against Khir Toyo, who lived in a RM 24 million palace?

Speak up we must.
Our lives are at stake if criminal acts can go unpunished, hidden from the reach of the laws. Worst still the suspected acts happened in the vicinities of law enforcement agencies. What excuse to say this is political?

Did your mother say: Don’t trust the polis/MACC more than you can trust a stranger?

This is political event that organized by PR supporters.

Beng Hock name being used by these people for personal agenda.

Gerakan K, dunggo, these people are not from political parties but from NGO who like Anil in his blog are fighting for truth and justice that have been absent from the current government under UMNO and Najib.

Based on your logic, Perkasa also an NGO without personal agenda !!!

What are you blabbering on about? NGO’s have their own agenda? Well duh. All of them have their own objective, whether it is to fight for justice, or equality, or ketuanan melayu, or Saya Anak Bangsa Malaysia. Just like how you have your own agenda posting here too. And saying change the government doesn’t make it a political thing. 2 things: 1) When there is no other option, and the government doesn’t seem to be administering justice, what did you expect people to say? You expect them to gather around a campfire and sing kumbaya for kerajan Barisan Nasional ke?… Read more »

Thanks for confirming that they are PR supporters with personal agenda, ie bad mouthing BN government.

WOW, so Gerakan people actually can’t read and understand English. No wonder they got booted out, they were … stupid.

Yeah. And PR thanks you for doing a great job making people hate Gerakan and BN. Well done Gerakan K.

Continue doing what you do and embarrass BN some more. Using a political parties name as a your nick, brilliant idea I must add.

Like so many deaths in Malaysia Polis Custody they seem to go unnoticed after some time- this is what the Authorities hope,and the Officers who tortured and beat Detainees know, they can get away with such dastardly and evil acts. We as a Nation cannot and must not remain silent or else we are equally as quilty for the deaths of so many like Kugan, Beng Hock, K.Kannan Yogeswaran, Kumar Krishnasamy,A .Gnanaprasagam,the bodies found in Klang river and elsewhere and the many many who have perished whilst in custody. Are our Ministers too busy with business deals and wealth accumulation… Read more »