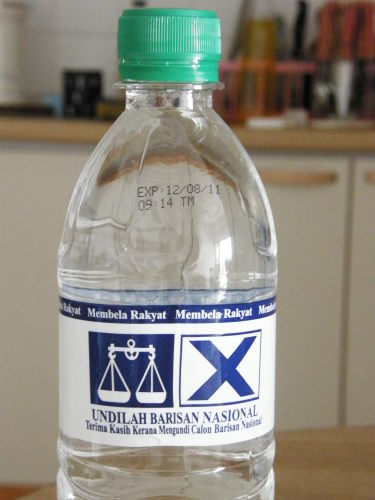 Fancy a drink, anyone? Expiry date: 12 Aug 2011 (I am not sure if that refers to the shelf-life of the water or the BN’s expiry date. Anyway, I hope the drinking water suppliers get paid!)

You meet the most unexpected people when you go ceramah hunting. The media people are the most avid ceramah followers, trailing the elusive candidates wherever they go.

You also bump into fellow bloggers and internet journalists like I did on Tuesday night, when I ran into bloggers Mustafa K Anuar and Susan Loone, a journalist from Merdeka Review and the new kids on the block from The Nutgraph. It was my privilege to buy them a round of teh tarik, milo kosong, and air bandung. If not for them, your only news from the by-election campaign would be from the mainstream media. I also have to thank a particular mainstream news editor – who shall not be named! – for providing me info on how to get to the latest ceramah and for updating me on developments that I may have missed. There are a few good people in the mainstream media, with their hearts in the right place. It’s just that they are often not given the freedom to write what they believe in – thanks to their top editors. That must change – the sooner the better. Anyway, you can see us having drinks here.

We even got to see “UFOs” in the night sky hovering over the ceramah site between Bandar Perda and Bukit Mertajam. These “UFOs” seem to be particularly curious about the earthlings here who have been swarming the PKR ceramah. This particular ceramah was attended by a crowd of about 4,000.

Among the speakers were Saifudin of PKR, Mahfuz of Pas, an “NGO” rep and Anwar. By now, we more or less know what Anwar has to say. (This time though he told Najib not to talk so much about sodomy and personal integrity and all that; otherwise he would ask him about “Port Dickson”!). Mahfuz exposed how much Abdullah’s Raya open house costs each year. For 2003, he claimed the expenditure was RM3.5 million and for 2004-2007, he alleged that the cost of holding the event at the PWTC was RM4.92 million every year! That’s a lot of food – and money! Well, at least it goes to feeding all those hungry Malaysians…

That said, the PKR folk must be more careful about the type of local speakers they get to address the ceramah. The “NGO” speaker who addressed the crowd on Tuesday night had some awful reactionary views. In addressing the UiTM issue, he referred to the non-bumis as “bangsa asing“. I wonder how such exclusivist talk went down with the non-Malays in the largely Malay crowd.

This particular “NGO” chap also appeared to have some xenophobic views as he warned about about the influx of “pendatang tanpa izin” (undocumented migrants). Somehow he also managed to associate this with the increase in the crime rate as he began talking about how criminals were even hauling off ATM machines. Someone should tell him that migrant workers account for only 2 per cent of crimes in the country even though they make up more than 10 per cent of the population. Please, PKR, screen your local speakers more carefully. We don’t need reactionary views like these – not at a time when many are hoping for a more compassionate, inclusivist and progressive Malaysia.

One thing good about the PKR ceramah is that they seem to be providing a huge captive market for a whole range of small traders who sell everything from VCDs of political speeches to religious items, food and beverages, head-bands and unidentified objects that glow colourfully in the dark. And the crowd here actually buys the stuff (so unlike the small BN ceramah). I think many of them actually want to support these traders – instead of patronising stalls elsewhere – out of some sense of political camaraderie. It’s a blessing for these small traders who would otherwise be going through some tough times in the present difficult economic climate.

I even saw an interesting Islamic genealogy scroll chart on sale. This particular chart traces the descendants of Adam and Eve all the way through Noah, Abraham, and Ismail down to Muhammad as well as from Isaac, Moses and David down to Mary, Joseph and Jesus. All in one handy scroll that you can hang on the wall in your home – incredible! Now, doesn’t this show that Muslims and Christians (and Jews) share a common historical heritage? They are all the spiritual descendants of Abraham/Ibrahim. Remind me to take a photo of this chart next time. I would have snapped a couple of shots that night but I forgot to bring along my camera batteries!

oh well, the traders there made a good bugs. Once in a life time, how can they let monies fly away? 🙂

i can assure the malaysian public that 90 percent of indians will vote for dato seri anwar and all this free gift will only be free gifts and will not have any effect to the voters becouse we know what happend in the recent election…….makkal sakthi

hmmm i sense UMNO/BN sympathisers in jit on and mr mugam ….

One quick comment in reference to your statement ‘Please, PKR, screen your local speakers more carefully’. Various problems have confronted the PR and the PKR in particular over the past 5 months or so – and I am referring here to the cases of the (alleged) BN plant, Saifol, the various confrontations between ‘suspect’ PR/PKR ‘bouncers’ and members of the media, the over expressive’ behavior of the PR MP at the Bar Council Forum and of course your comments above on the ‘guest NGO’ speaker. I and I am sure many Malaysians that in the sudden rush of developments in… Read more »

khairy is causing more damage to umno in permatang pauh with his rhetoric. umno should pull him out immediately before ariff loses more votes. ariff claims to have a degree from a college and is pursuing his Phd from an (allegedly) dubious institution. a check with the ministry of education and the website (indicates that this could be all) dubious. why must a desperate politician claim that he has such qualifications. why can’t he be a humble man like our late ghaffar baba who hid nothing about his educational background? the people in permatang pauh are talking about this …… Read more »

WE should not accuse them doing black magic in those waters. It is just for the relief of thirst for the voters and workers contribute their energy and efforts in the campaign. PR might be doing the same thing. But not enough financial to provide water drinks for the workers and voters by Anwar? That’s bulls***.

BN official drink Marketed by another crony company? Will it be paid or donated? As someone commented here Be careful of the BN bottled drinks Maybe Si-S—— had mixed it In the end every one drinks The mind and soul think of BN Life will be flowing like s***….. Seriously the voters have decided The person whom they want to give their votes The good son has finally returned The people in PP want him in August House And get his government moving Unshackled the rule and divide systems And the entrapment done by UMNO elites And the lapping ….… Read more »

Anil,
hope you dont drink the water.
Better u bring along your own boil water.

rajraman.warlords please pay the contractor,dont blame Barisan because u are the boss for your sidekick.Its haram also in Islam not to pay people….

Could it be Nuwater imported from
Singapore? Nuwater is “processed”
water that is also known as
“Jamban Juice” 🙂

Yes, quite. The sooner the better. Like Mr. ‘Democracy works in America because it is a homogenous society’ Wong Chun Wai.

I don’t believe this guys, who knows, they might get some voodoo fellows to do black magic (air pengasih) that controls heart and mind of voters. Better don’t take chance.

Don’t think I’m being superstitious but just being extra careful of those I don’t have faith.

hahahahahaha… i hope so too. so how many million this time from the rakyat money UMNO/BN must pay their crony contractor for the supply?