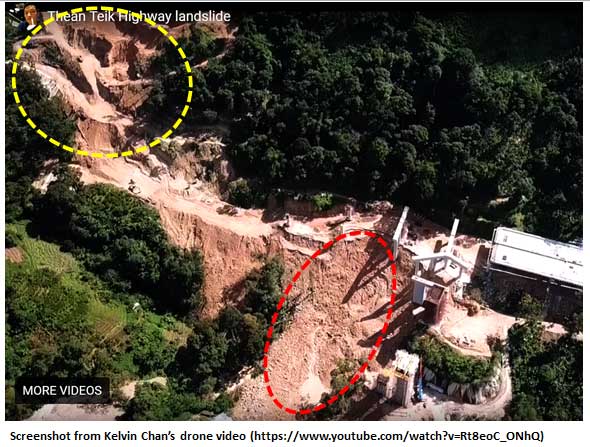 So what action is going to be taken against the MBPP? Is they can’t oversee or manage a small road project, what hope is there when they build the monster six-lane Pan Island Link project along and beneath the hill slopes of Penang.

And why isn’t investigation report being made public? Meanwhile, check out this CAP statement

The Consumers Association of Penang calls for stern action to be taken against the wrongdoers who have been found responsible for the fatal landslide tragedy at the construction site of the paired road project at Jalan Bukit Kukus on 17 October.

We welcome the investigative committee’s findings as to who is responsible for the tragedy. But we are concerned that – apart from recommending the blacklisting of the contractor, consultant and independent checking engineer from any tender consideration for future projects and pending further investigations by the police, the Department of Occupational Safety and Health and the Construction Industry Development Board – it appears that no further stern action has been recommended.

In particular, we want to know what action is going to be taken against MBPP for its failure to act by the Penang state government. It is incumbent on the state government to hold the MBPP mayor and the relevant officers accountable for their irresponsibility and dereliction of duties in failing to supervise the project.

This is no simple incident as nine deaths have resulted. Stern action must be taken against the MBPP including strong disciplinary action against the mayor and officers responsible.

Otherwise, it will be business-as-usual in the MBPP as the officers will be allowed to go scot-free with impunity. And nothing will be done to improve the standards of supervision and enforcement of the laws relating to earthworks, construction and buildings, for which this agency is responsible.

Safeguarding the public interest demands strong action against the MBPP and the other wrongdoers, who are responsible for the death of innocent lives. This tragedy must serve as a good lesson to prevent further incidents of such a nature.

We therefore call on the state government to make public what further action will be taken and what improvements will be done in the MBPP to prevent further landslide tragedies.

We also call for the investigative committee’s findings to be made public, in the interest of transparency and accountability.

SM Mohamed Idris is president of the Consumers Association of Penang.

PEKAN: Tasik Chini is facing the risk of losing its biosphere reserve status accorded by the United Nations Educational, Scientific and Cultural Organisation (Unesco) if land clearing and mining are allowed to continue extensively.