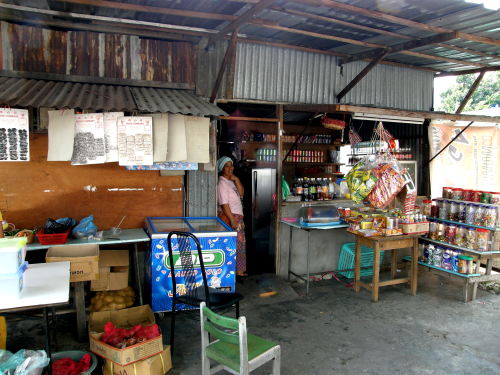 Change my lifestyle? Who me? – Urban poor in a kampong in Penang Island

Here they go again, telling you to change your life-style:

KUALA LUMPUR, Aug 29 (Bernama) — It is important for Malaysians to change their lifestyle to help bring down the consumption of non-renewable energy while measures are being implemented to alleviate the hardship arising from cost-push inflation, the Ministry of Finance (MOF) said.

I am not sure what the pakciks and makciks in the kampongs, long-houses, estates, orang asli settlements, low-cost flats and urban pioneer settlements will make of this. And let’s not forget the migrant workers crammed 20-to-a-house. They are certainly not the ones cruising the roads in their Mercs or BMWs and spending RM10 on a cup of latte.

Here’s a response from Justin Choo:

Makciks and Pakciks, kampongs and long houses, may be far away in the rural areas. You have not mentioned the retired people like me. No more active income. Some still got to feed grandchildren. I live a very, very simple lifestyle. No smoking, no drinking, no gambling, no womanising (too old lah, and also not rich!), always stay at home, eat small breakfast, and two simple meals a day, drive an old red “taxi” Proton Saga, and wear shorts and T-shirt, and slippers. What lifestyle to change? The only change is upgrade! Eat the most sumptious cuisine in fine-dining style? Savour fine wines and caviar, birdnest soup, abalone with scallops, baked lobsters drenched in the finest red wine. Fly to New York, Paris and London for shopping, etc…. How nice.

Let’s see the Ministers leading by example and dumping their petrol-guzzling cars, with all the escorts and outriders, and taking public transport everyday.

Some quick points from the Budget:

The Budget deficit has crept up to a worrying 4.8 per cent of GDP this year (2008) despite record high oil prices.

Now we are bracing for a global economic slowdown, triggered by what some economists are predicting could be the worst US recession since the Great Depression. Can we really achieve the forecasted budget deficit of 3.6 per cent next year? Isn’t that forecast a bit too optimistic?

We seen to be spending a lot on infrastructure (the hardware), but what about improving the skills and capabilities of workers (the software, so to speak)?

What exactly has been done to promote sustainable jobs?

How are we going to protect workers from possible retrenchment? Will there be a retrenchment fund to assist such workers?

What is our policy on reducing reliance on migrant workers? Shouldn’t we have a minimum wage?

The unofficial inflation rate is probably closer to 10 per cent. It is good that the government has increased the minimum pension, but this is not going to substantially improve the quality of life.

More concrete policies are needed to deal with the following key areas:

When I saw the allocation of RM475 million for agricultural inputs, fertilisers and pesticides to assist padi farmers, the first thought that came to mind was that it would benefit corporate agriculture, especially the agri-chemical suppliers and the agrobusiness firms.

Are there any allocations to promote sustainable (organic agriculture) and research into renewable energy such as solar energy?

While it is good that the eligibility income threshold for social welfare aid has been raised, many people are still receiving insufficient assistance. One MP told me there is not enough assistance for single mothers. He said there are many such cases in his constituency such as the one he encountered of a single mother with four children who had run out of money and simply couldn’t afford to feed them all. How does this Budget help people like them?

Shouldn’t we be revamping our social security system to make sure no one is left hungry or homeless or without a balanced diet?

How to change our lifestyle? By not working in a palatial office or live in a palatial mansion built with our tax money, or discard our foreign make car to make way for proton “junk”? He need to be specific on his statement.

households now owe as much as the entire U.S. economy can produce in a year

Don’t worry life will automatically change,when you don’t have money how can you survive without changing your lifestyle.

Changing of our lifestyle? How about getting the all the BN ministers to give up their monthly allowance and income and give it to all the charities in Malaysia? The innocent children and elderly need to have enough money to survive with the increase of food prices and electricity rates.

Dear Anil, Well what is new? Change our lifestyle, the same propaganda before and after the 12GE. I am neither an economist nor a political analyst, just wondering if the gormen were adressing the Budget Deficit? How about inflation or the continuous rising of cost of consumer good.I am not sure of reading anything about that. Why the sudden focus in East Malaysia now after it was neglected for a long time. No offence to the people there as you deserve the best not just crumbs. So I need to change my life style? I shall trade in my 13… Read more »

“I think AAB is trying to make peace with all the neglected people in Malaysia. What a moron…Why only now want to ease the life of SABAH n SARAWAK bumiputra..+ orang asli?”

Dear Anil, I think AAB is trying to make peace with all the neglected people in Malaysia. What a moron…Why only now want to ease the life of SABAH n SARAWAK bumiputra..+ orang asli? Just because they have same voting right of depleted suppoter of BN. This is totally broad day ….. ACA (please investigate). I forget ACA also get pay from BN Gomen. Why ACA now only do their jobs..catching small fries ( I prefer to terms its as plankton) not rumored big curropted fish… ………………………. No matter what gomen is doing now is too late to save BN..… Read more »

I know the most common advice is to spend prudently at times of economic downturn. Yes, change our lifestyle… But what if the Rakyat is already scrapping the floor for bread crumbs? What else is there to change? If the government is too dumb or sleepy to think of ways to kick start the economy AND everyone starts to spend less and less, the whole economy will shrink/collapse (negative GDP). Adding on to this, we have high inflation rate causing spiralling effect on all goods especially basic necessities. Negative GDP (or stagnant growth) + Inflation = Stagflation? Very soon we’ll… Read more »

if BN gomen are serious..
they should hv spelt out measures to curtail their own excesiveness…

Well what has changed with the budget, a mere sweetener to aplease some but where are the plans of price control or to overcome the budget deficit? What was mentioned about the current inflation rate? It may be more than 10% looking at the increase in price of goods or plans to attract foreign investors? I am not seeing anything what so ever but goodies being offerred to East Malaysia citing it has been long overlooked. I may not a political analyst but even a lay man would understand why? At the end I am not seeing any concrete plan… Read more »

Please do not change your lifestyle. BN MPs should change, dump BN and move to Pakatan Rakyat!

If i change my life style – cant event efford to put a comment in your blog.

rajraman.where to save,how to save i know but the warlords still dont know how to jump start the economy.(for their pockets lah)

What life style do they still want us to change????? We are already struggling to meet our daily basic need. They can do much more to help us like reducing foods and abolishing all toll in the city as it really cost alot to any ordinary family.

Anil, Makciks and Pakciks, kampongs and long houses, may be far away in the rural areas. You have not mentioned the retired people like me. No more active income. Some still got to feed grandchildren. I live a very very simple lifestyle. No smoking, no drinking, no gambling, no womanizing (too old lah, and also not rich!), always stay at home, eat small breakfast, and two simple meals a day, drive an old red “taxi” Proton Saga, and wear shorts and t-shirt, and slippers. What lifestyle to change? The only change is upgrade! Eat the most sumptious cuisine in fine-dining… Read more »

What lifesyle lah? Few weeks ago, i saw one guy bought ‘sotong basah’ for RM3 at Kamunting wet market. I’m sure there are many others like this guy. Pity to them and their families….

as a perakian, sad to say i haven’t seen tajol’s wife until today. don’t know why lah. maybe she’s to shy or too busy shopping overseas

The sleepy head has been singing the same old song since 2004. As I see it, the budget will help his cronies more than the actually deserving. As you have pointed out, the needs of the poor kampong folks,the estate workers, the rumah murah dwellers and such have not been addressed….

Anonymous said… The BN Government is afraid more cans of worms will be spilled by RPK so they banned his blogsite and because of this Present Moronic Government is corrupted and dirty therefore on the pretext of helping the Rakyats, they could (squander) more money from the Budget Deficit 2009 and from which with most of the deficit Money coming from Petronas. Beware that the Money allocated is for their own … Cronies’ pockets expenditure and not for helping the Rakyats. Look for example at the Crystal Mosque’s and Mariner Club’s Fiasco in Terengganu’s Billions in Wang Ehsan, Billions had… Read more »

There are many people still buying cars that cost a few million dollars each. These people are also buying houses costing from RM5 million up to even RM20 million. They buy watches like Breguet and Frank Muller costing RM100,000 or more each. Some go up to RM800,000 each and yet, there are buyers in Malaysia. And they are not foreigners. They are Malaysians. They buy Giorgio Armani suits, Gucci handbags. Theur cloths are all couture ie each piece runs in the thousands. Like a shirt costing a few thousand ringgit. Strangely, these people are not the business community people who… Read more »

Let’s change the lifestyle of UMNO first by reducing their salary to less then 50% kekekeke, after all I understand that … SIL salary is bout RM120K per month!!! reduce his salary to RM60K per month will not hurt him much rite???

cthe world wide outcry is regarding companies selling pesticides, go google monsanto pcb scandal, india fertiliser crises of the PUNJAB, the fertilisers are killing the soil, GM products. there is a worldwide grain patenting scheme going on wherby these fertiliser companies are claiming the rights to all the food seeds worldwide, this is not widely acknowledged in malaysia, it happening but nobody is talking about it.

the problem is the BN government is aiming for the stars and the moon, when the basic infrastructure is not even there. When you can’t even follow the auditor general’s recommendations or act on all the incompetance from the govt sector, an e.g all thAT outcry that we are computerising our govt offices, how many times have you gone to a govt office and hear this familliar term “computer down”, instead of reinventing the wheel or for that matter spending money on grandiose schemes like the angsakawan (lame duck astro-tourist) , fighter jets, submarines, longest roti chanai , ketupat, 100,000… Read more »

Thanks, Anil, for the analysis of the Budget from a Chartered Accountant’s point of view.

The questions you posed will raise much needed awareness among the ignorant, myself included.

Keep up the good work. Cheers.