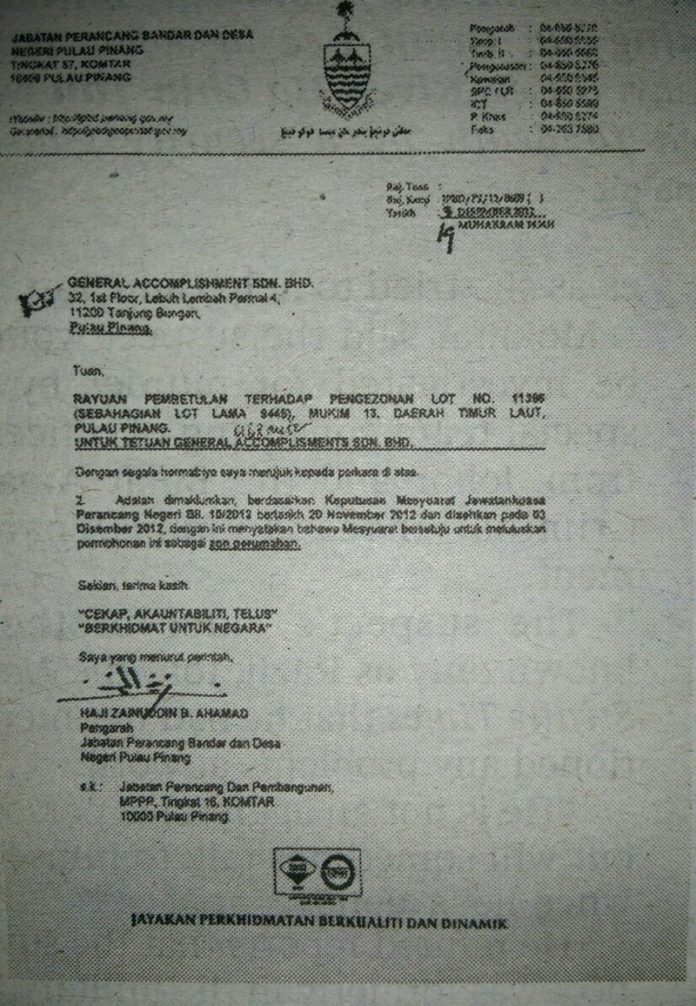 More specifically, as Malaysians become more educated, they should be allowed to witness the decision-making process in the approval or otherwise of development projects in local councils or state governments.

An interesting case is the Bukit Relau or “Bukit Botak” project.

According to a newspaper report, the body that approved the application to undertake a housing project on Bukit Relau was the State Planning Committee (SPC). This was stated by the then director of the Penang Town and Country Planning Department, Zainuddin Ahmad. The approval to rezone the 23ha hill-top land to low-density housing land was quietly done in 2012.

SPC is a body that is chaired by the state’s chief minister or mentri besar. In this case, it was the chief minister, Lim Guan Eng. The members are made up of not more than three state executive councillors, the state secretary, the state legal adviser, the state financial officer and several heads of departments and four members from the public appointed by the state authority. Thus it is a very powerful body.

Unfortunately, SPC meetings are not open to the public or reporters and the minutes are confidential documents. As such, the public is kept in the dark when a project is approved.

The change of land use of Bukit Relau was made known to the public in 2013, although its approval was made in late 2012.

It only became public knowledge when the hill top was cleared of trees. Looking ahead, anyone who drives on Penang bridge from Butterworth to Penang Island cannot miss the bald patch. To many Penangites, especially the leaders of non-governmental organisations, the name Bukit Botak (bald hill) was born.

The name of the landowner was not disclosed by the municipal council. According to a senior officer of Majlis Perbandaran Pulau Pinang (MPPP) it would take about a month to get the Land Office to reveal who the landowner was. He was wrong. It was and is relatively easy to get the names of landowners in Penang with payment of some fees.

Whether or not the state government had given approval to the change of use was not clearly known. Consequently, the state government was not thoroughly questioned as to why it approved the change of land use. In a press conference on May 29, 2013, Lim said that the Penang State Government had not approved a single project 250 feet (76m) above sea level. As Bukit Relau was and still is more than 1,200 feet above sea level, the statement gave the impression that no approval was given to the landowner.

Apart from the Consumers Association of Penang (CAP), the Penang Forum, a loose grouping of many non-governmental organisations, has also questioned the cutting down of trees and vegetation in Bukit Relau.

The steering committee of Penang Forum asked why the state government did not disclose that it had approved the development of the hill land. Quote: “In fact, there was little transparency in this drastic change in the land use policy in Penang.”

Whether the state government rescinds the approval to change the use of the hill top from hill land to residential is not known and little has been said about this issue.

What quickly took place was that the state government took the developer to court for carrying out earthworks without permission. The landowner was fined RM50,000.

It took about two years for the leaders of the NGOs to realise that the change of land use was approved in 2013. On April 23 this year, the Penang Forum Steering Committee was quoted to have urged the state government and the Department of Town and Country Planning to “hold a public dialogue to explain their actions on hill land”. So far, the state government or its leader has not replied.

Until today, despite the planting of trees, the baldness of Bukit Relau is still an eyesore.

It is fair to believe that the popular CAT (competency, accountability and transparency) principle is slowly diminishing.

There is a serious need to restructure the process of determining applications to undertake land development in Malaysia. The present process does not allow developers and the people affected to witness the decision-making of the One Stop Centre of the council or the State Planning Committee.

In fact, anyone, including reporters, should be allowed to witness how the councillors and officers of the local authorities or the members of the SPC determine applications to undertake property development.

The C.A.T. has become a mouse, does thing curi-curi

Even LCW is ‘invoking this’ in order not to reveal the identity of the wife of a influential person supplying him the cordicep tablets?