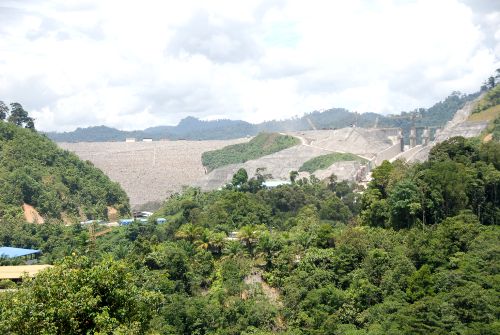 RM3 billion of your EPF money has been lent for the Bakun Dam project (Photo credit: Raymond Abin/IPS)

This news report below doesn’t sound good. The Tenaga Nasional Bhd CEO is saying that government support is needed for the Bakun Dam to be economically feasible. Is this a request for a bailout?

Remember, we already have more than a 40 per cent electricity reserve margin in the peninsula, and more dams are supposed to sprout like mushrooms in Sarawak.

Then there’s the whole question of the viability of the Bakun Dam, seeing how even the dam catchment areas have been logged or degraded.

And they still want to build the Murum Dam near the Bakun Dam and relocate a thousand Penan inhabitants. Where is the money for Murum going to come from?

“It can take the form of a pseudo-govt support in terms of the financing or other kind of support. But to ensure that the tariff from Bakun to Tenaga is at an affordable rate there must be some support. For Bakun, it cannot be purely commercial financing,” he told reporters during the International Energy Security Forum 2008 yesterday.

When asked about the financing of the 2,100 MW Bakun dam, Che Khalib said that he had already met with a few credit agencies.

“The initial response has been quite positive,” he said, but added that the government needs to play a role as well.

To recap, Tenaga together with Sarawak Energy Bhd have put in a bid for the Bakun Hydroelectric dam project earlier this year. The two power providers are also looking to form a consortium to build an undersea cable to transmit the power from Sarawak to the peninsular. Bakun is expected to cost some RM7 billion while the cable project is expected to be another RM9 billion.

Che Khalib added that now would be an ideal time to lock in prices of raw materials if the consortium were given the go-ahead.

“Prices of materials such as steel and construction costs in general have come down,” he said.

Tenaga chairman Tan Sri Leo Moggie said that the feedback from the government on the Bakun project and undersea cable has been encouraging.

“We are expecting to hear something very soon. Bakun is important to us because without the energy from the dam, we would have to find an alternative fuel to substitute.”

“At this point, the only fuel that can be considered is coal. Finding the correct price structure would be very difficult,” said Moggie.

Moggie added however, that the recent drop in energy demand gives the national power provider some time to play with.

On the impact of coal on Tenaga’s bottom line, Che Khalib said it was difficult to price it as no one was offering coal at a fixed price anymore.

“We already have secured our coal needs up until December next year, but the issue with it is the price. Most coal suppliers are now insisting on an index-linked price, which is determined at the point of delivery,” Che Khalib explained.

Thank you Elaine for the correction. Must lay off the bottle…..

The Bakun Dam is an economic and technological dead-end.
That’s the fact of it.

Its just the Federal Government refuses to acknowledge it for “unknown” reasons.

Andrew, it is not Eurostar (one lessee of the tracks), but Eurotunnel (actual lessor).

sarawakian will always vote BN
just a sweet and candy will guarantee
to get their votes.

time for sarawakians to stand up and kick out the government.
its mind boggling. 40% reserve margin is more than enough buffer but this govt is gonna spend billions to create bigger buffers. UMNO appetite for money seems insatiable! onlyway to stop the bleeding is to kick BN out.

how about the timber logged in the dam area. Must worth lots of money. Did we pay someone to ‘clear’ it?

It cannot be purely commercial financing.

That’s because most people with money to invest would like to see a return before they’re dead.

I was in Kayan and Penan village and they have no electricity even though we are now in year 2008.

These dams do not help the villagers except the CM and his cronies to earn more monies. I have been against this indiscrimiate activities in Sarawak.

Unless people in Sarawak speak up in the forthcoming state elections, the plunder will go on and the people’s hard-earned money will continue to disappear. The Taib family will continue to (be wealthy) while many more people and families living in the rural areas will be uprooted and their source of income and living destroyed. C’mon, people of Sarawak… wake up and join the fight for justice!

The BN rich – especially that ridiculously rich Taib Mahmud and family – get richer still while we the poor tax-payers (note Taib Mahmud does not pay tax!) finance their lavish lifestyles by continuing to vote for the BN. Time to dumb them all lock, stock and barrel…! Our chance will come during the snap general election due by mid-year 2009!

Um… 1.6b for helicopters? 5b for Valuecap bailout? Azalina’s PIMPena? Now Bakun dam 3b… What next…

There are something like 11 more dams to be built in Sarawak. Sarawak electricity requirement is only a small fraction of total electricity generated by Bakun. Yet, plan is afloat for another 11 dams. And you can bet your bottom ringgit that Taib’s family (interests) will (be involved)….

It doesn’t matter to them if thousands of natives have to lose their homes and ancestor land. And what Taib wants, Taib gets.