The demolition of the ‘Leaning Arch of Penang’ at the Botanic Garden went horribly wrong when the large structure inadvertently toppled over, crashing through a metal hoarding. 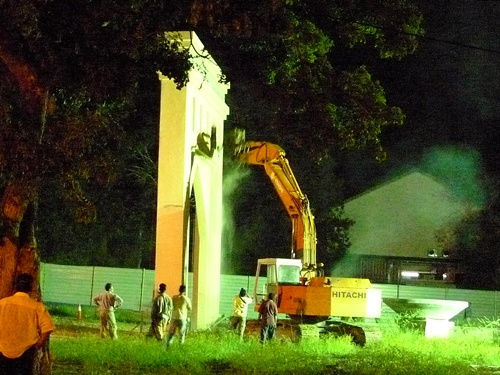 At precisely 8.45pm, a hydraulic breaker mounted on a crane began slamming against the upper portion of the leaning arch. The jackhammer-like machine tore bits of concrete from the arch and eventually punched a gaping hole just above the centre of the arch. The arch didn’t stand a chance nor did it put up much resistance.

Suddenly, just before 9.00pm, a horrified cry went up among the contractors’ workers as they yelled to warn any passers-by outside the perimeter hoarding that the arch was toppling backwards away from the crane.

It fell 90 degrees (actually, less than 90 degrees-lah, as the arch was already leaning!), almost in slow motion – as if it was frozen or suspended in mid-air… before crashing heavily down to earth. As the heaving structure slammed to the ground, it tore into the 9-foot high blue metal hoarding, crumpling it like a sheet of paper.

Did it fall on anyone or anything? Thankfully not. No one was passing by along the road parallel to the hoarding at that time; otherwise, they would have been squashed to a pulp. The horde of journalists and press photographers who had come to record the event for posterity were smart enough to camp along the perimeter on either side of the arch, and not facing it.

Onlookers quickly gathered around to survey the ‘carcass’ of the fallen monster. By then, police had appeared, preventing the small crowd from getting too close. A bit like latching the barn doors after the horses had bolted! 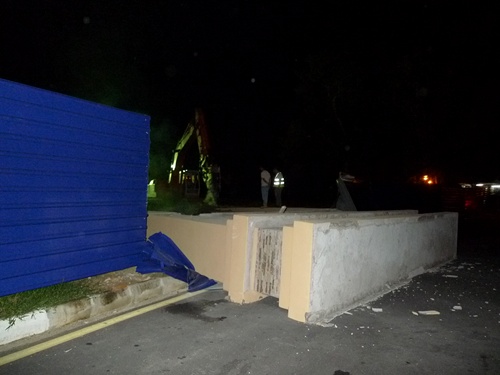 The demolition work was carried out, probably by new contractors. Someone spotted a familiar Drainage and Irrigation Department (JPS) official.

An engineer (not involved in the demolition) among the onlookers shook his head in disbelief. “That was a narrow escape,” he muttered. “I don’t think the contractor was expecting that. They probably thought they could bring down the arch by punching it from top to bottom so that it would just crumble down. They probably never thought it would topple over from the force of the hydraulic breaker.”

He pointed to the ‘footings’ of the fallen arch. (The footings are the stumps at the base of both the pillars of the arch.) “Look how small the block is and how shallow the depth was,” he said. “It looks around three feet deep or so.”

No wonder the arch was leaning.

Earlier in the evening, I had received an sms from a reporter: “Bring your popcorn, muruku and mat to the show of the year… Leaning Arches of Botanic Gardens to be demolished 8pm tonite.”

Looking on among the press photographers was Tengku Idaura, the new chief controller of the Garden, who must be hoping that the end of this episode will mark a turning point for this state landmark. But there is a huge mess to clear and a lot of ‘upgrading work’ to reverse. Already, there is now a tussle between the authorities (Tourism Ministry), who want to salvage the ‘upgrading work’ already done, and local experts more familiar with the garden, who want to restore it in line with best international practices.

What this saga also tells us is that putting up ill-conceived concrete structures is NOT development or ‘upgrading’, especially if it disrupts our harmony with Nature.

You need look no further than the Municipal Park (formerly the Youth Park) nearby to see how that park has been so built up and damaged by car-parks, a skating rink, a large hawker complex, two paved children’s playgrounds side-by-side, a reflexology pathway – all next to each other. Concrete, tarmac, and paving all over one section of the precious and limited green space. Around one of the two small playgrounds, I counted at least eight signboards! (Don’t ask me what’s written on those signboards; no one reads or pays much attention to them, anyway.)

Let’s hope that the bringing down of the arches signals a new way of thinking about ‘development’. Development that destroys our harmony with Nature is not development. We have to control our irresistible urge to ‘pave paradise’, as the folk singer Joni Mitchell lamented in her ballad “Big Yellow Taxi”.

Just reading this news makes one want to puke. How can such a sub-standard arch be okayed by Tourism Ministry. Yen yen dragged her feet until pressure forced her. Lucky no one was hurt. What a shame. Money shouldn’t be spent this way. Bad image for Tourism Ministry, dont you think so? Talk of them and you will be reminded of the leaning Botanical arches. What an ache!

Henceforth, will you trust them to manage nuclear energy efficiently?

Such unsafe shoddy work, luckily they did not collapse and kill any visitors to the Botanic Garden!

The 3 feet foundation for such a high structure is definitely not edequate! No wonder it was tilting. Haul out the Project Engineer for such irresponsible piece of civil work!

Why then was the Ministry of Tourism so stubborn, and what took them so long to demolish those dangerous structures despite public outcry in the tv and news media? Penangites and Penang civil societies should sue her and her ministry for unnecessary spending and misuse of public funds!

Any crony with minimal BN elements cannot do anything right..

Oh, sorry…they are pretty successful in (wasting) the rakyat’s money.

Anil, you just described the end of the BN government.

Lucky nobody was standing on the side of that metal hoarding

Can’t they do anything right?

Aya LBJ, don’t despise this UMNO led govt….they sent a “ketuanan… ” to the moon…in a “borrowed” spaceship! That was a great achievement. How many developing nations have done that!

And it cost 100 millions dollars

RM70,000 for the demolition (as I recall from The Star) and no proper cordon?? No safety hat for the workers?? I wonder how much is the actual cost. NIOSH should come down hard on the contractor!!

Youth joining MCA to cari easy money lubang mar… normal lah.. everyone join politic for some benefits and the benefits in MY is obvious..

probably cheap contractors with a margin to ‘upgrade’ in pricing(?) Isn’t that called the multiplier effect?

In developed nations, the authority will come jumping in with requirement for reports and incident reporting.

To be fair to the demolition contractor, perhaps they were acting in ‘good faith’ and assumed the arch had an adequate foundation? The arch wasn’t demolished because it was unsafe, was it? I thought it was because it was more or less universally hated. If anybody can claim that the arch put their lives at risk, it is probably the demolition contractor – they were almost the victims of the original contractor.

Another glaring example of TAK TAHU APA contractors engaged by the Feds!

Luckily, no human life was lost, except maybe a few Kataks (garden frogs).

Let’s wait & see the 2nd arch demolition.
Will they use C4?
Better warn all the Kataks (garden frogs) & monkeys to flee!

Why not forklift it in one piece, ship it & deliver to Putrajaya.
It looks more appropriate over there!

Delivery costs billed to the Feds.

Anil, go to the Botanical Garden, at the bridge just after the Pg Bridge icon. At T-junction, turn left where the road goes uphill to Reservoir. There at right, you can see the carnage on the grass done in by tractor tyres!
Where is the common sense of the gardeners / contractors!
Tengku Idaura also should see that carnage.
A beginning of another episode of fiascos?

Thanks, tunglang, I have forwarded your comment to her and Botanic Garden friends.

“Look how small the block is and how shallow the depth was.”

And yet there are people still believe in BN government.

Last week i saw some youngsters joining MCA (in a Chinese daily).

It is really a case of have eyes but see not.

Whoever build that should be charged with attempted murder.

GOSH!what a blooming lot of dumb as####es (doing a self censorship)!…could’nt they just refer to the plans and have the actual size before zoning off the area? I suppose life is cheap in Bolehland!

What a shame no one captured the video for posterity.

The 3-feet deep footing is probably worth being dug up and preserved. It can serve as reminder and evidence to convince the public that we need to question every government project, especially federal projects in Penang.