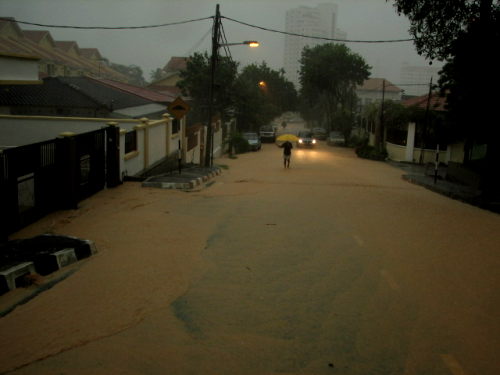 Another tourist draw for Penang?: This flooded hill-slope could be one of the Wonders of the World

Floods hit the Chee Seng area near Tanjung Bunga in Penang during heavy rain over the weeked. Incredibly, even the hill-slope was flooded.

Observed a couple of residents in the area:

On 6 September 2008, at about 5.45pm during normal heavy rain (this is the rainy season), massive amounts of rain water flowed down from the hills, overflowing all drains and onto Jalan Chan Siew Teong itself. This is due to the hills being recently cut by two housing developers. As a result, the entire road became a river of about 20 feet wide and about 6 to 8 inches deep with muddy water running the entire stretch of the road.

Residents living there for the last 39 years were shocked. During that period, they had never encountered such freak flooding in the housing area as the entire road is on a steep slope bordering the hills of Chee Seng Gardens.

This is utterly ridiculous. A police report has been lodged against the developer responsible and a complaint has been lodged with the MPPP, but still there is no action. Most of the residents there are elderly people who cannot take action by themselves.

The residents want the authorities to force the developer to do proper remedial work on the Bolton and Beverly Heights projects and to act more responsibly.

In the first place, how were such projects approved on treacherous hill-slopes? Perhaps the previous BN administration can explain.

Now the residents along Jalan Chan Siew Teong, Chee Seng Gargens want the authorities to pull the developers into line so that they act responsibly while developing the area. Now do you see the danger of having an administration that is too “business friendly”?

The residents are not against development: 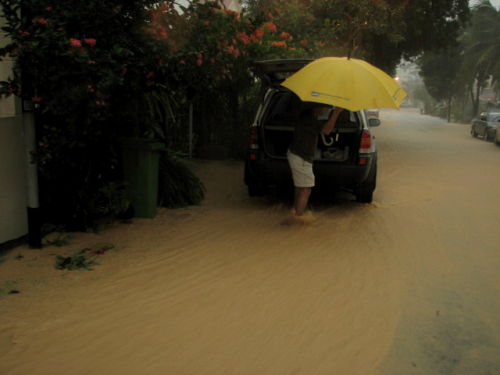 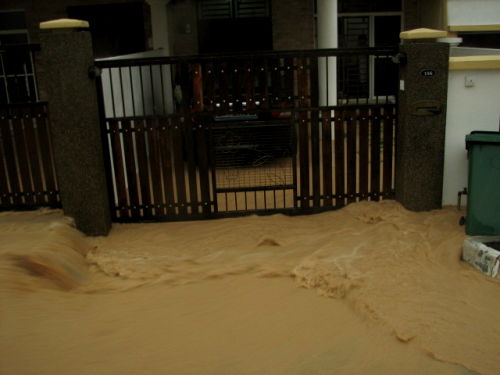 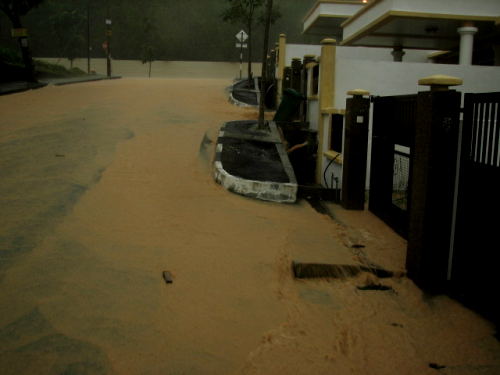 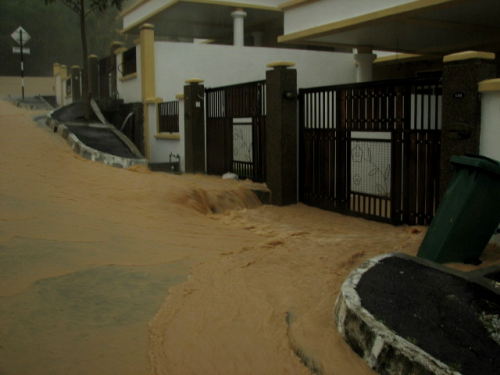 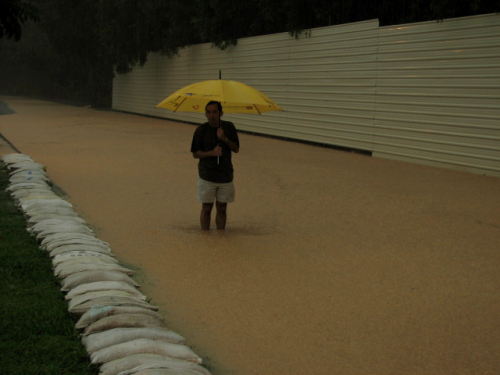 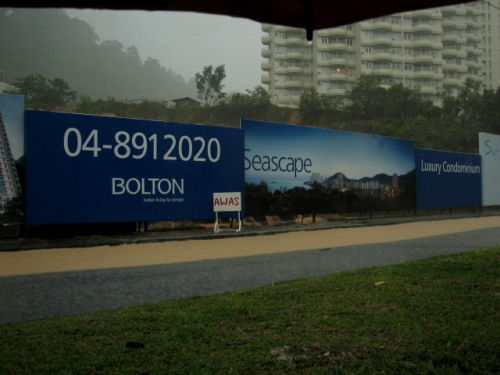 …Not really… Here’s one of the suspects

Observed a couple of residents in a police report:

The developers responsible for the hill cutting are GLM Property Development Sdn Bhd of Surin Bolton Apartments and Taman Ratu Developers Sdn Bhd of Beverly Hills. Since the start of the hill cutting by Bolton Developers some three weeks ago and Taman Ratu earlier on, they have not made any attempt to cover the cut hill sides with plastic sheeting and this is causing the severe water run off with massive amounts of silt, debris and stones. The drains along all the roads are thus clogged with debris and sand within minutes every time it rains heavily. 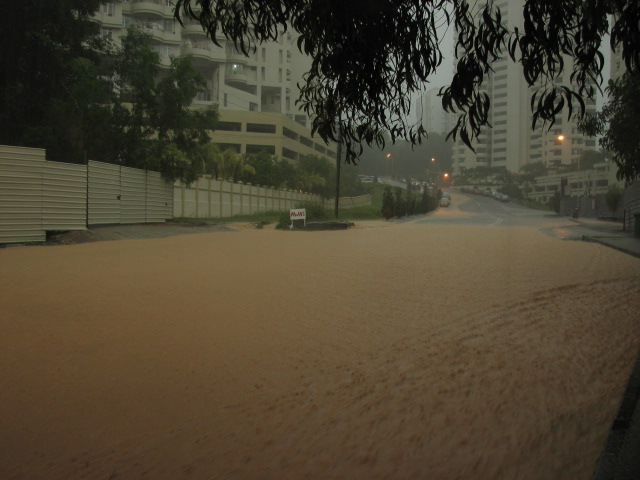 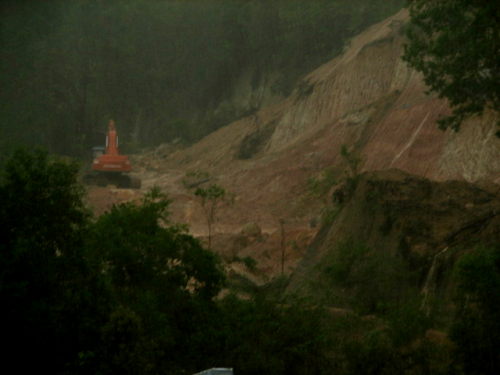 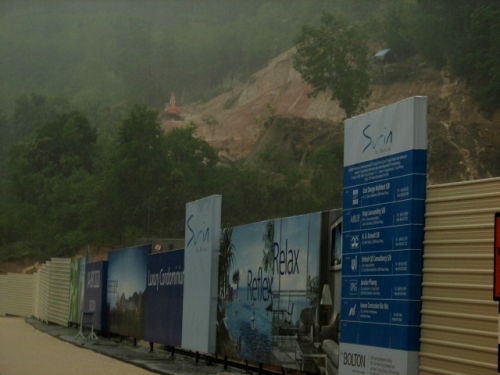 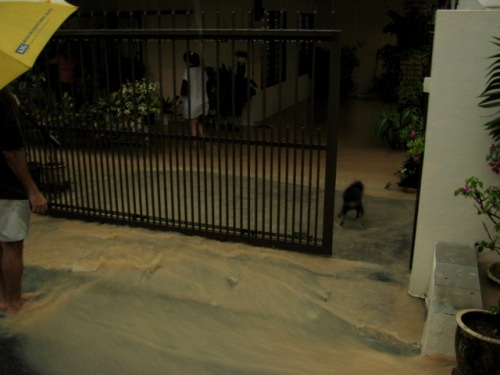 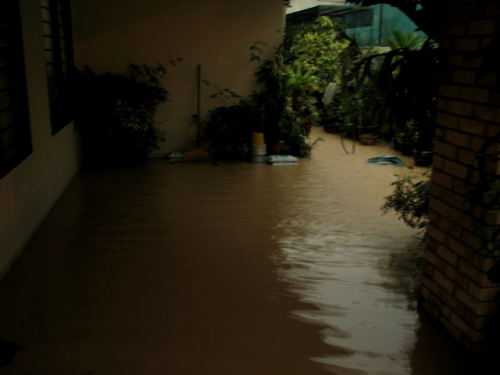 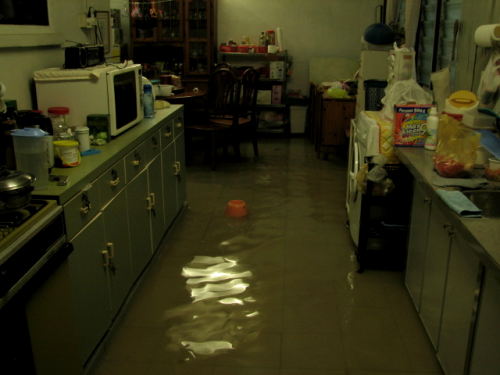 Fancy a cruise in your kitchen? The suffering and hardship of ordinary people is too much to bear

Adun Teh, please help understand Taman Ratu is going to build another row of semidees at the foothill opposite the Straits Regency Apartments in Beverlly Hill. The developer just cleared only a portion of the hill behind Surin’s project and that causes a massive flooding at Chee Seng Gardens recently. Can you imagine what will happen when they clear the whole stretch up to the existing water tank. God bless the residents at Chee Seng Garden.

Those of us who are Penangites know how our home island used to be till Koh Tsu Koon took over from Lim Chong Eu. Rampant hillside developments @ I’d rather call them ecological destructions, have destroyed the pristine rainforest’s of our island ‘s water catchment areas and succeeded in robbing the Penang Islanders of their once famous rivers that flowed with clean, drinkable waters. Water that once drew the British to stop over at our home island and stock up on their drinking water supplies before sailing on to China. Penang Island has been destroyed by the TIDAK APA ATTITUDE… Read more »

Becakayu is not looking at the issue wholesomely. Places like Kelantan & Terengganu are seasonnally flooded due to the low lying areas near to the coast, and the severe amounts of water dropped by rain over a short period of time. They have been historically flooding. However, in Chee Seng Gardens, Tanjong Bunga this is a hill slope. Floods do not happen on a hill slope unless something has gone wrong, seriously wrong. I have lived in this area for nearly 40 years and there has not been a flood due to water run off from the hills in this… Read more »

YB Teh (ADUN for Tanjung Bungah), should take note and take necessary action to ensure such incident will NOT recur.

Please accept/publish more photos of the hillslope sliding & flooding, including some from the Miami Green/BF area. Maybe we can embarrass the govt into doing something? Photos of drains plugged with garbage, another cause of flooding, should be posted as well. Maybe a separate site?

YB Teh (ADUN for Tanjung Bungah), should take note and take necessary action to ensure such incident recur.

Well in the options given I had marked not sure as the reason for the floods. Simply put it is the buyers. Supply and demand will have to meet in order for a market to exist. Let us not blame others but overselves for being so inconsiderate towards mother nauture. We Malaysian are very insensitive towards the environment. Only when we see floods we cry foul.

Other places got flooded too when rain falls for three days in a row. Places like Terengganu, Kelantan during Dec-Jan period when wind blows from South China Sea. Now is Penang’s turn when wind blows from Indian Ocean and brings lots of water. There’s nothing political about it. Kelantan and Terengganu, no hillside development, also flooded. Those trade winds – not only they bring the immigrants, they also bring water. So Penangites, relax. Ask the Kelantanese and Terenganuwians and you what they will say? It’s just WATER!

Andrew Aeria If the Council ask the developer to implement the environmental mitigation and safety measures, in means the project is to go ahead and take measures that the incidence will not repeat again. Even if the developer through the contractor construct a sediment pond and comply with the regulations, the design is only 1 in 5 years storm and the recent rain could be 1 in 50 years storm or more. If the Coouncil is to ask them to stop work, then the half completed construction will be a sore eye and breed dengue and possible other mosquitoes related… Read more »

These two projects will permanently destroy the environment & landscape and even the safety of Tanjung Bungah. We must all do something serious to stop these projects immediately. Anil, I am all for positive actions, you got my email, please do contact me. I have just moved back from KL and am so disheartened by all these.

someone should compile and make a website dedicating to the legacy of penang ‘administration, development and social affairs’ under the former CM of penang and the gerakan party.

When Mahathir became PM I opted to spell Development with an ‘i’ so it reads “Devilopment.” Total insensitivity to nature’s beauty and mere lipservice to environmental issues goes hand in hand with unmitigated greed and unlimited access to an utterly corrupt government is ultimately what causes these terrible floods, landslides, and sinkholes.

If my dad was a Deviloper I would immediately disown him. Integrity is worth a great deal more than Datukships.

Penang is a shell of what I used to know as a kid.

The whole hill looks like its coming down in a river.

I think the DAP-PR state government in Penang has to act NOW. The MPPP in Penang has to act NOW. All the DAP-PR’s previous talk about being different from the BN is meaningless if there is no action taken immediately to solve this problem. We cannot merely hope to goodness that the two developers gouging out the Chee Seng hillsides will see reason and act to conserve the environment. CM Lim Guan Eng and MPPP YDP, please take note. Developers like GLM and Taman Ratu don’t give a damn about the safety of community residents or about the environment! All… Read more »

well, i suppose the developer has followed all the troublesome procedure to obtain the approval.

Your photos provide a vivid illustration of why Penangites are so pissed off with the KTK administration.

Not only is that area affected, the hillside along Miami Beach is also being cleared. i have some pics of the clearing as well as the brown seawaters of Miami Beach., how do i send them to you?

Does these developers have proper EIA reports? are these EIA reports adequate/ of sufficient quality? if not who was responsible to approve such projects?

am i right to recall that towards the end of Lim Chong Eu’s government and the Highland Towers incident, hillside projects were suppose to be banned on Penang Island? if so, when did they start approving them again?

I have some more pictures taken from my place which have a better view of the damage done by Surin (by Bolton) & Beveryly Hills (by Taman Ratu)..PS: I am staying in Coastal Towers

Amazingly awful  The pictures speak a thousand, no million words, Anil. You asked “Will Penang follow Selangor in banning hill-slope deveopment?” The answer is IT MUST! The state government must act before there is loss of human lives. As it is, the flood damage is extensive and many Penangnites have to bear the brunt of repairs etc. In Hokkien we say “poot sampah” (clean up rubbish”)..The state government now has to deal with all the “rubbish” that has been left behind by the previous one! Like all good things worth waiting for, it will take time for the benefits… Read more »

i wrote a short article to the STAR editor many years ago when i noticed several high rise apartments destroying the greens up by the hillside. It was published.

What is scary is that from the photos where BOLTON is developing, i see that the water flows very freely. What happens when there are 2 blocks of apartments there? Will the foundation be eroded?

I hope the developer or rather the purchasers take note!

Please use whatever leverage you have to get the Penang State Government to go after the irresponsible hillside destroyers!

They are not developers! Developers should be people who improve on things not be the CULPRITS WHO DEVASTATE PRISTINE HILLSIDES AND FOREST RESERVES all in the name of the mighty Ringgit!!!

I for one wish to see Chief Minister Saudara Lim Guan Eng throw the book at the people responsible for this ecological destruction!!!

We want to see justice be upheld and put to practice not just tease!!!