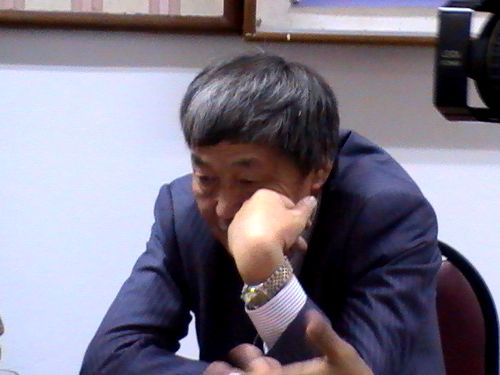 The picture says it all: Bewildered and dejected, Setev Shariibuu looks a broken man after the verdict this morning

Someone asked, “Do you believed that justice still exists in our country?”

Setev shook his head as his interpreter replied, “In my country, there is this law.. Justice!… and he (pointing at Setev) doesn’t want to criticise the judge’s decision because he hopes this decision was taken in line with  Malaysian law… because it’s an area where the lawyer and the judge are independent of the Government…”

The interpreter was interrupted by Setev, who took out his passport issued by the Mongolian government, saying he is a citizen of Mongolia, which “protects its citizens”. 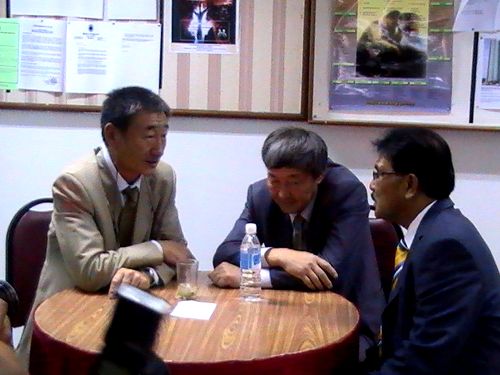 A father’s anguish: Setev (centre) cuts a forlorn figure as his interpreter Siizkhuu Sainbileg (Second Secretary, Embassy of Mongolia, Bangkok) (left) and the Mongolian Consul based in KL (right) huddle with him.

Setev was asked later if he would be taking the matter up with the World Court as a last resort.

“I have nothing to say… at this moment,” he replied through his interpreter.

A Special Tribute to Altantuya…an innocent victim of a heinous crime…that ended her young life…4th anniversary of her being blown up to pieces in Malaysia…during the month of Ramadan in 2006.. What words are there to express sorrow.. When you can hear them no more…? Your destiny ended here..in my nation called Malaysia In the most tragic way What justice can be great enough.. To bring you back..alive, in flesh and blood? To restore your dignity torn apart? How much pain did you go through? How much fear filled your being? At that moment..when time stood still for you? Questions… Read more »

.. Epitomy of a Failed nation – Malaysia.

This was a foregone conclusion but this is only part 1….

Mr shariibuu,
We are sorry to hear the case had come to this conclusion. This land is call MALAYSIA and any thing can become BOLEH!!!!!. but we believe in GOD the fair and justice judge. Who has done wrong will not escape his fury and punishment.

We must stand up and be counted now. we must fight them in the courts, we must fight them in the media, we must (protest) peacefully in the streets if we must. We Malaysians have had enough. Our leaders like Anwar Ibrahim, Zaid Ibrahim, Lim kit Siang, Karpal Singh, teresa Kok must challenge their ‘ketuanan’ at every juncture. We will not rest, we must not rest. Why is Raja Petra in Kamunting jail when Baginda Razak et al are walking free. Why are people like Mukhriz Mahatir allowed to make sweeping statements that border on some would say racist statements… Read more »

P.I. Bala, I believe that you do have children of your own. Just take a deep breath and imagine for one short moment of your present life that it was you in the same predicament as Mr.Setev and that it was your child instead (god forbid as one life lost is too many). What would you feel if someone made a statutory declaration one fine day and then said(what tantamounts to) ‘acah je’ the next. Whatever it is, if you did have any relevant info pertaining to this case which you ran away from revealing, for whatever reasons that you… Read more »

Wat do u xpect..when UMNO/BN CIRCUS is still in town?

To Mr Setev & Altantuya’s 2 kids… we are truly sorry.

I suppose the verdict was not unexpetced. When GE13 comes in 2012, lets make it decisive. We can wait.

I am sorry, Mr. Shariibuu. I am ashamed of being a Malaysian. …

I am left speechless and ashamed. We are so sorry and so sad …

…Where do normal people, the ordinary citizens stand in this country? Nowhere! God help our country.

It is a better outcome for Baginda to be discharged… ultimately the real culprit is not him. If h had been found guilty – the CASE is closed!!

Eventhough Altantuya is gone,she has been there in the court room following the case and she also know who are guilty ones.People can cheat,cover up and mislead the court but Altantuya,the guilty ones and someone up there know the truth.

You may escape Malaysian … court but you will not escape the punishment specially prepared for you when your time is up.You can laugh now but just wait who will have the last laugh.

…those two UTKs… we will never know their faces.

,,,(if they are sentenced to death, how will we know if they are not) still alive…?

The judgment is a foregone conclusion…
This is justice, Malaysian style.

Those two cops who will be prosecuted should spill all to save their necks. Why should they be sacrificial goats?

anil, your photos of mr shariibuu hurt more than the court decision. the latter can be brushed aside with a jaded, cynical “yeah. right. what else is new?” sneer. mr shariibuu’s naked pain and hopelessness, on the other hand, cuts deep. and this can only be but a smidgen of the father’s anguish.

On behalf of 99.9% of Malaysians, I apologise to you for all your suffering. …

Guys, it isn’t what it appears to be. It goes much much deeper than what we are led to believe. … …This goes beyond just a simple murder case….

If Baginda has no case to answer what then would be the motive for Altantuya’s murder?

You mean two total strangers woke up one morning and said ‘There must be someone called Altantuya in KL, so let’s find and C4 her today!!’

Perhaps the judge missed this crucial point you think?
htp://donplaypuks.blogspot.com

Wel this is expected and dont be shocked the 2 guys ….