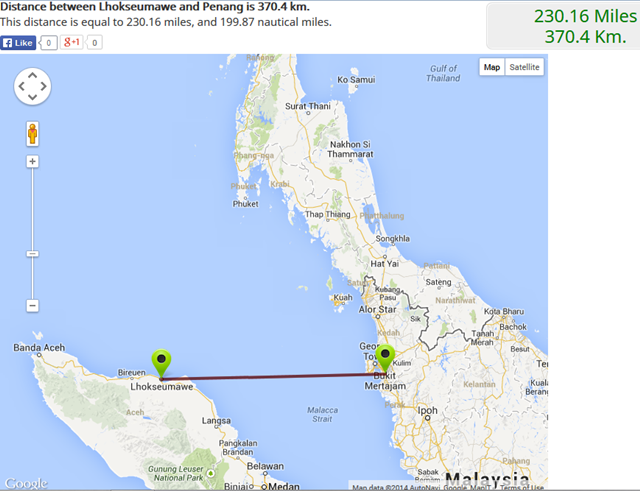 The Malaysian Air Force radar in Penang, said to be corroborated by satellite, detected what they believe to be Flight 370 flying westwards but strangely, the Indonesian Air Force said that its radar in Aceh did not detect MH370 over the Straits of Malacca, according to the Jakarta Post (14 March). Neither did Thai radar.

Meanwhile, the Thai air force said on Saturday that its radar system did not detect the plane either, reported the Bangkok Post.

“Our most updated information in the radar system was in Hat Yai where the air force detected MH370 flying out of Kuala Lumpur in Malaysia. That was the first and last time we detected MH370,” air force spokesman AM Monthon Sutchukorn said.

“Our most updated information in the radar system was in Hat Yai where the air force detected MH370 flying out of Kuala Lumpur in Malaysia. That was the first and last time we detected MH370,” air force spokesman AM Monthon Sutchukorn said.

If a plane with no prior notification and without authorisation enters Thai airspace, air traffic controllers of Aeronautical Radio of Thailand have to alert the air force, he said.

The air force also has its own radar system to detect planes entering Thailand without permission having been requested, he added.

India maintains a radar north of Port Blair in the Andaman Islands, with a coverage of 200 nautical miles, according to the Hindustan Times (15 March), which asks if Indian radars failed to detect MH370.

A major military base in the Indian Ocean is Diego Garcia, about 2100 miles from the peninsula. The British occupied the territory in the early 1970s, forcibly evicting the native islanders into destitution. It then allowed US forces to use the territory, turning it into one of the most strategically important and secretive bases outside the United States (Princeton University Press). The facility was reportedly used as a key staging post for US bombing raids against Iraq and Afghanistan and for two secret CIA “extraordinary rendition” flights carrying terrorist suspects in 2002 (The Independent).

Swirling speculation and conspiracy theories suggest that MH370 may have approached Diego Garcia. Hishammuddin, however, has denied MH730 landed at the base (The Star, 16 March).

But how far does Diego Garcia’s radar coverage and its other surveillance extend?

And what about Singapore’s?

Australia has powerful radar coverage which extends 3000km, according to the Sydney Morning Herald; so that’s worth a closer look.

Professor Ball said the reach of Australia’s powerful Jindalee over-the-horizon radar is 3000km and could be expected to have picked up the Boeing 777 jet as it traversed Indonesia on any southern route.

However, whether Jindalee, which targets beyond northern Australia, could precisely identify the plane is another matter, as it would have appeared as “just a dot on the screen”, said Professor Ball.

nkkhoo.com has lost its wide readership after he removed readers’ comments section. I hope anil continue to engage its readers and don’t make same mistakes as nkkhoo.

nkkhoo now resort to sensational news like his absurd accounts on what happened to MH370. quite pathetic.

Are you “recalibrating” for our Honourable Transport Minister ?

The question is has Najib been fed wrong info that MH370 flew west to Indian Ocean from Gulf of Thailand? I don’t think the Indonesians and Thais are lying. What reason is there for them to lie?

Just a wild guess: Maybe the authority should check the line of locations of last two pings and see whether they intersect.. if they do, that means the intersection point likely point to the location of the plane, and the plane was stationary when it sent out the last 2 pings.