1600: The crowd has dispersed as the protest ends peacefully. Meanwhile, Umno Youth’s Tun Faisal reports via Twitter that some 5,000 people turned up for a Juara Rakyat event in Sembrong, Johor.

1537: The police have prohibited the crowd from gathering outside the school-gate; so the protesters have moved across the road but they are still facing the school. Riot police have positioned themselves in front of the gate. 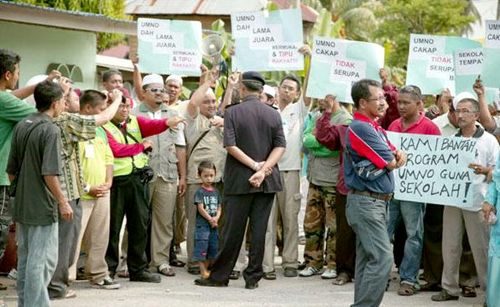 1502: The police had given the crowd until 3.00pm to disperse. A Pas member is now negotiating with them. He says the protesters just want to know why Umno is using a school.

1447: Dozens of people are now protesting against an Umno event held in a government school near Permatang Pauh, according to an eye-witness at the scene. More people are arriving.

The event, part of a nationwide ‘Umno Juara Rakyat’ programme, was due to begin at 2.00pm at Sekolah Rendah Kebangsaan Bukit Indera Muda, which lies within the stronghold of opposition leader Anwar Ibrahim.

Outside, the protesters are carrying placards reading “Umno juara tipu rakyat” and “Umno jangan guna sekolah“. An uztaz has addressed the protesters in front of the school gate.

About half a dozen plainclothes police officers are at the scene as well.

In an earlier protest on Friday, about 50 villagers gathered peacefully outside the school.

Last month, in another event in the area, Umno awarded RM40 vouchers to pupils who had excelled in the UPSR examination – though one parent complained they had to wait in line for nearly two hours.

The Umno Juara Rakyat programme was initiated by Najib and is being hosted nationwide by 191 Umno divisions and BN component parties. The programme aims at “providing aid for everybody and not just Umno or BN supporters”.

Umno information chief Ahmad Maslan had earlier dismissed claims that the programme was making use of government agencies to win support from the people.

Umno is reportedly using a four-pronged approach – face-to-face sessions, print, electronic and virtual media – to inform the people of federal government projects. Umno divisions have been urged to organise seminars and talks at least once a month, perhaps in conjuction with the Juara Rakyat programme in their respective areas.

No police will take action if it is UMNO’s protest because Malaysian police are (perceived to be) political police….

I am told state exco men cannot enter schools for any event, even for school sports…

UMNO youth is doing similar stunts in Sabah. They recently came to Queen Elizabeth Hospital, Kota Kinabalu escorted by the Mainstream Press Media and all the bootlicking bigshots of the hospital.

The hoo haa that these goons generated, one will be forgiven to think that some superstar was in town.

These Umnoputras are going all out to gain rakyat support by misusing public facilities. How can the(y) do this, esp it is a school. They have been doing this unethical and shameful episode for the past 52 years. Enough is enough. The rakyat has woke up and not to be hoodwinked by corrupted politicians in UMNO/BN. We rakyat will keep on protesting irrespective. PDRM stay out and spend your time and energy doing something good for the rakyat. Just look at how efficient you … are when confronting the oppositions. … when …a bunch of UMNO zombies protest not one… Read more »

…and PM Najib begs the rakyat esp the Chinese to give UMNO another chance(??) when they had it 53 years and blew it applying double-standards in their administration? They think they can take us for fools, still expect to be given another chance?

Yes, give them, UMNO & Najib the final burial this GE 13

But you have block heads like Gera kan K, who wishes to continue to be fools? Well, that is democracy!

I feel the Kampong folks have the right to oppose. If political agenda is not in it, then, the event should not be held.

And people think that Kampung folks are ignorant. As a parent, even they know that having UMNO politician in school is like having a pervert in my child’s school..

Piture of the demo I had published here..

Suspend the HM….why did she allow the event ??? The Rakyat need to put a stop to all this abuse of Public Facilities for political uses. UMNO has been doing this to promote its racist ideology all this while.As for the police prompt action…it shows they are no different from being UMNO’s (tools)…

Trust Najib 1Malaysia oops the PDRM are one of the
organ that makes us hate his 1 Malaysia. He says one thing here and next he acknowledges the groups
like Utusan and PERKASA. NAJIB must be one of the greatest pretender of all time.

only UMNO can protest.

anybody else, FRU is there to carry out the orders of UMNO.

A few questions to ponder: 1.Why was umno allowed to demonstrate and burn an effigy of Lim Guan Eng in Penang? 2.Why was umno allowed to demonstrate at the Australian High Commision? 3.How is that umno could use a school which belongs to the Rakyat for its political campaign? Questions 1&2 shows an unethical double standard stand taken by the police. Question 3 shows that umno has blatantly abused government facility for its political gain. Umno and BN are not the government.They are only political parties administrating the government.Likewise when Pakatan Rakyat wins in the next GE, they will administer… Read more »

Yes, there seem to be ONE RULE for Umno/Bn and One Rule for others.
It seem high powered people… can walk away scott free and enjoy the high life….remember Razak Baginda /Altantuya ?
He is now living the high life in Europe….big massive house ……where’s Justice in Malaysia ?
Shouting out slogans and walkabouts ( just to exercise legs ) is meaningless unless you implement policies that are fair to all.

Can you give Najib a chance when he says something and does another? Action speaks louder than words, and like 1Malaysia, what Najib says does not carry weight in UMNO!

If you want the Rakyat in Malaysia to respect you, you first need to respect the Rakyat, by stopping to abuse Government facilities!

Aren’t they(Polis-Di-Raja-Malaysia) quick when it comes to Pakatan Rakyat staging protests and demonstration!

UMNO Youth was never interrupted or arrested when they demonstrated infront of Australian Embassy recently? So it’s “OK” and nothing’s illegal when it comes to UMNO, eh?

Political parties have no business utilising government property eg schools. What UMNO did was demonstration of their arrogance and ‘ketuanan UMNO’! Talk about lawlessness in the country, no one breaks the law more than UMNO itself. What a downright shame on the ruling party and its leaders!

Another case of UMNO abusing government facilities for their personal function. This has been going on for the past 52 years and now the people have awaken to such abuse. NO MORE SHALL WE STAND IDLY BY. NO UNDER PR. NO NO NO UNDER PR.