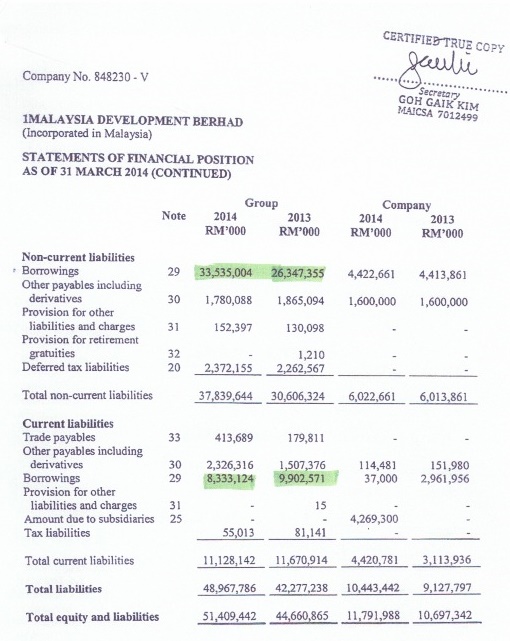 According to The Edge, the long-term borrowings of RM33.5bn include:

As you can see, the interest rates are not low. No wonder its finance/interest charges have shot up.

So the Edge raises the question, why isn’t 1MDB using its funds parked abroad instead of borrowing money? After all, it was supposed to have RM7.7bn in Cayman Islands and RM5.2b elsewhere. For this, it received RM437.6m in dividends, which The Edge points out works out to a return of only 3.3% (although Deputy Finance Minister Ahmand Maslan said the returns on the funds to be repatriated will be 6 per cent.)

Malaysia’s 10-year bonds fell last week, with the yield rising the most since January, after Fitch Ratings warned of the implications of the sovereign wealth fund’s debt on the nation’s credit outlook. Fitch cut the outlook on Malaysia’s A- credit rating to negative in July 2013, citing public finances as a key weakness.

World oil prices are projected to decline further.
This implies less revenue for our wastrel Finance Minister to play with and
the budget becoming more unrealistic.

Dear Anil,all rooting for YB Tony Pua and all other PKR trouble-shooters to find us the stop-all-this-rotting measures by Najib and his government. Please continue to highlight all other non-1MDB as only then maybe, all the ignoramus … will stop and think, just 3times payment of BR1M at less than RM1k is NO solution. If all the RM 770 (apart from latent owings) alone is attributed by jetting PM Najib and wifey alone, we the Rakyat and voters must be informed so that we need not wait for 2017 to have hin held accountable and removed. We are lucky to… Read more »

The economic logic in 1Malaysia is strange indeed. Today (Nov 19), I read that the price of RON97 is going down (but RON95 stays the same). RON97 is used more often by people who drive vehicles with higher engine capacity i.e. more wealthy people.

Check it out first before believing in such lies. Tony and Rafizi and PR should report to the MACC if there is any act of dishonest discrepancies. Don`t just talk talk. They can also initiate legal action. After all they are very good in this
This will brighten up many of the ignorant….
http://www.malaysia-today.net/rafizi-the-mother-of-all-liars/

Rafizi Ramli has dared Deputy Finance Minister Ahmad Maslan to defend 1MDB during a public forum on Wednesday, so that he can become a hero at the upcoming UMNO AGM.

The National Oversight and Whistleblowers (NOW), a non-profit outfit founded by PKR’s Rafizi Ramli, has invited Tun Dr Mahathir to attend a forum on the scandal-ridden 1Malaysia Development Bhd (1MDB) next week.

Anil should attend this event to give us the first hand account.

Thanks for the heads up, though I am sure the online media reporters will be there in full force!

Maybe there will be another problem with the electricity supply for this event ??

Is Dr Mahathir suggesting that BR1M is akin Beri Rasuah 1Malaysia, as he has said that when BR1M was given near elections or listed in the election manifesto, it created the impression that the aid was used to buy votes. His quotes on his blog regarding BR1M: “If incomes are to be increased, it should be by way of creating opportunities for work or business. “But BR1M has more negative implications than that. It increases the tendency towards personal dependence on the government even for one’s income, without any effort by oneself. “It weakens the character of people and reduce… Read more »

“It weakens the character of people and reduce their competitiveness in the market place,”

Agree 100% — when applied to rent-seeking mega contracts given out to UMNO Baru and BN cronies.

Disagree when handouts are CONDITIONAL ones i.e. “conditional cash transfers” — given to you only if you keep your kids in school, get them vaccinated etc. These have been shown to work in
South American countries such as Brazil.

Why say it now when 1MDB is on the route to ‘pho-kai’?
He should have advised them not to think of 1MDB before its advent in Putrajaya.

‘RM9.6bil support letter’ for 1MDB exposed …. and we can expect more revealations as Tony Phua and Ahmad Maslan (may be Chua CD Junior) square off royal rumble style at the lobby of the Parliment !

Amazing that “they” are foolish enough to think they can get away with fooling international investors and the capital markets.

What is the purpose of the letter of support to 1MDB as mentioned by Ahmad Maslan?

If Tomorrow Never Comes for 1MDB to benefit the rakyat, we may be sure the BN government to rescue the debts ?

Yang is mesmerized by this Permata songtress?

Off topic, but related to money matter management of state survival or ‘pho-san’ (bankrupt): Q: Should Penang CM post be limited to 2 terms tenure as suggested by a DAP rep? Anil, this is a cross-road question for Penangites to decide after 6+ years under LGE leadership. We may argue till the cows come home on the eve of the next GE, but we may shed some light of our perception or experiences based on facts of how good is LGE as our commander-in-chief of Penang destiny. I would personally go for more than 2 terms looking at what is… Read more »

Another one for Yang:

Most of it is because of the US$ denomination of the debt, calculated at 3.2 which has worsened so it should be even higher.. But what is less covered is the rise in assets – supposedly because of the US$ denomination of the funds controversially invested overseas – which they are bringing back because of political pressure. NOW, they have a mismatched of asset to liabilities which puts them at further risk. Prepare to listen later complaining about critics forcing them to do things that made it worst. No soverign fund in the world is as secretive and unaccountable, that… Read more »

Ahmad Maslan is,twisting and turning to convince or to confuse ud? The Edge Daily quoted Ahmad Maslan as saying Putrajaya will step in if 1MDB defaulted on the state sovereign fund’s loan. But Ahmad Maslan’s answers were in contrast to his parliamentary reply last Thursday that Putrajaya did not issue a letter of support for 1MDB. So what is he trying to tell us? Hide and seek?

Datuk Ahmad Maslan was forced to apologise to the Dewan Rakyat today for having left out “six words” during his winding speech in Parliament two weeks ago over a controversial letter of support for 1Malaysia Development Berhad (1MDB) when he said “I accept my mistake of having left out six words that — there is no other guarantee letter,”

“Missed out six words” and got away scot free for lying?