1MDB would have showed a much larger loss than its RM669m loss before tax if it hadn’t included in its books a surplus on revaluation of investment properties amounting to RM897m. 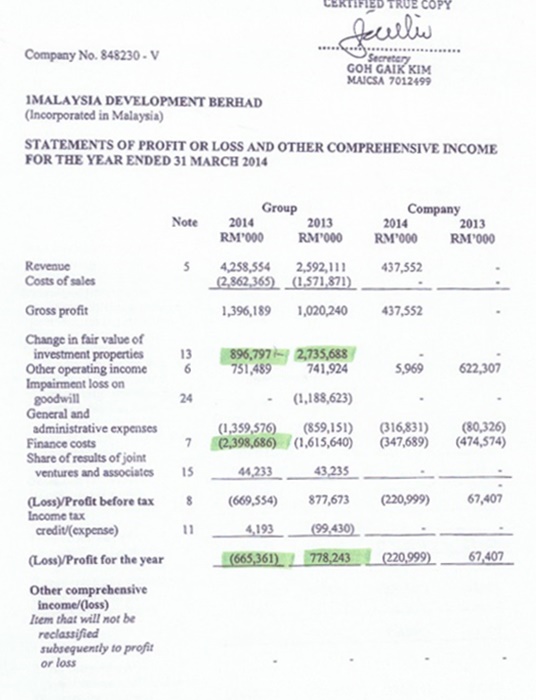 In the previous year (year ended 31 March 2013), 1MDB included a revaluation surplus of RM2.7bn in its accounts. If it had not done this, it would have incurred a loss of close to RM2.0bn instead of a profit before tax of RM0.9bn.

Other points to note:

1MDB or PR1MA housing project at Air Itam Penang – MCA Youth declares that mixed development (meaning super condos and commercial shopping area at the expense of 100% affordable housing !!!)
is OK and we would like to hear from Gerakan what their say !

Another empty promise from BN meant to wrestle votes at Air Itam during the last GE.

The 30 billions forex loses was during Mahathir period, is it not.

And who was the Finance Minister at that time. Was it not Anwar

We shall await Mohd Noh Omar defending the allegation from Mahathir than Umno Selangor has a serious and tainted image of Corruption.

Are you sure Phua, only these two be replaced and not the whole bunch of them, i mean UBAH .

Yes change and Ubah and let Anwar do the job. Look like 30 billions dollars loss in forex losses when Anwar is Finance Minister is not good enough. After adding inflation from 1990, you would want it to be 100 billions. Well that is nice prediction for Tony to say we will soon go bankrupt. Pua you got it right.

Malaysia’s democracy, economy, freedom of speech and rights and almost everything is growing up fast with some of us even arguing that it is maturing. Lets hope that some of our oppositions and their supporters would start also growing up equally fast, and stop throwing tantrums like spoilt kids just like some jerk here

US can grow its democracy because Republicans and Democrats took turn to govern the country every 8 years or so. This will not allo any form of corruption from certain parties to manifest. That is why we should opt for change after 50 years of BN’s rule in order for more transparency.

We have been told that our country will be bankrupt decades ago. We are now as strong as ever with foreigners coming here for jobs and taking up many of the business opportunities. Are we so bad as made out to be by some jerks from the opposition. Profit and loss in a company is normal. Temasek of Singapore invested in Shin Corporation controlled by Thaksin former Thai PM. It lost billions of dollars and what do these ignorant fool say. If it is BN they will have all sort of stupid reasons. And just like some saying that murders… Read more »

The scandals committed by the leaders of the country have been exposed since mahathir’s era, it has been for decades…

If there is no change of leadership in putrajaya, all this corruption will be swept under the carpet as our judiciary is …, and all this exposure of graft will be in vain, sia sia sahaja.

I think what is more meaningful is, do as what teng hock nan did, invest in old buildings and laugh ha ha ha all the way to the bank…

This very serious matter has been raised in the parliment last week by YB Tony Phua but a pathetic response from Kepala Batas MP while 3 sekawan MCA-MIC-Gerakan were tight-lipped !

Further to the expose by anilnetto.com, the readers can judge for themselves by watching the revelation by YB Tony last week here :