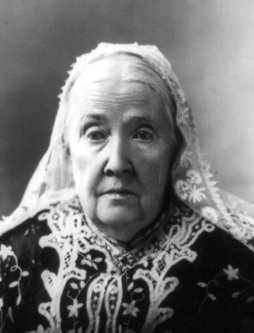 Mothers’ Day in the United States has its roots in the rallying cry by a feminist, poet and anti-war activist Julia Ward Howe (left) for women to convene a major congress to further the cause of peace and oppose war.

Howe strongly believed that women had an important political role to play in shaping societies. Today, however, Mothers’ Day has been shorn of its radical overtones and reduced to a commercial occasion of sweet sentimentality.

Arise, then, women of this day!

Arise, all women who have hearts,
Whether our baptism be of water or of tears!

Say firmly:
“We will not have great questions decided by irrelevant agencies,
Our husbands will not come to us, reeking with carnage, for caresses and applause.
Our sons shall not be taken from us to unlearn
All that we have been able to teach them of charity, mercy and patience.
We, the women of one country, will be too tender of those of another country
To allow our sons to be trained to injure theirs.”

From the bosom of the devastated Earth a voice goes up with our own.
It says: “Disarm! Disarm! The sword of murder is not the balance of justice.”
Blood does not wipe out dishonour, nor violence indicate possession.
As men have often forsaken the plough and the anvil at the summons of war,
Let women now leave all that may be left of home for a great and earnest day of counsel.

Let them meet first, as women, to bewail and commemorate the dead.
Let them solemnly take counsel with each other as to the means
Whereby the great human family can live in peace,
Each bearing after his own time the sacred impress, not of Caesar,
But of God.

In the name of womanhood and humanity, I earnestly ask
That a general congress of women without limit of nationality
May be appointed and held at someplace deemed most convenient
And at the earliest period consistent with its objects,
To promote the alliance of the different nationalities,
The amicable settlement of international questions,
The great and general interests of peace.

Gerakan K, What is wrong with an individual’s vouch for peace and not war? Even more so when she is known for her struggles in the women’s suffrage movement. This has nothing to do with her being from the USA or not, it’s about advocating peace and sexual equality. It’s about asking for peace- together with their sons and husbands- to be returned home to them. “I earnestly ask That a general congress of women without limit of nationality… be appointed To promote the alliance of the different nationalities, The amicable settlement of international questions, The great and general interests… Read more »

Why always worshiping the US ??? Got brain to think or not !!!

The man and women there support their army to play in Iraq + Afghanistan. No excuse will be accepted. Get lost now !!!