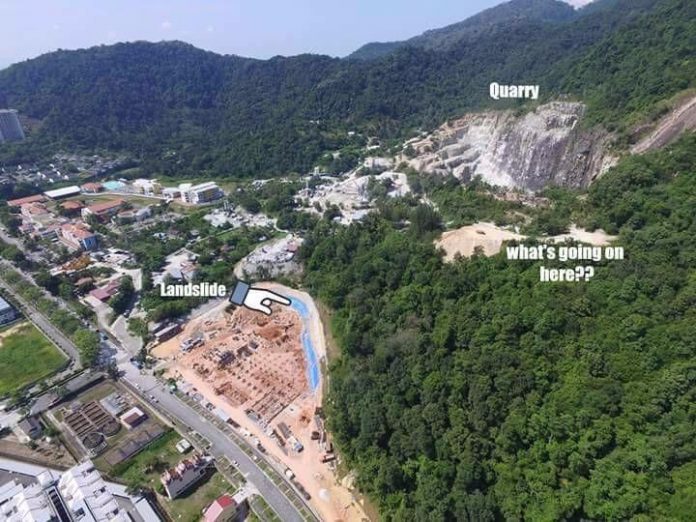 Some purported “facts” are being circulated about the Tanjung Bungah project.

2. The Pelan Dasar dan Perancangan Pemajuan MPPP 1996 is just a guideline. What carries legal weight is the Penang Structure Plan, which was gazetted in 2007.  The maximum residential density permissible for Tanjung Bungah is 15 units per acre as stipulated in the text.

Even if it is argued that Tanjung Bungah is in the primary corridor (someone during the previous administration had altered the graphic in the Structure Plan to indicate it is a primary corridor), it would be a maximum of 30 units per acre.

This project is for 980 homes in two 50-storey towers over several acres. The state government should tell us the density for this – using only the development site footprint excluding the hill slopes.

Too many high-density projects are being allowed in the name of “affordable housing” when they are not even affordable to the low-income group. [How affordable are they really, when by most definitions, genuinely affordable housing should not exceed RM250,000.] The reality is the text of the Structure Plan only allows for a maximum of 15 homes per acre in Tanjung Bungah.

3. The project may have been approved by “19 technical departments” but many of them (eg landscaping, PBA, Tenaga, Communications and Multimedia Commission, IWK, Bomba and waste management) have no real bearing on the risk of building so near a hill slope.

4. The DOE objection should carry the most weight and should override all the other departments. After all, for several large projects, the state is happy to tell us that the project would only go ahead if there is DoE approval eg the controversial land reclamation in Tanjung Tokong. Here we have the DoE itself objecting to these massive 50-storey towers near a hill slope (unlike other low-rise projects nearby). So why was the project allowed to go ahead?

5. The fact that an active quarry above the site was blasting nearby should have been taken seriously as it would contribute to slope instability. The footprint of the entire quarry should have been considered and not the specific blast point during any one time. The DoE’s Guidelines for Siting and Zoning of Industrial and Residential Areas 2008 (Appendix B) page 57 specify a minimum buffer of 500 metres for quarrying and on-site crushing activity.

We as Penangite are experiencing development perils such as floods and landslides whereby i guess the future generation will benefit as we have negleted development for the past decades.also wished tht only certain portion of city to be remain as heritage enclave while the rest to have mix low rise development.plus nature lovers pls allow dangerous old trees to be replaced by new.plan for the future.lets not be selfish.

The readers of this blog have all sucked into quicksand of landslide? All talks are now degenerated into speculative in nature, no facts pending outcome of investigation. BN-Umno find this a bliss to divert discussion away from national problems ahead of Budget 2018.

Zairil specifically counter what Anil has reported, so truth and myth still not clear to many.

Anil should counter back to show his credibility in reporting.

While we wait for this inquiry to unravel the truth & misdeeds no matter how long it takes, pray that no more landslides will occur in the interim which CAT Gomen & MBPP has to explain without anymore denials. Btw, any misdeed (like earlier approvals of projects near this landslide site) by the previous state gomen should be taken as an excuse (or cry baby of unfairness by authorities like DOE) to commit the same misdeed in situ knowing full well the danger? Isn’t it an irresponsible act with disregards for the safety of Penangites? Or is it more for… Read more »

Zairil Khir Johari has stepped down as Football Association of Penang (FAP) president, and Penang has relegated to the Malaysia Premier League next season. Not sure if Zainal Abidin will be retained as coach. Penang developers should sponsor the Penang football team, like the China developers sponsoring JDT team to success.

Clearly shows pg forum and ah pek tunglang jumps and blame development on hillslopes. Remember ” I told you so”. They just jump and for self interest and agenda and blame game.

Notice how on the first and second day, state government and MBPP vehemently disagreed that a landslide actually happened at the site! It gives me the impression that some of our high rank supposedly ‘public servant’ do once they reach their office is to ‘wash their hands’.

Dear Anil This is a geology related failure. The slope is too steep for weathered granite. The Engineer had to design without encroaching neighbors land, in this case the neighboring jungle. What the Engineers overlooked is the geological features that doesn’t know of the land owners. Furthermore, for such steep slope, soil nailing should have been done the moment each slope is completed. Waiting till all complete and the planning is just a gravely mistake. Please refer Paya Terubung failure. Several studies has been done by Geology Dept from UM, UKM and others. Wonder if any geological mapping has been… Read more »

We must look at the approved plans. Is there a retaining wall or a permanent slope with benching? By the look of steep slope and covered with plastic, it does not look like a permanent slope. This temp slope has been there for some time. The construction of a basement based on news written could make matter worse. Temp slope could only last a short time.

Those data could be available but the temporary slope may not have records or as built dwgs if it is temporary for formwork purposes. The back analysis has to do some guesswork on the cut slope and depth profile using data from the SI.

But the Penang development that got hit sits on flatter terrain (mild slope), just like Highland Towers. There are other condos next door, so are the Tg Bungah residences on the same gradient. The water run off came from higher up and not from this development downwards. Wasn’t it other development above the Highland Towers that caused the tragedy? Is there a PARALLEL? Identify the other development or the quarry activities above the Tg Bungah development and it’s effects.. Has the quarry operations adhered to proper water reticulation and hillslope mitigation issues? Who are the quarry operators since before the… Read more »

5 facts you should know about kapitalism: – In this religion, the faithful must exploit things and people to maximise profit at the expense of everything else including their compatriots, future generations and the biosphere. – No government is immune to subversion. Ordinary people from the “cleanest” countries will admit that corruption is present though at a low level. – Every case of waste, inefficiency, incompetence, poverty, disaster, and even crime is an opportunity for business. – Constant and widespread exposure and insulting of crooks has some chance of controlling them, but this is limited by globalisation. – The false… Read more »

About 87% of the original Ulu Muda water catchment (under 100,000ha as of 1969) has since been reclassified as for logging. This is the official figure. If you run out of water, you can drink timber or money or “development”.

Facts or opinion?
Let’s be clear.

Why DOE object to land reclamation? Our Engineer here tidak boleh pakai? The reclaimed land will sink into the sea? No it is the flora, fauna and narine. Similar to on land. DOE will leave slope failures to the Engineer who makes most noise here to ensure no slope failure using soil nail, retaining walls or ground anchors

Those two others are low-rise projects.

Assumptions to spin or to character assassinate?
What a cheap shot for more Komtar Dedak!
Get Real. zoro turned Shrek! Correction: Shriek!

With 12 billion in pm depth, ah pek will try his lucky strike. Ah pek now abandon his belum Valley. All his big talk on the rain man.

Pls try harder than before. Before your Komtar Dedak runs dry for all the useless shrieking!

If Peter lim’s, refrain. But if you need to use my notes to verify, by all means. Truth be known