Blog correspondent Michael Maguire reports on the the latest status of the erosion at the Tanjung Bungah Beach. Questions must now be asked as to the source of this erosion. Is it land reclamation (or some other factor?) and if so, what will happen when there is further land reclamation?

On 28 December, we went down to Tanjung Bungah Beach for a swim and I decide to do a three-month (exactly) follow-up on the beach erosion story (dated 28 August) which you blogged on 1 September.

The erosion, as predicted is now worse and has further eroded by an estimated few metres inwards towards buildings. Areas of the beach which were smooth in August now have abrupt banks up to a metre high.

Four Points’ so-called ‘private beach’ has been further eroded. Their volleyball post set on a grass ledge is now gone and the ledge has eroded away.

Where previously there was at least five metres of grass, there is now hardly a metre. Deep gouging out of sand has taken place where a public drain empties onto the beach. The row of small palms is now at the edge of a steep bank of sand and some small palms have been lost.

The loss of sand is shown in the photo taken of the beach wall of the newly named Sentral. Apparently, no effort has been made to fix the public access to the beach by the Sentral.

Note two new buildings are now underway. I thought the line of trees would be lost by now when I photographed them in August. I was almost right. They are now leaning over and their top branches are being buried in the sand.

I took the photos starting at the Four Points end of the beach and moved down the beach towards the Sentral. Photos have not been taken exactly the same as in August, sadly, but particular scenes can be recognised.

Given that all the sites along this stretch of Tanjung Bungah Beach are now fully occupied, it is disappointing to note that there is now no opportunity to develop a ‘green frontage’ or recreational park for the public to enjoy picnics on the grass under the shade of trees. Soon there will no natural shade from trees on the beach.

I wonder if any public access ways will be provided between these new buildings, or any public facilities like toilets be incorporated into these new obstructions. 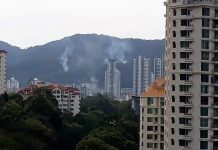 You might want to dig a little deeper to find out who OWNS the land. From what I understood, the Four Points hotel BUILDING is owned by TDZ’s wife. Not sure if it extends to the land.

There is a clause that guarantees public access to the beach but that’s a pretty vague term. The state should be more specific, i.e. no buildings/development within 50m..or something like that. Right now, the public will have to make do with the little alleyways leading to the beach.

The ADUN of Tanjung Bungah is a good ADUN but sadly this govt does not like to help even its own party representatives. When Jeff Ooi who is a PR MP complained about the haphazard conditions of the market and offered to help, instead of resolving the issue, they prefer to discuss on whether he was polite, moderately polite, rude or very rude and whether cat or sick cat (whatever la) is derogatory or not. As if that is going to solve the problems in the market. Today, Jeff Ooi is silent but is the condition of the market, its… Read more »

Now, to blame who is responsible? The angry sea tokongs, the Merc driving developers or whoever approved such seaside development. People want progress but not this kind of returns on development, most of which were planned & done ad hoc (without concerted, integrated planning, implementing & strict regulation) for the rich 1%. But the public beaches & seas are frequent family rendezvous on weekends or late afternoon. How long will this state of eroding beach comes to no beach at all in Tanjung Bungah? We walkie-talked highly as far as Putrajaya about Penang’s progress, but we can’t even manage well… Read more »