Scars and brown patches have pockmarked the face of Penang Hill – evidence of illegal land clearing on the hill. The bruising is evident as you approach the island using the atrocious skeleton ferry service under the now privatised Penang Port. 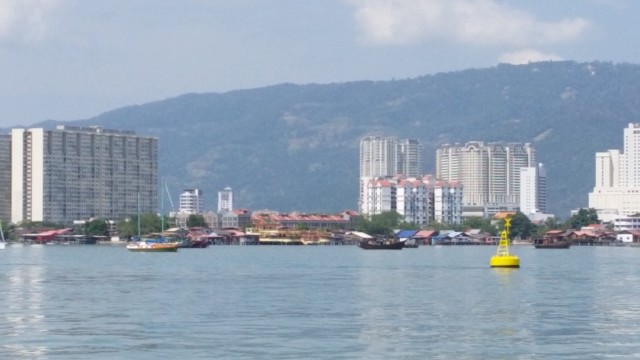 I had the misfortune to be on the ferry, Pulau Angsa, built in 1980. For some reason, the ferry that day moved at a glacial speed, making many passengers and commuters late for their appointments – a journey which once used to take 13-14 minutes took more than half an hour that day, last week. And that’s not counting the waiting time for the ferry.

But the painstakingly slow ride afforded me a good long view of Penang Hill. Through the haze, I was horrified to see the scarring of Penang Hill, the once lush and verdant shroud of forest now battered and bruised.

A generation ago, we had a fast and frequent ferry service (most times you only had to wait a few minutes for a ferry), little or no queues at the ferry terminals, clear skies and a lush green Penang Hill, which rose majestically at the centre of the Island.

Now the ferry service has been run down (only one to four ferries operate, just one at night including during peak holiday seasons, and no ferries after 1.00am), so that waiting times have soared. If the next ferry that arrives is full, you are in for an even longer wait.

The ferry service under Penang Port Sdn Bhd, controversially privatised last year to Sea Terminal Sdn Bhd, linked to Syed Mokhtar Al-Bukhary, is a far cry from the superb service during its glory days. From the mid-1970s until the old ferry terminal on the mainland collapsed in 1988, about a dozen ferries plied the channel, the waiting time rarely more than a few minutes.

The old ferry terminal was never rebuilt, allowing the Penang Bridge, completed in 1985, then under the politically connected UEM, to collect even more tolls from motorists who opted for the bridge rather than wait interminably for the reduced number of ferries at the remaining newer terminal.

What a betrayal of the people’s interest! The ferries could have played a vital role in an integrated public transport service. If commuters could travel straight to George Town, it would reduce congestion on the first Penang Bridge and whittle away the bottleneck experienced by motorists as they approach Weld Quay after exiting the Jelutong Expressway.

A seamless one-ticket operation between the ferry service and Rapid Penang, which has expanded its bus terminals at the ferry terminals at Weld Quay, could have encouraged more people to use public transport.

What we need is not decision-making at Putrajaya or Bukhary’s Sea Terminal but a state-level Penang Transport Authority. The Penang Bridge should come under such an authority and profits from the bridge tolls should go to improving public transport in the state. We missed a golden opportunity to create a rail link when the Second Penang Bridge was constructed. Unfortunately, a short-sighted vision of collecting even more tolls from motorists trumped the longer term necessity for more sustainable transport options.

Back to the present, a haze envelops the island most days now, and Penang Hill looks as if it is covered with sores and gaping wounds. Quite unlike the clear blue skies and lush green hills of the past.

This is not nostalgia for a long-gone era. This is a distinct drop in the quality of life over a generation. Somewhere along the way, we have lost the plot.

Sia Boi Prangin development in the way. This could revive interest on ferry services?
Anil may want to update readers of that modern space craft design building has been approved for Sia Boo heritage centre? So many new museums in the island now, but the best living museum being the fading roadside street hawkers?

Don’t get me started on that spacecraft building 🙁