Media reports have been full about the scarring and blasting at quarries in Batu Kawan which have alarmed nearby residents.

At the same time, over the last couple of weeks, the pile of rocks at the fishermen’s jetty in Bagan Ajam has grown higher. Where are these rocks coming from? 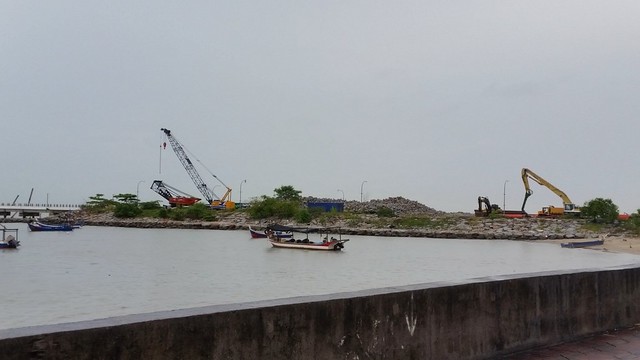 This was what the jetty looked like a couple of weeks ago (see below). Compare it with the photos above. See how the pile of rocks has grown since then.

Meanwhile, residents of Batu Kawan have been alarmed by massive rock blasting.

What are the Batu Kawan rocks being used for?

Obviously, the rocks at the fishermen’s jetty in Bagan Ajam in Butterworth must have been transported there by lorry. But where did the rocks come from?

Are these rocks at the jetty destined for the Seri Tanjung Pinang Phase 2 and Gurney Drive land reclamation? If so, under the detailed EIA report (see extract below), the 2m tonnes of rocks required have to be obtained from Tanjung Hantu in Lumut and Batu Maung quarry. And they have to be transported by barge, not lorry. But who is checking on this? 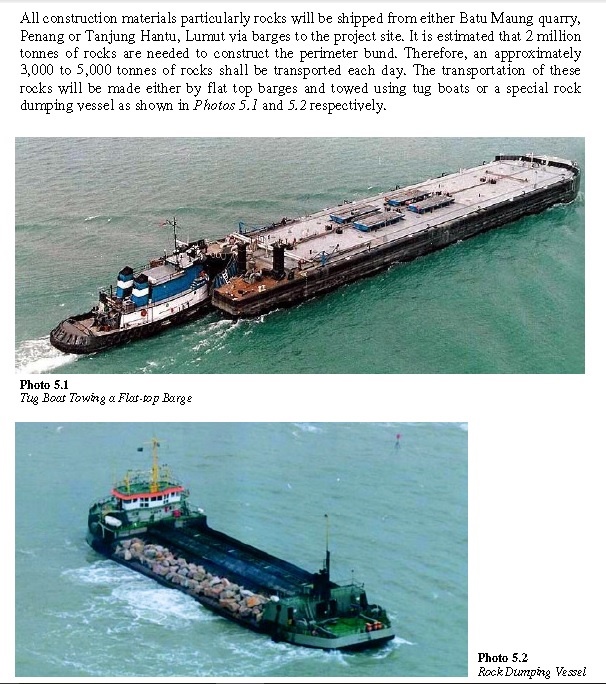 As you can see, even the types of barges that should be used are shown.

So here are some questions for the relevant authorities:

Bear in mind that safety considerations should also be an issue as the lorries have to enter a small road in a residential area to get to the fishermen’s jetty. The jetty lies just in front of 10 blocks of low-cost flats in Taman Tun Dr Awang, which are already looking run down (except for only three repainted blocks) as it is.

Last weekend I was at JB’s iProperty.com Fair where I witnessed the mocked up models of the Hatten’s Malacca’s mixed development including an artificial island is so massive that what you have in Penang pales in comparison.

Hatten’s CEO is a young chap Colin Tan … a crony(?)

Check up Hatten’s Harbour City in Melaka, much bigger scale than The Light of Penang!

China property bubbles may spill over yo Penang causing more tragedies not just the speculative commoners but agre$$I’ve developers/agents???

Penangites should visit Singapore to appreciate how low is ringgit.

anil you left out permission from rajah polisi. otherwise few toll booths along the way

Talking about rocks, tomorrow 30 Sep Komtar expected some rocky moments for LGE. Anil may confirm and report live after Friday’s prayer as Sia Body may see big gathering. Some say whistleblowers like Ah Soon and NiaoKongPhobia-lang to be there as well. Readers do stay tune for rockie updates from Anil!

anil you allow vulgar and swearing southern fujian also known as minan words in your blog?

let’rock is what they swing the buttocks like red army. not happy throw rock. lucky them the blasting contractors have plenty leftovers to pick n chose

K.N.N. Lu kong ha mi L?
Don’t simply shoot … like an idiot Digimon!
Such Komtar Dedak Addict with no principles but lies as good as Niao Kong to create hatred.
Karma is watching you!
Nyiamak…

My Butterworth friend told me it could be the construction of a Hard Rock Cafe/Hotel.

Err, are you serious?

Finally we are seeing development on the mainland side of Penang?

Lately Anil has extended his influence to Prai. More readership soon from the folks of Butterworth?

An investigative reporting by Anil?

Must probe further, else will lose credibility as just sensationalising an issue…