The RM7.3m tender for the road-widening work was awarded in April 2012, but the MPPP only invited NGOs for a ‘consultation’ on 30 November, just days before the trees are to be removed. 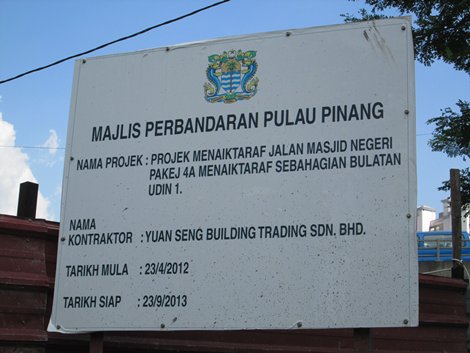 Here is the MPPP’s announcement of the successful tender bid for the RM7.3m project earlier this year.

A local NGO has written to the MPPP complaining about such shambolic consultation:

Objection to cutting or shifting of trees in Jalan Masjid Negeri

CAP is shocked to learn from press reports that the MPPP is intending to commence work on Monday on its plans to widen Jalan Masjid Negeri and eliminate some 62 trees in the process. It would appear that the date of commencement of the works has been deliberately brought by the authorities as originally it was stated that the work on the project would only begin on or around the 13th or 14th of December 2012.

The indecent haste with which the whole project is being pushed through despite public protests shows a complete disregard for public opinion. It also confirms CAP’s view that the dialogue held on November 30 by the MPPP’s engineering department with NGOs was a mere sop to assuage public concern after the relevant contracts to proceed with the work had already been signed and sealed. This is not public consultation in any meaningful sense.

If the authorities believe that by railroading the project and presenting the critics with fait accompli, they can put an end to the whole controversy, they are sadly mistaken. Such conduct will only erode public confidence in the workings of the MPPP and its crediblity. Such a bureaucratic way of resolving a matter of public interest will raise serious questions as to whose interests the MPPP is serving.

We therefore urge the MPPP to postpone the commencement of the works to allow for a fuller consultation on the matter. The authorities must take environmental matters more seriously instead of brushing them aside as a nuisance. They must constitute a central concern in any development plan.

We look forward to your immediate reply.

Perhaps clean-fuel mini-buses, bikes (of all kinds) should be the 2-year experimental solution, instead of cutting down nature;s shade. There is no end to vehicles on byways which have turned into highways, originally for horse-carts (beh-chia).

Too bad it all started with Speedy Gonzales Penang Hill Fridge Train. The impatient attitude on the road is also to be blamed for the wildebeest stampeding style of driving & riding thus creating a voracious need for more wider roads & highways not unlike the wide open plain of sweltering hot Serengeti, Kenya.
This is no cosmopolitan of the educated & cultured!

everything is so fake in pakatan except PAS hudud and PAS islamic ruling for all.

It is sad that MPPP hasn’t changed much since 2008

Finally they are doing something to improve traffic conditions alomg that road. After consulting with penangites, it is clear that the majority have given their thumbs up for this improvement.

Finally Anil has woken up from his dream! What consultation? But any how lgE will be defeated soon in the coming election. PKR is losing stream too fast too soon, it will leave DAP Penang to win big in the election. Penang DAP will only learn any lesson after it win the election without PKR. I foresee lgE will be totally humiliated when he win big but unable to become CM anymore. This road widening episode will be remembered for years to come when people think of how lgE win Big but lost the state government. lgE will be remembered… Read more »

you better go for a check up, your illness has gone from bad to worse..

Yet another Tanaka-Mahathirism in practice.

I would like to bring this video to your attention. Thank you

Whither Transparency and Accountability? Whither Freedom of Information? With public consultation reduced to a ‘shambolic exercise’ by both the state government and the supposedly independent MPPP, we are undeniably heading towards (another) authoritarian (and slippery) form of governance. This for me, is the fundamental issue here (I voted for CHANGE). Consequently, environmental and social issues are automatically reduced to insignificant piddlings by virtue of these genuine concerns being artfully sidelined during the supposedly consultative planning process.

Why Lim Guan Eng still quite? Why don’t he open up his damn mouth and say something…

I want to remind all readers that this is LGE administration. LGE is Penang CM. LGE is from DAP and DAP is part of pakatan. LGE has the ABSOLUTE POWER to stop all these problems. Anwar is the supreme BOSS of pakatan. Anwar can stop these problems if he wanted. So, anil and co., pick up your phone and call LGE now. Tell him not to chop down many many many many trees. If LGE is TOO busy entertaining DEVELOPERS MEETING, then you can try contact ANWAR instead. So, don’t blame Gerakan/BN for all these problems. Now we can see… Read more »