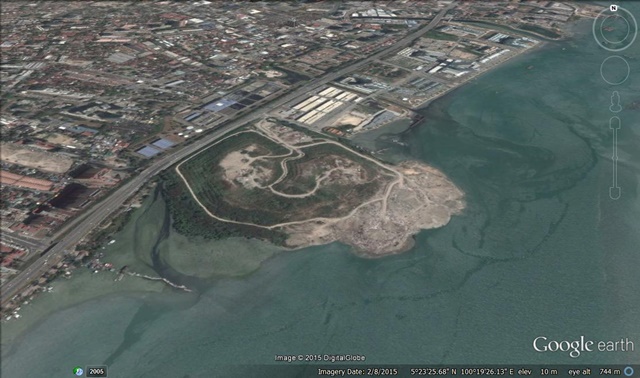 Penang has a Penang Science Council, the Penang Green Council and the MBPP. Then we have the Department of the Environment and the state government’s think-tank, Penang Institute.

Did the Penang Development Corporation consult any of them on the environmental implications before it came up with its request for proposals for the redevelopment of the Jelutong dump site, which would very likely see developers submitting plans for commercial and residential property development.

It is astonishing to read that the PDC is asking for proposals for the development of the 53 acres of the Jelutong dump site.

It was also reported that an ExCo member of the Penang State Government said that the value of the land would be about RM500 per square foot as land next to it had been transacted at RM1000psf. Presumably, the development of the dump site would be for residential and commercial development to command that kind of price.

The PDC and the state ExCo seemed to be very poorly advised by their experts. This call for proposals seems to be completely ignorant of the environmental and health problems associated with the development of landfill sites in other countries.

The proposal seems to ignore the dangers of hazardous and toxic material in dump sites. All kinds of solid waste have been dumped in the Jelutong site to way above its capacity which is why the dump site is higher than the surrounding areas. It is unlikely that any systematic record had been kept of what is in the dump site has accepted.

All kinds of rubbish must have got into the site as there had been no requirement for separation of waste in Penang and the rest of Malaysia. Toxic metals such as lead from batteries and electronic products had been put into the dump. Pesticides and other insecticide must have also got into it. It is not known what kind of carcinogens (cancer-causing chemicals) such as PCBs and dioxins are in the dump site. Recently, more inert material such as construction waste has been dumped at the Jelutong site.

Rats, flies and crows had been observed in the site. It was the practice to use pesticides to kill off the flies. Foul smells are regularly emitted from the dump site.

The dump site also regularly catches fire in the 1990s till very recently.

The Jelutong dumpsite does not have any leachate treatment and the leachate drains out of the dump site and this has contaminated the sea water as well as the ground water.

Another well known hazard of landfill sites is the production of methane gases from the decomposition of the organic matter. Methane is highly inflammable gas and can even explode when it reaches critical amounts. This the reason why pipes are inserted into dump sites to allow for the release of methane.

Because of the environmental and health concerns, environmental protection agencies all over the world are against the use of old dump sites for housing and commercial development. In many dump sites, sink holes have been reported after a few years. It had also been reported in different countries that even after 15 years, food remains are still not completely decomposed.

The most common use of old dump sites is for parks and recreational use. In fact, there had been a suggestion that the Jelutong dump site be made into a public park a few years ago.

PDC should have done some background research on the environmental and health hazards of the use of dump sites before asking for proposals for development. It may be able to sell the land for large sums of money but it is sure folly to embark on this kind of redevelopment.

Methane can fill up hot air balloon to rise at Jelutong dumpsite another tourist attractions?

Can harness the methane for use as cooking gas?

tunglang
Reply to  Kim not Gary

When Money Talks Louder, Brains Get Cemented (i.e. brain-dead), Ears Drop Off (deaf to public outcry).
This is an inevitable public medical report on CAT or more precisely that Niao Kong.

Hey, Mercedes. Why the need to public-sound-proof your marques?

Landfill DANGER: 1) There are over 10 toxic gases released from landfills, of the most serious of which is METHANE (a combustible gas). Methane gas is naturally produced during the process of decay of organic matter. As methane gas is formed, it builds up pressure and then begins to move through the soil. In a recent study of 288 landfills, off-site migration of gases, including methane, has been detected at 83% of these landfill sites. Methane is a more potent greenhouse gas than carbon dioxide. Studies have shown significantly reduced height among children who live near Love Canal, the chemical… Read more »