Here it comes. A groundswell of protest is building up against the extravagant plan for an RM8bn 19.5km six-lane highway, which will mar the beauty and tranquility of the Sungai Ara Linear Park and the Penang Youth Park and affect hundreds of homes and businesses on the island.

These are ordinary visitors to the Sungai Ara Linear Park, from all ethnic groups, who are protesting. In the ‘new Malaysia’, these citizens, newly empowered, are not shy about speaking out and taking a clear stand for what they believe in. 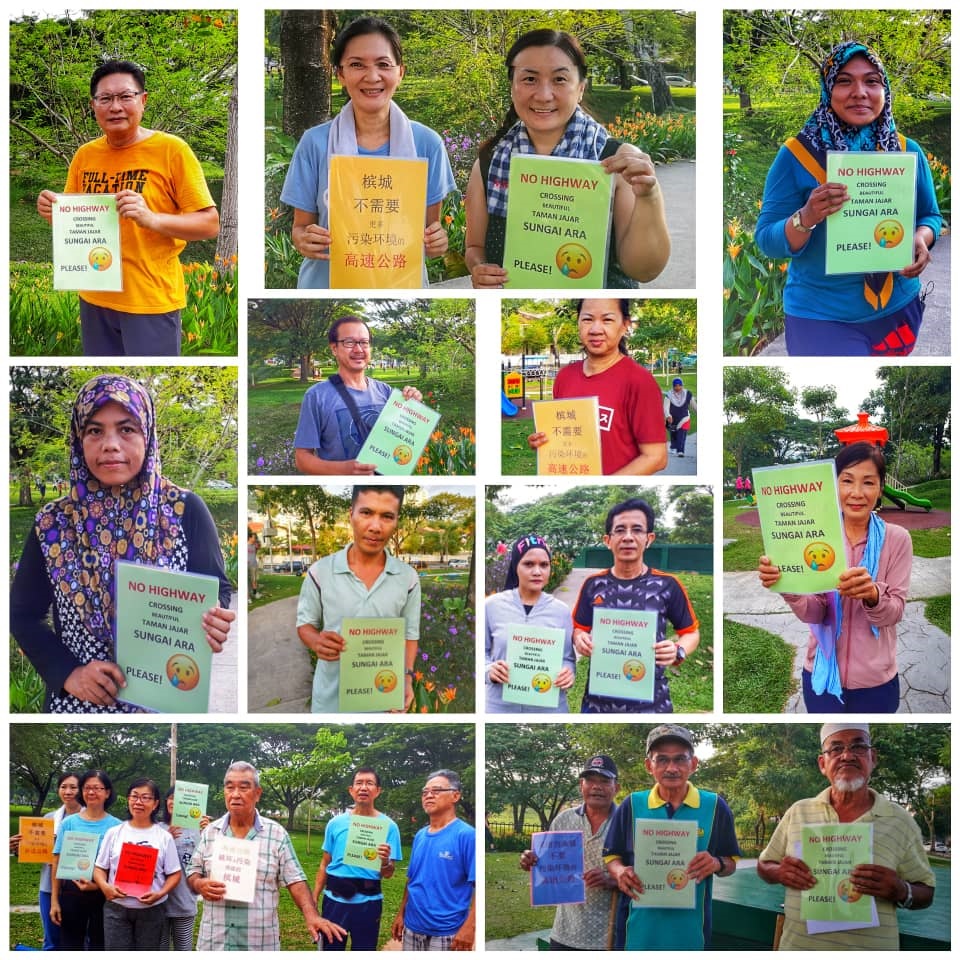 Word has got around and residents groups, not only around the two parks, but across the state are starting to campaign hard against the mega highway. These Penangites want the project scrapped and the funds used for better public transport. They also want the SRS shopping list for mega transport infrastructure to be reviewed by renowned independent global experts in sustainable mobility. They are sure that the highway won’t solve the congestion problems in the state.

The campaign, from what I hear, has only just begun, and my hunch is that it could get bigger than the anti-Penang Global City Centre campaign in 2007 and the Save Penang Hill campaign around 1990. 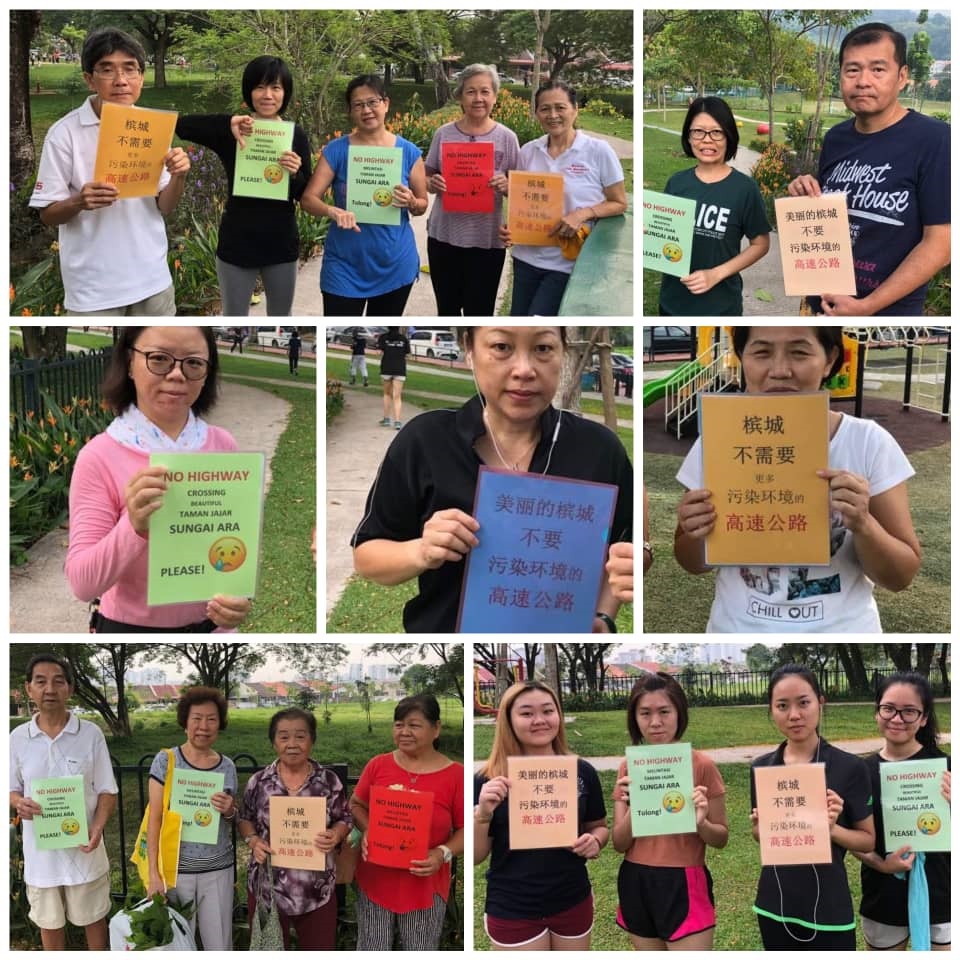 The Penang Youth Park is a treasured landmark in Penang, and the Sungai Ara Linear Park itself is one of the best parks in the state, its river so clear that fish can be seen swimming in the water. It even won an award for the cleanest river in the country. The residents are rightfully proud of the park. Together with the City Council, they worked hard to transform the park from abandoned land to a lovely oasis in the midst of a concrete jungle. 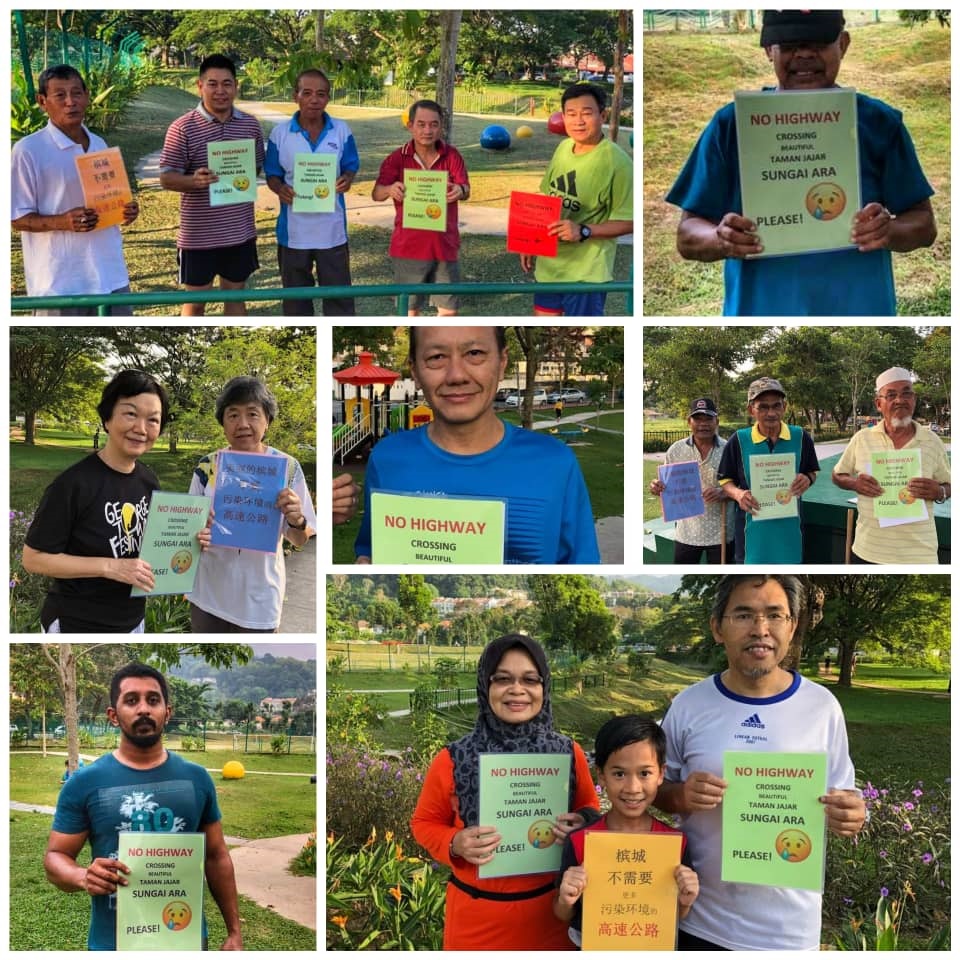 But now with this mega highway plan, the consortium even wants to straighten the river banks and put heavy pillars along them! I tell you, some of our planners can’t bear to see such open green spaces and oases left untouched. They have to put their concrete monstrosities over it.

Still, when women and men get involved together in large numbers, they are not likely to let up so easily in their campaign. Stay tuned.

Instead of protesting, they should advise the local government to learn from Singapore’s HDB Biophilic Town Framework, where greenery will be incorporated in a more deliberate way than before, using the landscaping to provide not just green spaces, but also to enhance the natural environment and the well-being of residents.

It will be more meaningful if these people could pledge to stop driving and to take public bus.

Good argument. So many cars already on Penang roads. If not taking bus, more will buy cars and further congestion the road.

I share your view.
Sad that the beauty of Penang island is marred by Hugh car population on the road.

They are hypocrites, unless they do not drive on Penang roads!

They can drive but want you to take bus.

So action on this but why no action on F & M foot n mouth disease. If get contact, see how much they can talk and walk

Shriek should try the traditional remedy of herbal drinks to avoid HFMD.

Fear not. Efforts to get Penang Hill and its surrounding areas de­clared a Unesco biosphere reserve are in the final stage.

The Penang Hill Corporation general manager said paperwork for the application would be handed over to the Water, Land and Natural Resources Ministry by next month, ahead of the September submission deadline.

Why risk a UNESCO heritage opportunity for Pulau Jerejak & go for the fleeting development of no long lasting value?
Pls no more blame game, exercise strong political will.
And don’t threaten us with insane compensations to developers.

“mar the beauty and tranquility”

Taib Mahmud cleared of all wrongdoing by AGC: Liew
https://www.malaysiakini.com/news/435025

This Pek Moh’s wealth is disproportionate to his entire salaries as CM of Sarawak.
It is disappointing that a bigger shark than Naik Jeep is never cornered.
An alleged bigger shark during Mahathir’s ruling.
Is this a selective law + order?
Or fearing catching this bigger shark will open its belly to an oil drum of worms of implications during Mahathir’s era?

What does Pek Moh got to do here?

Before we exhilarate our egos over mega projects like the Forest City (linked to bilateral corruption?), read this: Jho Low And The China Issue https://us2.campaign-archive.com/?e=28802cee2d&u=57b26bbe9d2acafa19363b0d2&id=db6bd56f2e They seek him here and they seek him there, but best bets are back on China. Indeed, earlier today, a Hong Kong radio station reported that Jho Low had most recently fled back from Hong Kong into China, where it claimed he has now been detained pending Dr Mahathir’s visit next month. Certainly, Malaysia’s newly reinstated veteran leader has made clear he is champing at the bit to get to see the Chinese President, since… Read more »

Ladies, can you spare some time for that poor little 11yr old please

From timber to oil, Sarawakians can only stand by & watch the leeching by Pek Moh. HARAPAN is BUT only a false hope in its attempt to win the hearts & minds of Sarawakians.
Pls try harder HARAPAN (PALSU)!

High time to express our concerns & displeasure at the unpalatable state of frenzied development ‘amen’ by state gomen even a beautiful river bank will not be spared!

CM Chow, we hope you have not inherited (yet) the past arrogance of state management.
Remember the past floods of September & November? Now is July. Be prepared.

Penang Chief Minister Chow Kon Yeow has urged locals to appreciate Penang Hill, saying they should visit the park which boasts of a virgin rainforest that dates back to 130 million years. “Penang Hill has its natural, historical and heritage values which we often feel are not important. “Penang Hill is important for Penang, and I hope all Penangites will always come to Penang Hill to appreciate the natural beauty here,” Chow said at the launch of the inaugural Penang Hill Festival, which will run until July 29.