Things are not looking good for the coastal waters of Penang, what with high contamination of heavy metals, even a dead zone, at Teluk Bahang and the proposed massive reclamation off the southern coast of Penang Island. And we haven’t even talked about the dumping of imported waste. It is all shaping up to be an environmental nightmare.

Here is Prof Aileen Tan, the director of the Centre for Marine and Coastal Studies of University Sains Malaysia, addressing the pollution in the northern waters:

On top of the 45 NGOs who had endorsed an online petition to scrap the land reclamation, another 45 NGOs, some of them fishermen’s groups, are planning to send a joint memorandum to Dr Mahathir Mohamad urging him to scrap the reclamation.

As I mentioned a few months ago, the groundswell against the reclamation is slowly but steadily building up as more people become aware of how environmentally damaging the massive reclamation and proposed transport infrastructure are.

Here is a press statement from Sahabat Alam Malaysia:

Penang’s fisheries and fisherfolk in jeopardy

The fate of more than 5,000 fishermen in Penang is in critical condition following ongoing and proposed reclamation projects and the increasingly serious marine pollution problem in the state.

Although the problems pervaded by pollution and coastal development have long plagued fishermen’s livelihood, they have not yet received proper attention from the state government or the relevant departments and agencies.

Commenting on the issue of pollution reported in the Star of 28 May 2019, Sahabat Alam Malaysia (SAM) is very concerned because Penang’s waters are not only threatened by pollution from solid waste, factory waste, sewage, mud and pig waste but also chemicals that are poisoning and killing marine life and potentially affecting public health.

According to an analysis of water samples from Teluk Bahang coastal waters two weeks ago by the Department of Chemistry, University Sains Malaysia (USM), the nickel content was 944% more than the standard 0.005 parts per million (ppm) in typical sea water. Lead and cadmium contents were also reported high at 0.804ppm and 0.065ppm (standard = 0.002) respectively.

The public and fishermen whom SAM met were surprised by the report on the heavy metal pollution in the waters off Teluk Bahang. They hoped that immediate action would be taken by the government to control the pollution from spreading and causing further impacts to the marine environment, fishermen’s livelihoods and public health.

Consumers have also contacted SAM to find out whether it is safe to eat fish caught in this area.

SAM’s survey over the past 10 years has found that fish, shrimp, shellfish, cockles and crabs – which are the main catch of coastal fishermen in the state – have dwindled and are threatened with extinction. The fishers’ income has also declined between 50% and 70%.

SAM is disappointed that the relevant departments and agencies had not disclosed the level of marine pollution in Penang’s waters. Hence the public’s query of what the authorities have been doing is warranted.

SAM believes that if the state government, departments and agencies involved are lackadaisical over environmental issues and its effects on the livelihoods of coastal fishermen in the state, not only marine life will be extinct but even fishermen and their generation will gradually vanish in the future.

Thus, SAM urges the Penang state government to address the pollution problem promptly by identifying the sources of pollution and cancelling the sea reclamation project proposal that would result in total the loss of fishing grounds and threaten fishermen’s livelihoods. 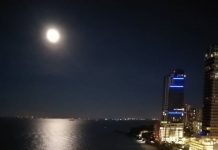 Nickel tainted fish at Teluk Bahang a doom to Penang coastal sea fishing. The fish in controllable water tanks may be the future venture to prevent irresponsible contamination? KuihKau Fish species oredi a history like Rhinocerous Tham, only those from the past era can recall their abundance along the coast. No hee hee laughing matter but shriekingly frigtening the prospects.

Learn from Singspore high tech fish farming (Apollo). The technology has been exported to Brunei:
https://www.straitstimes.com/singapore/high-tech-fish-farms-coming-up-in-lim-chu-kang

Too bad, peng land only good in following. All taleNTS migrated. Tu lang and susu Teh not shrieking at lost talent and what is peng land science uni is doing.

If not of pig farming, today have to go jungle to hunt the wild boars for pork. So fish farming is for the future.

Past is past cannot be reversed. Past uncle Sam is most powderful but now weak consume fish consuming too much sludge

Wei and Shriek logic: Do you consume fish, Anil? If yes, quit talking about anything. They have bloods in their hand if they proceed with all these nonsense.

Those fish fed on sludge and human waste discharged to the river then to sea. Can carry disease like hepatitis!

This is what susu teh miss

Give fish stock a chance to recover in oceam so eat less fish or meat. Kindly view videonon how to do it.

Now fish sold in market very small size.
Let the fish grow to multiply.
Don’t kill the goose for the eggs.
Otherwise future can only eat mock fish like the vegetarian dish.

Another idiot lIke what tu Lang used to say. Source of heavy metal is unknown. Culprit could be preparation of bubble Teh. Peng land can be iron man result if consuming heavy metal

better reflect on decades of indiscriminate and over fishing by fishermen that result in depletion of stock rather than blaming on every other thing….hehe

Don’t arrogantly teach the fishermen how to fish for more (in deeper, dangerous waters).

Calmly teach thyself to appreciate what thou already have (fish, shrimp, shellfish, cockles and crabs) though in dwindling supply caused by irresponsible quarters.

And humbly let the fishermen teach you how to reverse the threats to their sea environment & thus to recuperate + increase marine life.

So, your Chow Chow will teach you how to sapu all the sea space for reclamation?

Tu Lang, show us the missing sea space. The sea space is still there now relocate to near shore. Dude.

if “sapu” for the benefit of all penangites, why not ? much better than sapu to fill fisherman’s own pocket only…

Clearly another idiot. Why no shrieking at japs who fishing sperm whales giving excuse in scientific reaearch. Whales are declining and European countries agree to stop

You really care? I don’t think so. Shrieking at every opportunity to spin? Go get a life!

Some fishermen sell the subsidised diesel for profit. Like that sure no fish.

The same is happening in Jawi/Simpang Ampat on the mainland. Despite years of complaints by residence, the State Govt is deaf and dumb on the pollution caused by the industrial and poultry industry. Traditional open farming methodology and the flagrant discharging of effluence into the numerous tributary that flows into Sg Jawi and subsequently into the waters of Pulau Burung and Batu Kawan is a environmental disaster waiting explode.

What’s your problem? Shrieking at every opportunity to spin? Go get a life!

Malacca Strait, Suez Canal and Panama Canal are ideal for dumping the most poisonous solid and liquid wastes. If an enforcer stops a ship, it can (a) claim to be taking the waste elsewhere if still on board (b) blame other ships if it has dumped it. And you thought caring democratic governments and an “international order” were managing the world for you.

Why tu Lang and susu teh not shrieking at ships passing through the straits and dumping the waste?

What’s your problem? Shrieking at every opportunity to spin? Go get a life!

“Malaysia may have no more fish by 2048 – a mere 31/2 decades away – if fishermen continue to utilise illegal and destructive methods to fish. This dire warning was made by Fisheries Department director-general Datuk Ahamad Sabki Mahmood recently, but most Malaysians appear unfazed. Ahamad said local fishermen using the banned pukat rawa sorong (drag nets) are trespassing into fish breeding areas meant to boost fish population. Such an invasion has seen the fish population declining rapidly in the past 40 years, from 2.56 to 0.21 tonnes per sq km.” That was 2012, good luck to our fishing community..you… Read more »

Good for fish die first before we eat them.
Otherwise we get the contaminants too.

What makes you think the food you eat is safe? Some of the fish sold are dead fish; that happens when you keep tyrannising fishermen and other poor people. The preservatives include formaldehyde. Even expensive foreign fish is couloured red, orange, etc. Shellfish absorb the most pollutants. Fish farming requres the heavy use of medicines, some of which can even cripple you.

Also one can find plastic inside the fish belly. What about those dissolved in water. Still want to eat fishes?

But tu lang and susu teh don’t care. They miss fish and want to eat them