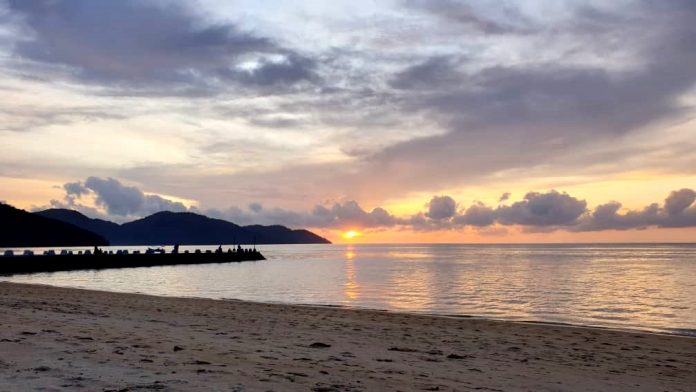 …pinch your nose. The beach was so stinky today, complains one Penang resident who took an afternoon stroll today.

“It was a hot afternoon and it was low tide. Not sure if it has anything to do with all that’s happening in Teluk Bahang today.” 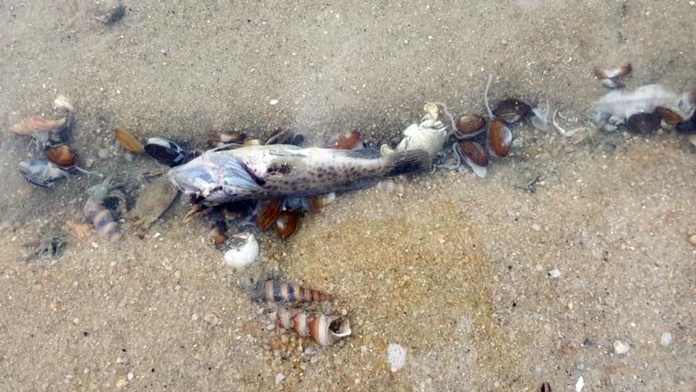 “Water was visibly okay, the usual, but underneath the clear water were all the dead clams, fishes, crabs, starfishes… all lifeless and washed up by the tide to the shore. The crows were feasting on the beach.” 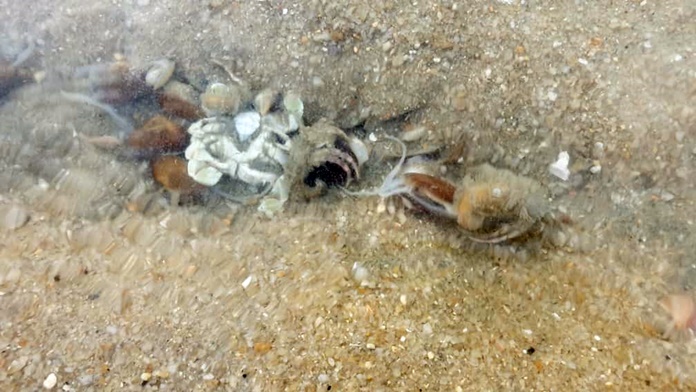 Here is some of the sludge elsewhere in Batu Ferringhi:

Stinky beach along the northwest of Penang Island – and swathes of red sea apparently spotted by a fisherman around the Batu Maung area in the southeast of the island yesterday morning.

What is causing this red sea in the southeast? Is it a red tide phenomenon (seen in Sabah), something to do with land reclamation or construction activity, illegal dumping or some other cause?

And now dark waters are approaching Tanjung Bungah along the northern coast of the island: 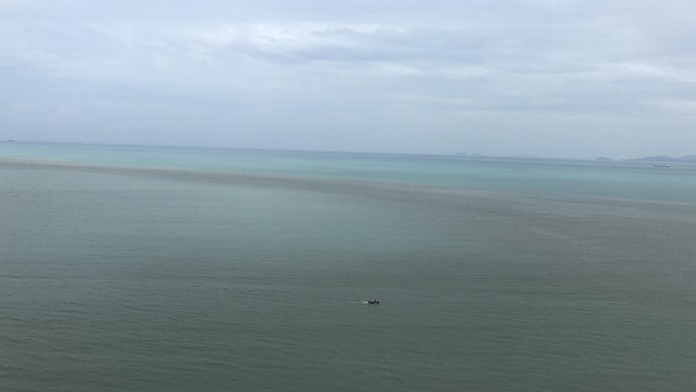 It is a coastal and marine ecological disaster zone in the waters of Penang right now. Whatever the cause, you’ve got to feel sorry for the marine life, which is suffocating with low levels of dissolved oxygen, silt, sedimentation, ammonia and nitrate, the works. No wonder the fishermen are so upset.

And don’t forget the people of Penang who rely heavily on fish and other marine food, the price of which may climb as supplies grow scarce.

This comes at a time when the government is trying to boost food security by trying to reduce our reliance on food imports. But how to succeed when overdevelopment at all costs is posing such a huge threat to the ecological balance in Penang?

What will this do to the tourism sector in Penang?

KUALA LUMPUR, Aug 28 — The Christian Federation of Malaysia (CFM) today implored government leaders to rise up and spearhead a concerted effort to stamp out extremist and religious rhetoric in the country.

Anil appears stressed out by environmental matter these days, should relax and go enjoy Penang Street Food to sustain with food-energise outings as recommended for you and readers :

Be shrieked out with hee hee haha of food fun but do exercise afyer those mesls.

Well, I took a break to enjoy Siam Road char koay teow. Long queue! But worth the wait.

hehe….the “she” probably has been looking for a dead fish for numbers of days and finally she did find a dead fish…God know what will be “discovered” by a “he” next day………BTW, tourist arrival has been growing to the extent that our airport no longer able to cope with the traffic…

Dear Anil,
Please help to publicise SEKAT:
https://www.themalaysianinsight.com/bahasa/s/178282
We do not need to burden our children with Khat or Jawi. Let them learn Bahasa Malaysia and English with no interference.

It may well be the modern time ‘Sook Ching’ of our Penang marine life! ‘Sook Ching’ in Chinese means ethnic cleansing during the Japanese occupation of China & Malaya during WW2. Coincidentally, Batu Ferringhi was one of the 5 places of mass graves for people beheaded by the evil Japanese soldiers. Buried in the sandy golden beaches or simply thrown into the sea, these beheaded bodies & heads were never recovered. Every year during the Hungry Ghost Month, the locals would prepare a big feast & opera show at Teluk Bahang near the previously End of the World Seafood Restaurant… Read more »

hehe….enough of your ghost stories lar….you eat fish or not ? you eat fish then you are accomplice to sook ching lar…somemore want to pay cheap cheap for the fish…LOL

Maybe we can invite the very civilized Japanese – who deny imperialism – to watch this as tourists in the coming VMY.

Why not? The Taoist priests with the help of Penang paranormal teams can organise a ‘Watch Tham Chiah Kui Feasting’ X-perience during Hungry Ghost Month for brave tourists to see the disembodied. A fee to be collected & used for charity, merit prayers & food expenses for the hungry ghosts. Only one caution: Once these disembodied see eye to eye (contact) with any human, they immediately know that human can see them & may get attached to him / her. Not a he-he-he matter! Or worst if a tourist who sees & gets frightened & shrieks, not one but a… Read more »

We need a thoughtful & caring government. No sugar coated analysis of our lack of food security in view of climate change, deforestation, reclamation and corporate driven plantation, first in rubber, then palm oil and now Musang King. I just came back from a tour of Eco Destruction of Banjaran Titiwangsa, shocking. Too long to write here … another article

Palm oil growers should switch to vegetable and fruit farming, so that we can cut down on imports. Oil palm has no market now that the Europeans do not need it for biodiesel, let alone as a substitute for olive oil or butter.

Learn from Holland and Taiwan on traditional farming to cater beyond the neefs of own market. Also learn from China, Israel and even Singapore on high tech farming so that we depend less on expensive imports now that ringgit practically no ooomph.
Rubber prices crashed decades ago. Palm oil has little market overseas especially in EU despite a year of promotion by crudader YB Theresa Kwok. Palm oil plantation should make way for fruits and vegetable plantations, even in Borneo for orang utan and pgymy elephants to coexist in the natural habitat.

hehe…the rubber and palm oil industry once the major drivers of economic development of the country now made to sound like some kind of mafia business by the “thoughtful” and “caring” tree hugger….

On one hand, Whites are trying to displace “tropical” oils with their unhealthy alternatives – from extremely destructive crops. On the other, Bolehland and Indonesia are trying to outdo them in propaganda with vague claims that they have strict (unspecified) controls and will (in future) limit the total plantation area.

Anyway, the local emperor seems to find it more important to give asylum to a rabid provocateur and escapee from justice, even at the cost of making the police look powerless and losing access to our second-largest market.

Our Palm Oil salesman minister Teresa is extolling the benefits of red palm oil to us without making effort to reduce its retail price. Our grocery money is already too tight even to buy minyak cap pisau or cap buruh.

Malaysia produces only 48% of the vegetables it consumes, making the country over-reliant on imports.

Teresa Kok must convince western master chef like Gordon Ramsay and Jamie Oliver to use palm oil in their cooking in order to promote the oil.

Maybe Malaysia could sponsor foreign cooking shows to use palm oil. No point keep asking the locals to use it!