Without much fanfare, new Chief Justice Arifin Zakaria has made a few positive statements – but will they lead to a cleaner and more independent judiciary? 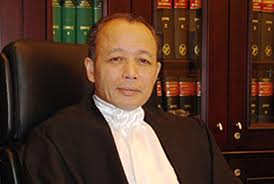 A week after Anwar’s acquittal put the judiciary in the spotlight, Arifin, who took over as CJ in September 2011, called for the independence of the judiciary and said that judges must be truly independent from all interferences, including from their friends and other judges. “Appellate court judges and Federal Court judges cannot influence the decision of a magistrate. Nobody at all, even the Chief Justice cannot talk to the magistrate,” he was reported as saying.

The Bar Council has applauded this reminder to judges to uphold the independence of the Judiciary and reject interference of any kind.

Arifin, 61, also announced that judges of higher courts would now have to declare their assets. The MACC would be called in to investigate allegations. This looks like an indirect way of weeding out any corrupt judges.

The new CJ also wants a minimum five-judge quorum to hear all Federal Court criminal and civil appeals. Senior lawyer C V Prabhakaran, a member of Anwar’s team of lawyers, sounded upbeat about this move. “Arifin is a very able judge and this move will reduce the possibility of judges being influenced by others,” said Prabha.

Yet another progressive statement came from the new top judge: he wants to gives more prominence to environmental cases and considers environmental crime a threat to the Earth. Judges, he says, have to do more to protect Nature, especially forested areas.

The Pasir Mas-born Arifin highlighted disparities in two cases: a man was fined only RM7000 by the magistrate’s court in Tumpat, Kelantan in 2005 for illegal possession of a dead tiger. He paid the fine and walked free. But a five-year jail sentence was meted out in another case for the theft of 11 cans of Tiger beer and Guinness Stout.

The Chief Justice’s statement comes not a moment too soon: theSun reported today that a magistrate’s court in George Town yesterday sentenced a trader to two years jail for breaking into Patchee Bakery along Dato Keramat Road and stealing a computer monitor worth only RM200.

Ultimately, sweet words alone are not enough. The new CJ’s biggest test will be to translate into results his talk of weeding out corruption and restoring the independence of the judiciary that was shattered in 1988. That, in the eyes of the public, is the KPI that matters the most.

Action speaks louder than comforting words.
Altantuya, Teoh Beng Hock, Kugan. Their souls are stirred for a retrial.
New CJ, are you serious?

Anil, Please read this piece by Tommy Thomas and then rethink your view of our Malaysian judiciary. Like I said, one swallow does not make a summer.

Like I said in the conclusion, the real test for the CJ is to what extent he can translate his good intentions into actually restoring the independence of the judiciary and weeding out corruption.

“Yet another progressive statement came from the new top judge: he wants to gives more prominence to environmental cases and considers environmental crime a threat to the Earth. Judges, he says, have to do more to protect Nature, especially forested areas.”

Let’s see what he wil do about the Lynas outrage
and the politicians’ reckless endangerment of the environment and the health of the people by approving this project.

Yes, that will be a key test.

Anil, you think one swallow makes a summer? Methinks you give too much credit to the judiciary to reform itself. Just because CJ Arifin Zakaria says it, does that mean it’s going to happen? Come on!!! What’s the use of judicial platitudes from the CJ anyway? Are mere press statements from the CJ of any value after all these years of judicial crap from his predecessors? If this CJ has any genuine courage and commitment to reforms, he will re-open the Altantuya murder trial and find out who the real masterminds of her murder were instead of allowing two low-rung… Read more »

Ya, Andrew, not only Altantuya, many more including Beng Hock…

I am not impressed with this CJ, not even a bit, he was citing and comparing the 2 kacang putih cases. Ya, why dont he cite Toyo’s case???

The Rakyat shall not be deceived anymore. We have had enough. ABU !!!

it’s a positive move. if we do not hope, nothing will happen.

moo_t, I agree with you…

Apparently, this is yet another kangoroo court keeper that fooling around with his “feels” than follow the books. If the law are pathetic to let “possession of a dead tiger” with a light sentences , it doesn’t mean you can “balance it out” with some jokes like this “But a five-year jail sentence was meted out in another case for the theft of 11 cans of Tiger beer and Guinness Stout.” So tell me, how long you going to keep a politikus behind the bar if compare to this case? 1,000,000 years? And don’t forget to compare that to Khir… Read more »

Yes, moot, you are right, not until the present government is oust, nothing is going to happen…

The Rakyat is sick with cakap cakap manis… no more… We want change !!!

a toyol stole millions for years but only got 1 year… how come? so its better to steal in the millions rather than rm200 worth?

Even a bomoh can do a more effective, deterrent job on mischievous toyols.
And in Boleh Land, only one toyol got ‘free’ unscathed on record!