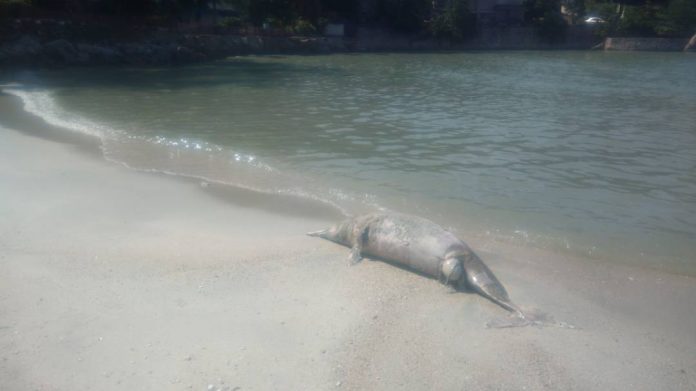 Two dolphins have been found dead on the beach in Tanjung Bunga in the space of six days. The first dead dolphin was found on 29 December 2017 (see photos below) and the second today (photo right at the top).

From what I understand, these are indo-pacific humpback dolphins. 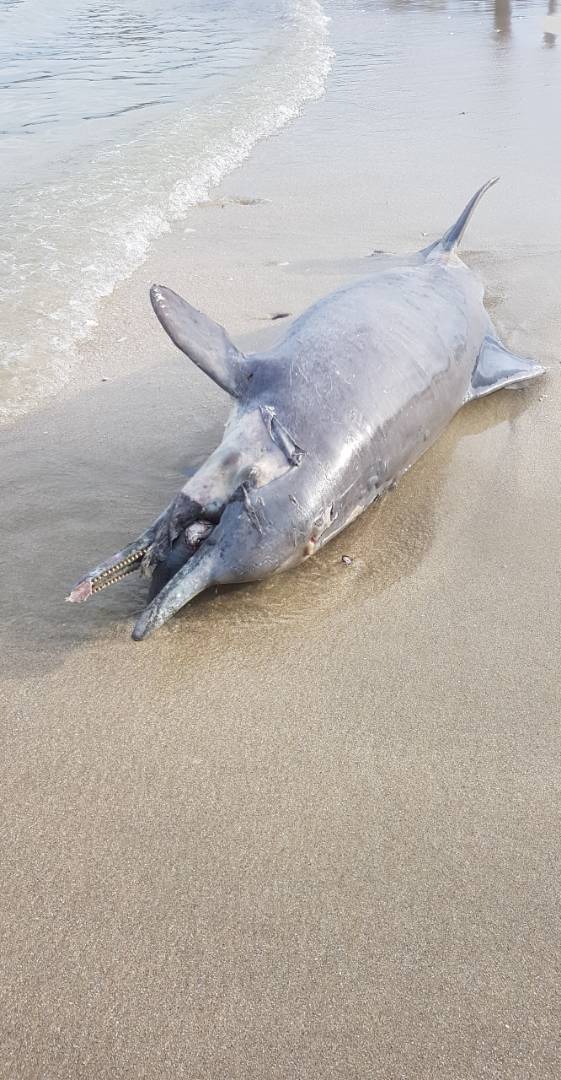 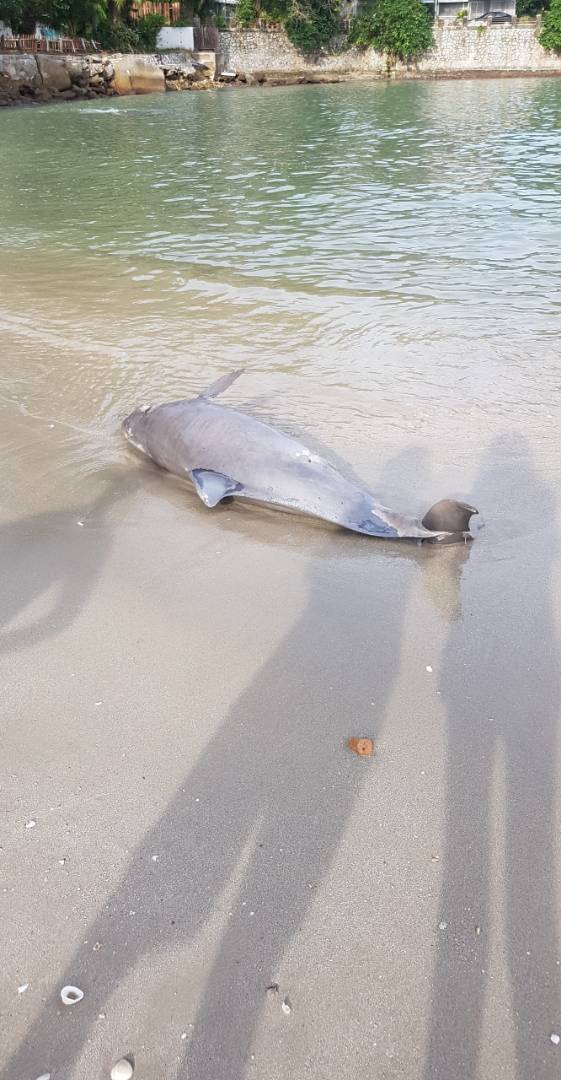 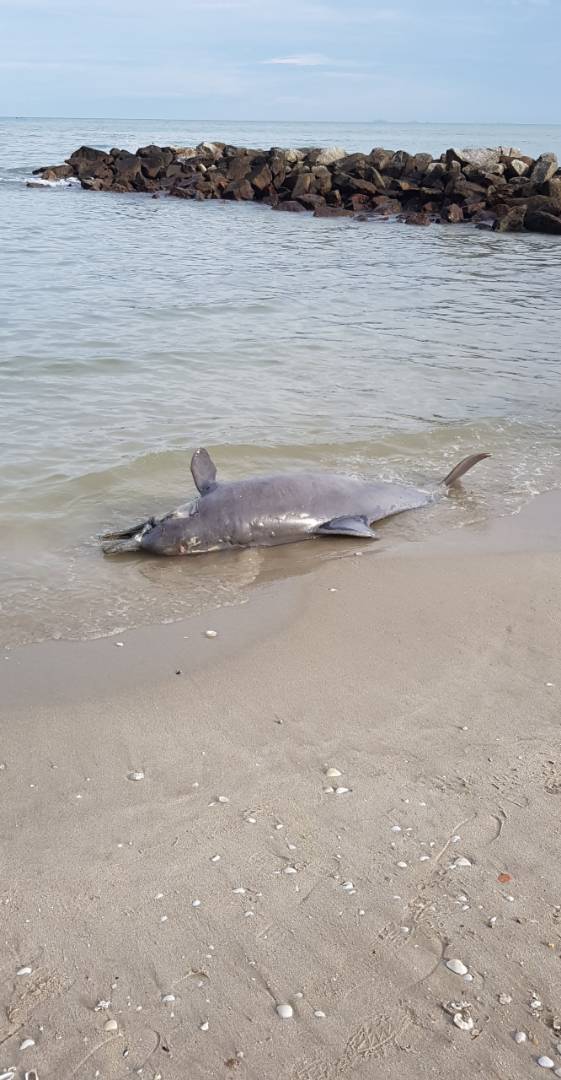 It is not often you see dolphins frolicking in the waters of Penang and when they do, they are a source of delight. So for two dolphins to be found dead in a week… well, something must be up. We need to establish why they are dying in Tanjung Bunga – natural causes, predators, pollution of the sea or toxic discharge from streams flowing into the sea, construction activity or excessive sedimentation?

Dolphins were spotted around Penang Island over the last couple of weeks. One Penang resident saw a few dolphins in the waters off Teluk Bahang on Christmas Eve. Another spotted a couple of dolphins near the Penang Bridge last Saturday morning.

Let’s take a closer look at the 2nd dolphin (below sharper + close up pics): The lower toothed beak is torn off at the tip. Laceration (tearing of skin) on right side of face + ear. Deep cuts near the blowhole (right at the head). Laceration on the right side end of tail before the flukes. My Observation: This unfortunate dolphin could have been hit on the right side by a speedboat or jet ski or trawler propeller. No telltale signs of jaw bites, so shark attack is ruled out. This is holiday season for those escaping the winter, so… Read more »

No speedboat or jet ski for hotel operstors along Tanjung Bungah or Batu Feringghi, let them change to become dolphins observation boat trips instead.

Anil can contact World Wildlife group to protect the dolphins.

tunglang must have watched many CSI series to make deduction on possible cause of death of dolphins
I tend to believe dolphins lost direction due to global sea warming, and could have been poisoned by polluted sea.
Migration pattern shifted thanks to ozone layer depletion

Ah pek. Our malaysian boats must be very fast speed boat which can outfox the dolphins. Those dolphins must be very deaf. Cannot hear the sonic sound from motor boats. Or Malaysia boleh. Now can export silencer to us navy for their subs.

Today, the main real enemy of the dolphin is the human. Although there are very few cultures which would kill dolphins to eat them in modern society, unsustainable fishing methods often kill dolphins accidentally as collateral damage. Dolphins can get caught up in trawling nets even if they were not the fishermen’s primary target. The tuna fishing industry is one which regularly takes dolphins as unwitting victims. The nets are incredibly strong to withstand the movement of thousands of fish which means that once a dolphin gets caught up in one, they stand no chance of escaping. It is a… Read more »

The chances of netting a dolphin by Penang fishermen of small boats with small nets are much, much lower than if one on a night fishing trip nets a bunch of black long hair of the penunggu laut (sea phantom) near Pulau Rimau.
Try it.

When buying canned tuna, make sure there is dolphin safe logo on it, meaning dophins not accidentally trapped and died in the process of net fishing.

January is the best time for Penangites?

The tourists have disappeared, the streets have fewer cars and the hawker joints are not so crowded.

Marine animals like dolphins are killed when feeding on plastics (mistaken as jellyfish) discarded into the ocean.

Please minimise the use of plastic bags.

Starry Eyed Buck is one of the culprits of mass disposable coffee cups.
Bin-chui lifestyle has a price to pay, but everyone suffers including those who don’t live bin-chui.
Kopitiam is still the better place without the bin-chui pretension nor habitual, irresponsible compounding waste of disposable lifestyle coffee cups.
Proponents of land reclamation may agree with disposable bin-chui coffee cups! Not all cosmo-lifestyles are habitually good.

McD plastic straws not biogradable also a culprit. Next time drink don’t sip to save earth.

Some time ago, a foreigner heard this comment about an exotic animal at a zoo, uttered by a Malaysian, that encapsulates the Capitalist world-view: “Can eat or not?”

We spotted 3 dolphins from the ferry on 1st Jan. Rare and impressive sight.

It must be because of pollution and the fault of Penang gov., for reclamation or, for building NEW roads ?

Yes must be building roads above the 200 king foot which PF has been complaining about hill slopes and affect the dolphins only. Other fishes like sea cows are not affected and well alive.

Human discharge accidentally polluted the sea, and May be carbon monoxide from motor vehicles find the way to choke the marine life???

The Paris Agreement goal of capping global warming at 1.5ºC will slip beyond reach unless nations act now to slash carbon pollution, curb energy demand, and suck CO2 from the air, according to a draft UN report. Without such efforts, “holding warming to 1.5ºC (2.7ºF) by the end of the 21st century [is] extremely unlikely,” said the 1,000-page report, prepared by hundreds of scientists. “There is a very high risk that under current emissions trajectories, and current national pledges, global warming will exceed 1.5ºC above preindustrial levels.” Dolphins escape from warmer ocean to seek refuge at Penang shore and die… Read more »