Aida Redza and her dance troupe WindRiver Productions lit up the night with a rousing performance during the finale of the George Town Festival recently.

The performance (video above) begins by tracing the memory of our shoreline along Beach Street, and as it moves up to the stage (video below), the dance starts to call attention to the concerns over our changing sea and landscape.

Reclaim serves as a stirring to create a call-to-action through dance on how we must first recover and protect the past before making forced changes to create a new future.

There is one bit in Part 1 above that I thought summed up the struggle between two competing visions for Penang – the bit where the guy says: “I dream of life; you dream of money.”

Why is it that in the process of chasing after money, we give up all the things which give meaning to life, all that is life-giving, all that sustains us.

Certainly, in the last general election, many Malaysians voted for Reformasi! – not Reklamasi.

And who better to articulate the opposition to the massive land reclamation in Penang than “Puteri Reformasi” Nurul Izzah Anwar, who wrote in her Facebook.

Her remarks have given an enormous filip to the #PenangTolakTambak campaign, which continues to grow in strength by the day.

Art of Diversion is the skills of CM Chow?
Are they planning to sell local street food and showcase dying heritage trades and arts there?
May be the fishes are water element to balance the metal LRT beam erected nearby?

Money can solve many earthly matters but can also destroy intrinsic values which could be more damaging to human life sustainance.

Former minister Rais Yatim has called for a cultural struggle to counter the spread of “Arabism” for the sake of preserving Malay culture.

Rais said that not many people would dare to talk about separating Arabs from Islam, but he insisted there was nothing about the region that made it better than the Malay archipelago.

“Saudi Arabia is now killing Yemen. Where is the Islamic culture in that? Who is setting an example for whom? I would like to suggest that Malaysia and Indonesia, in particular, give the world a great example.”

All upper primary school students in Singapore will participate in a 10-hour Coding programme students next year, to help them learn computational thinking. Emerging technologies such as artificial intelligence will also be covered.

In contrast, our Malaysian Primary 4 students will instead learn Khat calligraphy next year.

Thailand’s Ministry of Education will push for the inclusion of a third ‘language’, coding (computer programming language), in the curricula of Thai students, from kindergarten level if possible, said Deputy Education Minister Kalaya Sophonpanich on Friday.

Responding to the proposal to teach coding at schools, from Future Forward MP Kulthida Roongruangkiat during the debate on government’s policy statement, Khunying Kalaya said that it was her wish, since the election campaigning early this year, that Thai students should learn a third language, coding, in addition to English and their native language.

KUALA LUMPUR, Aug 10 ― Malaysia is trailing other countries in the digitisation of industries due to the Education Ministry’s misplaced priorities, Tun Daim Zainuddin wrote today.

He has bluntly said that Malaysia has failed to grasp the idea and importance of a knowledge-based economy.

He said the government’s economic policies are ineffective without a sound education system, noting the “snail’s pace” in educational reform, which he pinned on the ministry helmed by Maszlee Malik.

He blamed the entitled attitude on, noting that some Bumiputera even resort to racial fear-mongering to maintain their perks.

GEORGE TOWN, July 31 — Tanjong Tokong fishermen has warned their counterparts in the south of the island not to be fooled by any compensation the state government offered under the Penang South Reclamation (PSR) project.

The explanation of Khat or Khatt from Wikipedia, the free encyclopedia is explained as follows:- Islamic calligraphy is the artistic practice of handwriting and calligraphy, based upon the alphabet in the lands sharing a common Islamic cultural heritage. It includes Arabic Calligraphy, Ottoman, and Persian calligraphy.It is known in Arabic as khatt Islami (خط إسلامي‎), meaning Islamic line, design, or construction. The development of Islamic calligraphy is strongly tied to the Qur’an; chapters and excerpts from the Qur’an are a common and almost universal text upon which Islamic calligraphy is based. As such based on the above it is clear… Read more »

Historians looking to write an inclusive and comprehensive history of the nation are looking for public support to fund their project, which is aimed at balancing out government issue history textbooks often criticised for its political narrative and under-representation of minority groups.

How to prepare students for the Industrial Revolution 4.0? By learning more & diverse beautiful calligraphy arts?

Should learn Java script, not Jawi!

How to prepare for Industrial 4.0? 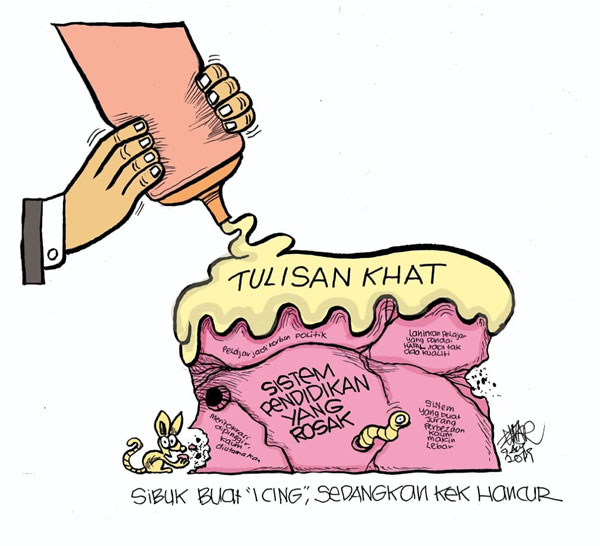 KUALA LUMPUR, Aug 2 — DAP veteran Lim Kit Siang has turned to the youth, daring them to dream big to achieve their full potentials to steer the country on the right path.

The Pakatan Harapan government has removed the requirement for Lynas Corp to repatriate its rare-earth processing waste as a precondition for its licence renewal.

Pakatan government is dreaming of $$$ from rare earth after the formation of US-Australia-Japan consortium to counter potential export ban of rare earth by China?

utusan melayu staff failed to get paid again, now can’t feed their kids and pay their monthly commitment and ….great…go tell them to dream of life , not dreaming of money…hehe