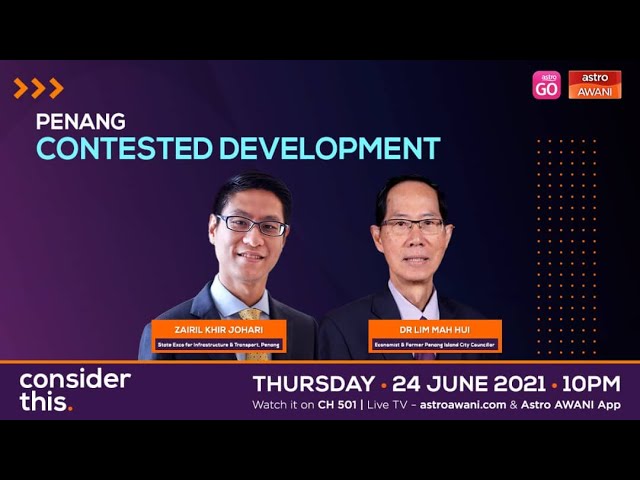 Look what was featured on Astro Awani tonight. You decide which side sounds more convincing.

This is only a snapshot of what’s wrong with the mega-reclamation off the southern coast of Penang Island.

You can see that the state government’s public relations strategy is to bang on job creation, by arguing that additional land from reclamation would entice foreign investors, thus creating more jobs in industry for the people.

But reclaimed land will be much more expensive than existing industrial land elsewhere in the peninsula such as in Kulim, or even in mainland Penang. So why should investors opt for pricier reclaimed land off Penang Island?

What the state government cannot run away from is that the original purpose of the reclamation was to raise funds for the bloated so-called PTMP. But transport infrastructure was just a pretext, as we long suspected, and now seems to have been dropped from the discourse. The focus now is on “job creation”, the new public relations strategy, in the hope that it will be enough to hoodwink the Penang public.

PETALING JAYA: The two sen per kilowatt-hour (kWh) rebate for all Tenaga Nasional Bhd (TNB) account holders will be extended for another six months from July 1 until Dec 31 but at a slightly reduced rate.”

Is Penang state / PBA coming up with any REBATES on water usage for its users in Penang. TNB is doing its part .

Zairil, your points to justify 3 reclaimed islands are too simplistic. Firstly you are now singing alternative version of original song by linking 3 Islands with Jobs Creations and delinking it with Penang Transport Master Plan? Isn’t PTMP a major idea for Penangites (Voters) to overcome traffic woes (mobility issues) that require financing from 3 reclaimed islands? The original concept is to follow Johor’s Forest City aspirations of modern extravagant lifestyle homes for the privileged ones whose speculative “investments” able to finance the LRT/Highways via Project Delivery Partners (basically the Developers)? Secondly by creating new lands for investors to create… Read more »

Commonwealth gomen only spend $$$ in KL and Kelang Valley. Pengland ais kosong. How many ah bengs and ah lians take buses run by Transport Minister We? In other countries, bus companies run express buses with limited at peak hours. Bus companies have their bus lanes.
In Pengland, is one size fits all. Why cant Rapid buses build their own busways to entice riders? Instead Rapid has to depend on the state? Rapid paid road tax not to Mr Chow but to Mr We. Mr We there should improve public transport.

PTMP for a small Penang Island with 800K population is too costly to bear with risky ROI.

Why can’t Penang be self innovative to think of ways to create jobs for its redidents other thdn the running out formula of Foreign Investments? How about Local Direct Investment LDI to spur economy from now on with paradym shift in mindsets?

shrik
Reply to  Ray of Light

yes, shift mindset. why Pengland kias dont move to seberang to stay? Same with those from PForum? Leadership by examples. Or like teh susu saying moving to Kelantan to avoid onslaught of development in Pengland but terbalik his decisions. as Pas Kelantan is not PASS.
Spur the economy but where are the talented workers? Same result if PForummers are still staying in Pengland, how to expect top financer, engineers, master minds to stay in seberang when a losman worker can enjoy the facilities and amenities in Pengland island?

A new prototype for modern living?

There you are. It is innovative and attract investments.

glissantia
Reply to  Ray of Light

Capitalism or “neo-liberalism” means opting for the most expensive and biggest project/contract you can get away with. Regardless of whether it is called private, privatisation, public-private partnership, FDI, JV, etc., the public pays.

Because of the repeated MCO cycles, many are now raising white flags…

PSR could spell the end for Penang’s delicious large prawns

overfishing, what big prawns? prawns become smaller and smaller until no more prawns as we know mankind has over fish. Instead of hunting like cavemen, Sink apor think smart and add value by prawn farming. Pengland kias still hunting

Any hope for Phase 2?

Here is the video on the Penang contested development:

We think progress for healthy stomach. You dream fishermen’s catch.
We think preserving mountains and nature. You think build, build on island.

Johor Forest City should have been built on land as there is so much space. Penang Island has no space.

Why is Singapore so successful? Reclaiming till now.
They fly in their seafood from Sabah. Penang could do that and expand the economy.

We don’t want `Kampong Mentality’. Keep that on the mainland.

oh i see,but this is Penang,who cares of Singapore,you can move to Singapore if you want.