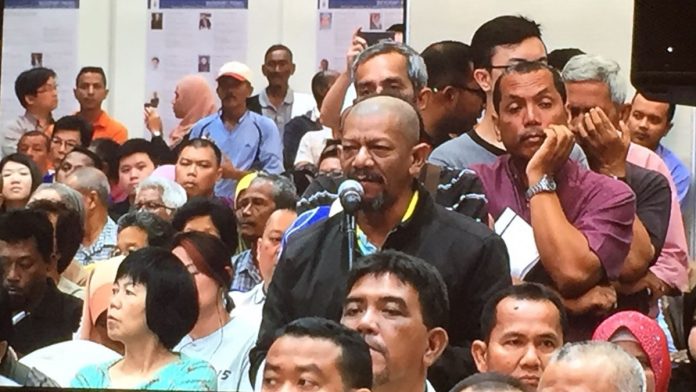 A large crowd has packed a hotel convention room in Teluk Kumbar for a public consultation on the environmental impact assessment study of the massive land reclamation plan off the coast of southern Penang Island.

The ill-conceived plan involves the creation of three artificial islands totalling almost 4,500 acres. Two islands would be created under the first phase and and a third island under the second phase.

Most of the homes that will be created are likely to be priced beyond the reach of ordinary Penangites (only about 20 per cent will be “affordable”); so it is unclear where the bulk of the projected 300,000-400,000 people on the island will come from. 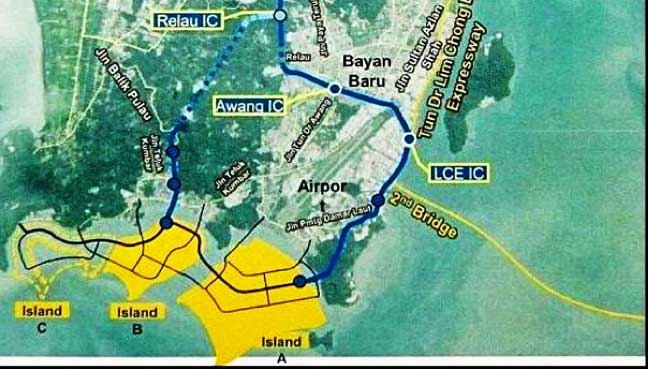 Fishermen’s association representatives are peppering the consultants with questions and strong objections to the disproportionate reclamation plans. They claim their livelihood would be jeopardised as a huge chunk of their fishing grounds would be destroyed.

One of them says the consultants’ study on the state of the sea was not convincing. “We know the sea better.”

Another complains there has not been enough study of the habitat for the plankton. “It is not so easy. It will be difficult for us to cari makan. We object!”

But yet another fishermen’s representative objects, pointing out that the fishing community would surely lose out in the long run. “We are not convinced by all these so-called studies… We are real fishermen for already a few generations… the consultants are only for the economy… not looking after the welfare of fishermen.”

Still the fishermen queue up on the floor. Another says, “All the slides beautiful cukup! Very angry… see Tanjung Tokong development, the fishing all gone! I am sad now… is this win-win?”

Another takes to the mike: “I represent all fishermen… all have stood up to object… but where are you all?… most already have left the hall? What about the livelihood for our generations? No need for me to elaborate. I object on behalf of all.”

Check out this ridiculous slide listing some of the control measures to offset the impact of the land reclamation and loss of fishing grounds: 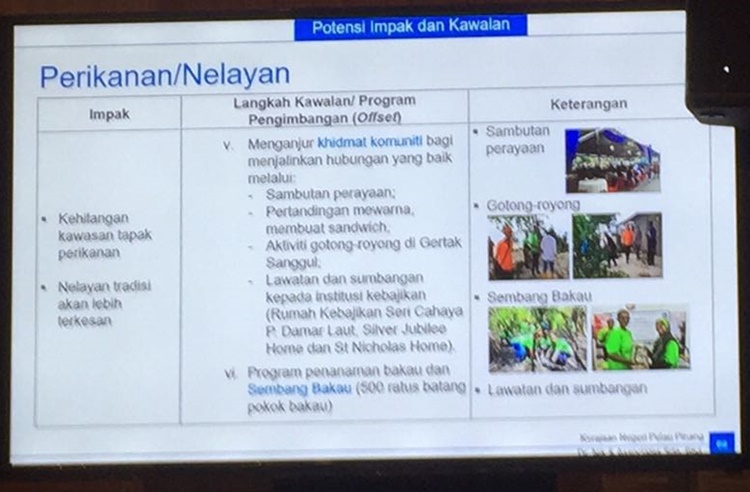 Colouring competitions, celebration of festivals, sandwich-making and gotong-royong? Seriously? To offset the loss of fishing grounds of the fishing community and the food security of the residents of Penang?

No wonder the fisherfolk are upset.

Other residents raise concerns about the impact on traffic, agriculture, aquaculture and the pig trade during the reclamation work.

After the consultation, the fisher folk staged a protest in the vicinity.

In such contestations between politically backed Big Business and local community interests, it is easy to see who the winners and losers are.

Malaysia could lose nearly all of its fish production in south-west Johor if reclamation works like the one in the Forest City project is allowed to proceed, warned the Johor Pakatan Rakyat Research Centre (Joprec):

Ladies & Gentlemen, There is no doubt that the [alleged] Singaporean Trojan Horse DAP State Government of Pulau Pinang has thrown overboard the Principles of Good Governance and Transparency of its Creator and Mentor Lee Kuan Yew. The PAP Singapore Government never do deals with the Private Sector. It owns all the Projects and invites the contractors to bid unlike the DAP State Government of Pulau Pinang which do business with the Private Sector which finances and owns the Projects. Questions on valuations, costs, tenure, conflict of interests, ethics and propriety will arise on why for 50 years the DAP… Read more »

How can Penang state can compare to Sing gomen.? They can afford to have F16 planes , tanks, Submarines, training in Taiwan, australia and best scholars studying in red bricks unis in UK and USA.

How come the U-turn now? I read countless loving affinity with SingLand in matters of development & economic success of wannabe (of CAT). How come?
Never mind. This is exactly another day of spinning just for argument sake (pasar malam style).

In some countries, fishing is controlled by season (to the day) and type of fish. Here, fishermen in general are ignored and get a poor deal. Some succumb to selling their catch – and even their diesel – to foreigners waiting on boats. We get the left-over, old stuff disguised with formaldehyde, salt, etc.

If you want to stop all these land reclaimation, organise a unified protest by all non politically affiliated NGOs and attack the DEMAND for such reclaimation projects. Instill awareness in the population, consumers and would be buyers. If there are products that are endorsed as “environmentally friendly”, “animal friendly”, “using recycled material”, etc , so do development projects.

Penang does not need an international airport which occupies so much space including associated logistics. Further it cause noise pollution and residents in fear of flight overhead. Why not organise a mammoth support and move it to Kedah? Airplanes bring millions of people and disrupt lives of penang lang. Penang lang only knows how to serve people in tourist industry

pg lang expect fishes to grow in population so they will catch more under present coastal line so they are more productive? so pg lang will eat the fish which heavy metal wash from vehicles running on road surface. good luck with support from pg forum

Malaysians love seafood and are the biggest consumers of seafood in Southeast Asia. However, did you know that in 40 years we run the risk of not having any seafood to eat, if we continue to consume indiscriminately? Deciding what seafood to order at the restaurant and what to purchase at the supermarket can shape the future of our global marine environment. Driven by our insatiable demand for seafood, Malaysia’s fishery resources have been over-exploited and almost 90% of Malaysia’s demersal (bottom-dwelling) fish stock has declined in some fishing areas, due to unsustainable fishing practices, pushing fishery resources to the… Read more »

From north (Tg Tokong-Gurney, Tg Bungah, Batu Ferringhi) to east (Pulau Jerejak) & now to south (Gertak Sangul, Teluk Kumbar), we may not see an end to these sea grabbing hunger of sea reclamation development, the unmistakable hallmark of a state gomen gone overdrive mad! Except for the last frontier of Muka Head, Pantai Kerachut & Teluk Kampi (which border untouchable Penang Forest Reserve), we are going to see more of such madness coming to Pulau Betong, Sungai Burung, Balik Pulau & Sungai Pinang in the foreseeable future. Nothing of such unprecedented development have we witness before 308, but rest… Read more »

Tak perlu tertekan lulus projek tambak Pulau Pinang, kata Umno http://www.freemalaysiatoday.com/category/bahasa/2016/12/18/tak-perlu-tertekan-lulus-projek-tambak-pulau-pinang-kata-umno/?utm_source=feedburner&utm_medium=email&utm_campaign=Feed%3A+FreeMalaysiaToday+%28FMT+News%29 Jabatan Alam Sekitar (JAS) as a responsible steward of our environment, hopefully is not ‘stressed’ to give a quickie approval to CAT, a synonymn for responsible governance (what a self-contradiction). A far-sighted vision is much needed than the present narrow tunnel vision of those who turn to quickie solutions but actually are skewed toward private self-interest & super-profiteering for those with “Money Can Talk Louder”. It would be a challenge to overcome those political traders whose prime interests go far beyond the commons & environment. This is a problem… Read more »

Why Umno dare not comment on those frenzy development in Iskandar Johor with so many condo projects by China developers?

Q: Do Penangites need the 3 islands? Q: Where will the projected 300,000-400,000 people (who are so rich) to populate the 3 islands come from? Q: Who can afford the high priced homes on the 3 islands? This “behemoth” of triple-sea gorging land reclamations still smells fishy trying to reassure us of its EIA merits, seeing what has already happened to fisher folks in Johor & the environmental impact on the Straits of Johor & surrounding seas of Singapore. Who among us Penangites can truly afford or drive south to one of the 3 island’s private hospital (more for the… Read more »

try harder. expect under present coastal line fish will grow more or from sumatra migrate to penang and hence price will be cheaper fishermen will be better with more income.